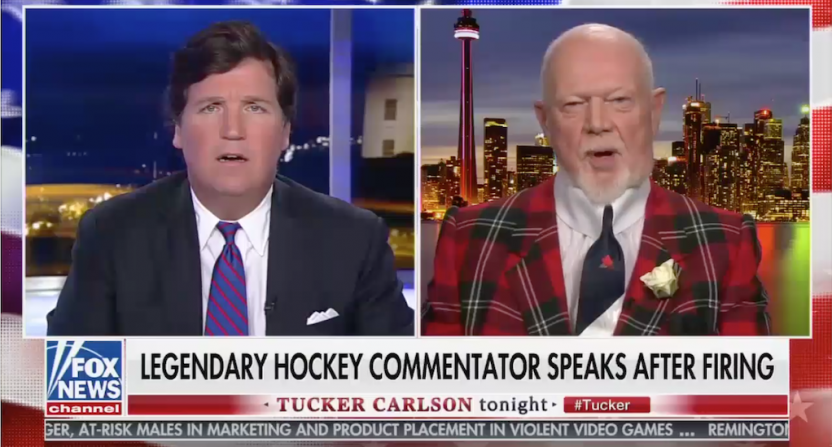 Recently fired Hockey Night in Canada commentator Don Cherry found another television outlet that allowed him to express his views Tuesday night. Cherry appeared on Tucker Carlson’s Fox News show, presumably to defend himself and perhaps clarify the remarks that resulted in his dismissal.

On the “Coach’s Corner” segment during Saturday’s Hockey Night in Canada telecast, Cherry went on a tirade about immigrants neglecting to wear a poppy pin to honor the military for Canada’s Remembrance Day. The troubling part of his comments concerned “you people” who “come here” for “our milk and honey.”

If you haven’t already seen it, you can watch the segment here:

ICYMI here's Don Cherry being a POS by shaming immigrants for not buying poppies pic.twitter.com/kwTugoZGI6

Cherry stood by his remarks to outlets such as the Toronto Sun. And when a bigger platform presented itself, the pundit donned his signature collar and garish blazer to defend himself on an American cable network.

Of course, Carlson’s show isn’t the outlet for insight, nuance, and thoughtfulness. The Fox News host, showing a vague interest in hockey and Canadian history, was far more interested in using Cherry’s situation to vent his own opinions against those offended by the hockey analyst’s anti-immigrant sentiments, calling them “fascists” who fake their outrage and “have no real feelings.”

Though Cherry eventually admitted that he could have used more inclusive language in his criticism, his views toward immigrants and social change once again became apparent, egged on by Carlson asking how much Canada has changed in the 38 years Cherry has been on the air. (As Awful Announcing’s Andrew Bucholtz noted, Cherry has made a career of controversial, antagonistic remarks.)

Carlson responded by rambling about northern Quebec and what it was like 50 years ago, something he didn’t exactly state with authority. Even Cherry didn’t seem to know what Carlson was talking about, quickly reiterating his point about people wearing poppies on Remembrance Day.

But what exactly changed in Cherry’s view? What are the changes he’s railing about? What’s stayed the same in those smaller cities that apparently harkens back to a Canada which Cherry views more affectionately? Unfortunately, he comes off like an old man (Cherry is 85) who has looked around, is shocked how much the world has changed, and doesn’t like what he sees. He’ll no longer have a TV outlet to express those sentiments, unless Carlson wants to make him a regular on his show.