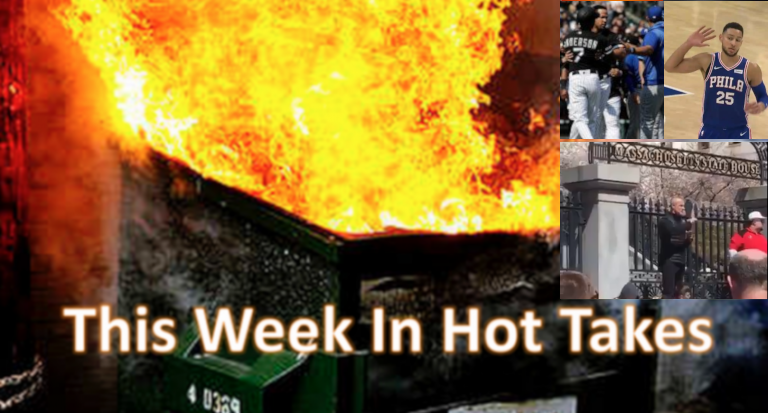 Welcome to another edition of This Week In Hot Takes. This time, we’re looking at the hottest takes from April 12 to 18.

5. Pierre McGuire says “At this point in the game it’s not an analytics sport, it’s a character sport“: NBC’s McGuire has long been known for bashing hockey analytics, and he continued that this week in the Blue Jackets-Lightning series:

And somehow there's people who actually think this guy should be the #Sabres coach everytime there's a vacancy???? #HockeyTwitter

“You get to this part in the game it’s not an analytics sport, it’s a character sport. It’s about shot blocking, winning battles.” Pierre McGuire

There could maybe be a point here if McGuire was pointing out specific advanced analytics he didn’t think were relevant to the situation. But he didn’t do that, just saying “it’s not an analytics sport.” Hate to break it to you, Pierre, but a lot of advanced hockey analytics are focused on possession (or “winning battles”), and  “analytics” in general is just “the systematic computational analysis of data or statistics.” As the world’s foremost distributor of data about where NHL players played junior hockey, it’s interesting that McGuire is so negative on other data that’s much more meaningful.

4. Aaron Taylor says Kyler Murray could fall out of the first round if he isn’t picked first overall: The NFL draft often leads to some out-there takes, and this one from CBSSN’s Aaron Taylor is no exception:

“If Arizona doesn’t take Murray, I project that he could possibly fall all the way out of the first round.”@AaronTaylorCFB with a BOLD take on Kyler Murray. pic.twitter.com/3Ftq5AyTFa

Yes, different teams have different valuations on players, and yes, Murray might be a particularly good fit for new Cardinals’ head coach Kliff Kingsbury. But “possibly fall all the way out of the first round” is a huge stretch. Murray’s been widely projected to go first overall, and even if he doesn’t, it seems extremely unlikely that he wouldn’t be taken until at least the 33rd overall pick. There have been a whole lot of quarterbacks with bigger question marks than Murray who have gone in the first round, and the idea of a player projected either as #1 or #33 or after is insane. Taylor could have had a fair point with “he could possibly fall,” but “all the way out of the first round” is a hot take.

3. Michael Rapaport says “The only thing [Ben] Simmons has won is a Kardashian”: Noted internet provocateur Michael Rapaport is at it again, this time showing up on FS1’s Undisputed with some strange criticisms of Philadelphia 76ers’ guard Ben Simmons.

This is an exceptionally dumb version of “count the rings,” which is a dumb argument to begin with. Who Simmons is dating isn’t important, and he’s only 22 and has only been in the NBA for three seasons (including his rookie year, where he didn’t play after an injury). There can be other things you can criticize the Sixers for, especially after their Game 2 loss to the Nets Monday, but this is a lame one. (Oh, and they won by 16 points last night, so Rapaport’s rant is already a bit off target.)

2. Randal Grichuk and Danny Kanell offer silly anti-celebration takes: Baseball celebrations were in focus this week thanks to Chicago White Sox shortstop Tim Anderson hitting a home run, celebrating with a bat flip, and then getting drilled and ejected. Toronto Blue Jays’ outfielder Randal Grichuk weighed in on this in an extremely dumb way, throwing out a tweet that seemed like a particular criticism of Anderson and then getting annoyed when Anderson responded:

Grichuk then doubled down in comments to media:

Grichuk was surprised at the reaction to his tweet #BlueJays
“Most definitely. I kind of felt like I was saying a generalized statement, something I’ve wanted to say for a long time and a lot of people got offended by it. It really shocked me, honestly.”

More Grichuk: "It’s a fine line. I was always taught from the day I started playing ball, respect your opponent, respect the game and go about it the right way. I feel like I always have and I think every guy likes to have a little fun and show personality, but it’s a fine line."

“Go about it the right way” is a lot of garbage, as who’s to say that Grichuk’s way is “right” and Anderson’s isn’t? But it’s also particularly ridiculous that Grichuk did this and then was “shocked” that people were annoyed with him trying to restrict how other players celebrate. He’s not the only one with anti-celebration takes, though, as CBS Sports HQ’s Danny Kanell also delivered one of those:

The road we're headed down by encouraging bat flips is followed by pitchers fist pumping and acting a fool after every strikeout. Then we've got everyone jumping around like idiots in the 3rd inning. Who wants to see that???

Well, Danny, slippery slope arguments are a bad idea in general, but “everyone jumping around” in celebration sure seems to have ruined the popularity of football and basketball, right?

1. Merril Hoge says “We’re allowing a university to cheat, lie and abuse/suppress science”: Former NFL player and ESPN analyst Merril Hoge has been ranting against concussion research for a long time, even co-writing a book called “Brainwashed: The Bad Science Behind CTE and the Plot to Destroy Football” last year (which is pretty much as bad as you’d think). This week, he took that to a new level, bashing the Boston University team that’s led much of this research and claiming in a rally in front of the Massachusetts State House that “we’re allowing a university to cheat, lie and suppress science.”

As I told the young football players, parents, and youth football supporters yesterday, #BU has created a narrative. We don’t allow our kids to cheat and lie, but we’re allowing a university to cheat, lie, and abuse/suppress science. That’s harmful to people and it’s wrong. pic.twitter.com/GnWMx4GgnK

There’s no compelling evidence for any of that, and really, the main “suppress science” here feels like it’s more from Hoge and his ilk for regularly going after concussion research. If anyone wanted to see “what if anti-vaxxers, but sports?”, here you are…

Honorable mention: David Shoalts is upset the NHL has games on Easter:

Nice to know the NHL and NBC have the fans' interests at heart. Game 6 of Leafs-Bruins series is Easter Sunday. Game time has still not been determined. Good luck with those family plans on one of the holiest days of the year.

Games have been played on Easter and other religious holidays forever, without any noticeable decline in ratings, and it’s pretty silly to say that leagues should avoid one religion’s holiday but not others. This may not be ideal for Shoalts, but extending that to “the fans’ interests” is ridiculous; there will be plenty who will happily watch Sunday, regardless of religion or family plans. Just because it doesn’t work for you doesn’t make it a bad move.