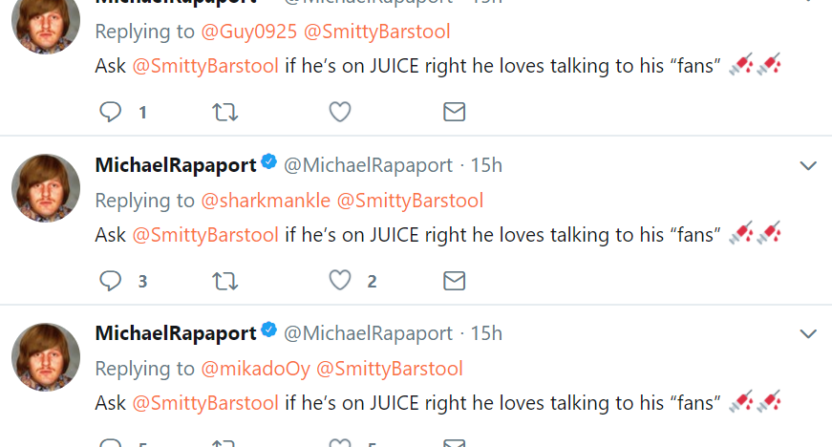 The morning, after a lengthy Twitter fight between actor/podcaster Michael Rapaport and just about every Barstool personality, company president Dave Portnoy took to Twitter to announce Rapaport’s dismissal:

Rapaport spent his Saturday night tweeting about Adam Smith (@smittybarstool) and whether or not he used steroids prior to his recent Rough N’ Rowdy victory, an accusation first-promoted on the central Barstool account:

After a great night of fighting at #RoughNRowdy self proclaimed boxing expert @MichaelRapaport is apparently accusing the winner @SmittyBarstool of being on
PED’s aka JUICE.Rumors have been swirling since the fight ended.
Should Smitty take a PED test? pic.twitter.com/EzKQGxhZML

Rapaport’s Twitter feed from last night is, well, an interesting read, but it seems most of what got him fired came from this tweet (and others like it expressing the same general sentiments):

if you call yourself a fucking stoolie for real, you've already lost in life

That prompted plenty of the brand’s most recognizable faces to jump into the fray:

I was a stoolie before becoming an employee for the pirate ship.. Proud of that too. Just thought I’d reinforce that fact, so everybody at @barstoolsports knows where @barstoolhrtland sits in this Saturday night stoolie drama sitch pic.twitter.com/omoYbm22PB

I know Stoolies weirdly don’t think I’m loyal but the truth is I was (key word was) friends with Rapaport until last night. Kind of a hard position to be in, he showed his true colors though and Dave firing makes it a lot easier here https://t.co/x3JT0nskSH

Didn't mind the Stoolies when you were trying to sell them your dumb ass book and begging to be in the newsletter https://t.co/vu7TMVKGmF

Rapaport got even more personal from there, though Portnoy maintained it was the fan insult that led to his firing:

Kinda like what you did to your Wife and family?
Shitted on something a lot of people had been working on for a while? https://t.co/iQgLZMarGh

Rapaport’s work with Barstool included a podcast on their network (helpfully titled I AM RAPAPORT), but considering how happy his removal has made most of the biggest names at the company, it seems like they’ll be fine without him.

The entire incident did also lead to this objectively funny moment, when Portnoy texted the wrong Rapaport to let him know he was fired:

When I accidently told @RapSheet he was fired this morning. pic.twitter.com/i1h80pdnk0

A harrowing few minutes, no doubt. But I’m back, baby. ?? https://t.co/Tuoz2aYKPL

It appears Rapaport’s initial comparison of him joining Barstool to Shaquille O’Neal joining the Miami Heat was more accurate than anyone could have realized at the time – like Shaq and the Heat, the relationship between Rapaport and Barstool came to a vitriolic, chaotic end.

UPDATE: The Rapaport and Portnoy feud continues throughout the day on Twitter. Many people have wondered if it’s fake, though Portnoy claims such people are “nuts.”

Here are some of their latest tweets in the back-and-forth:

I went from paying you hundreds of thousands of dollars to post videos for us on our main twitter account to having you do it for free in 24 hours. @MichaelRapaport https://t.co/dJWx69mJ5o

I’m the fucking President now!
Sashaying ass frat boy can’t out rant me on his own account #VivaLaRapaport pic.twitter.com/M04xSVgy2r

Hey ding dong brains. I know you haven’t figured out social media yet, but you posted yours on our main account vs my personal. It’s embarrassing it’s that close. And it’s 2 million total views for Barstool so thanks. I’m smarter than you so just stay murdered. @MichaelRapaport https://t.co/A7lJnpSohw

Your Father is my Biggest Fan & that’s all facts.
I own everything about you ChickenHead@stoolpresidente @barstoolsports https://t.co/sNPkIFzSNq

Now roll over, let me pet your belly, say thank you for introducing you to people under 40 and fade back into Bolivian where you belong @MichaelRapaport pic.twitter.com/vbJArvY3Xx

You 40yrs old, stay on that Booger Sugar,hang out in frat houses and you still ain’t getting pussy.
How much you lying your loyal @barstoolsports employees to slave in the radio for you 100 Million Dollar Ho https://t.co/wuoPWfVbMc

You are embarrassing yourself. I don’t hate you. I don’t want to hurt you. I’m not @SmittyBarstool Just roll over and let me pet your belly and I’ll stop this beat down. https://t.co/shSCy69FpP

Yo @stoolpresidenteYOU made 100K off T-shirts today but you have longtime loyal @barstoolsports employees aka Stoles working on @BarstoolRadio 100% FREE. You told me that empathetically last time spoke right with @EKANardini https://t.co/YjBVVPZDI5

People who think feud is fake are nuts. Yeah I made 100k off @MichaelRapaport clown shirts today and a shit ton more on traffic he gave us (his biggest day) but that wasn’t what I wanted. I liked Mike. He just went insane and had to be put down like a wounded animal

Yo @stoolpresidenteYOU made 100K off T-shirts today but you have longtime loyal @barstoolsports employees aka Stoles working on @BarstoolRadio 100% FREE. You told me that empathetically last time spoke right with @EKANardini https://t.co/YjBVVPZDI5

You mean like me, Kfc and Bigcat? You are so dumb it’s surreal. You make my arguments before I can. We hired lots of new talent for Sirius. We pay them. We didn’t give you your show because frankly everybody hates you. I was just being nice. Still am. https://t.co/CbvGHf9n17

if being hoped up on Steroids makes you smart, probably so. #JuiceHeadSMitty

Your Father is my biggest fan, he loves my style. https://t.co/DWus0yJuJO

You just went back to my dad joke? You tweeted that like 3 tweets ago? We’re already on recycled tweets? And bad ones at that? Yikes. ???I’m going to bed. Now is your chance. Say I get no pussy again or I’m 40 or have no hair. All killer material. @MichaelRapaport https://t.co/bL1k4i96EM