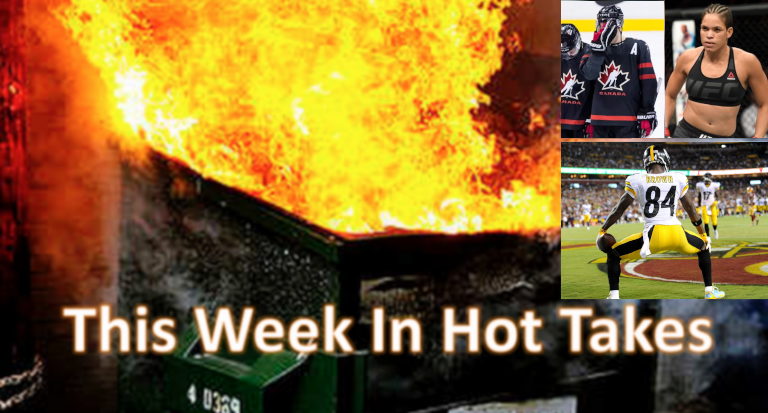 Welcome back to This Week In Hot Takes! This time around, we’re looking at takes from Dec. 28-Jan 4. (One this morning snuck in under the wire.)

5. Don Cherry blames Canada’s World Junior Championships loss to Finland…on their 14-0 win over Denmark? Takes against teams supposedly “running up the score” are always fun; it seems dumb to tell players to just stop playing once they’re ahead, especially in sports where individual stats often matter. But Canadian hockey commentator Don Cherry took it to a whole new level Wednesday, saying that the Canadian men’s national junior team’s 2-1 overtime loss to Finland in the quarterfinals of the World Junior Championships was thanks to…their 14-0 win over Denmark in round-robin play.

Denmark is not Finland, and there’s no actual correlation between those two events other than mumbo-jumbo about “the hockey gods”; it seems unlikely that Canada instead winning 2-0 or 3-0 win against Denmark would have changed anything at all in the quarterfinals game. But sure, argue “They lost because they previously won by too much.”

4. Darren Rovell says Amanda Nunes has “singlehandedly killed the most valuable women in the sport,” her win is “brutally damaging to UFC”: Action Network’s Rovell has long been known for strange takes about athletes’ and sports’ bottom lines, and he delivered on that again this week, claiming that Amanda Nunes’ UFC 232 win over Cris Cyborg Saturday was “brutally damaging for UFC” and she “isn’t in the same marketing ballpark” as Cyborg or Ronda Rousey (who Nunes previously beat at UFC 207 in 2016, Rousey’s last MMA fight before she left for WWE):

Between Rousey and Cyborg, Amanda Nunes has singlehandedly killed the most valuable women in the sport.

Nunes isn't in the same marketing ballpark as either of those two.

Rovell understandably took a lot of criticism for that, including from UFC president Dana White:

Dana White does not like Darren Rovell much pic.twitter.com/ZUNMmx82u5

Rovell then doubled down the next day with a piece headlined “Amanda Nunes’ Greatness Doesn’t Make Her Marketable — And Dana White Knows It“:

My response to @danawhite, who put on a great “show” last night. UFC’s actions, Nunes’ lack of endorsements from the free market, and her historically low PPV buys backs up my tweet https://t.co/qm5c9Tj34O

In there, Rovell cites everything from PPV numbers to Instagram followers to endorsement deals, but what he’s really proving is that he used the wrong wording in the first place. He can prove that Nunes currently has fewer followers and endorsement deals than Cyborg and others, and that her past non-Rousey PPVs haven’t performed as well as some other fighters’ PPV matchups (but she should get some of the credit for the numbers for the fights with Rousey and Cyborg too), but that doesn’t say anything about her current marketability or if her win is “brutally damaging for UFC.”

Big wins like this one tend to give athletes a significant boost, and while Nunes hasn’t always wanted to play the marketing game the way others have, she’ll certainly at least have more opportunities in the wake of this one. It’s also notable that this was her eighth UFC win in a row, and her fifth straight in a main event; that’s going to further help get Nunes on the wider radar. And her win may not wind up being “damaging” for the UFC at all; as Julie Kedzie noted on Twitter, we’ve heard this narrative before, including with a victory that helped put Cyborg on the map.

Female fighters have cemented a place in MMA that’s a little harder to kill than some people seem to think.

Indeed. If Rovell wants to claim that Nunes is currently less known and less popular than Cyborg, there’s a case there. But that doesn’t mean she always will be, especially as the impact of this win hasn’t yet been considered in her “marketing ballpark.” And it doesn’t make her win “brutally damaging to UFC.” If anything, it gives them an opportunity to promote a different face, and one with a remarkable resume at this point. And it sets White up to look good with an easy dunk on Rovell, which only goes to further help promote Nunes. So congrats on helping to ruin your own “brutally damaging to UFC” narrative, Darren.

3. Peter King  publicly changes All-Pro ballot because he”can’t in good conscience” give Antonio Brown a vote: There have been a whole lot of takes out there on the Antonio Brown-Pittsburgh Steelers divide, and NBC’s King brought a significant amount of grandstanding to his. On NBCSN’s Pro Football Talk Live Friday morning, King said he removed Brown from his All-Pro ballot thanks to that feud with the team, claiming he “can’t in good conscience put a guy who took the equivalent of six percent of the season and flushed it down the toilet”:

Peter King says he took Antonio Brown off of his All-Pro ballot because of his situation with the Steelers. pic.twitter.com/v4GwPmi0Ey

As AA’s Phillip Bupp wrote in our above-linked piece on this, the bigger issue is King making this a public stand about conscience. When King submitted his ballot Monday, he had Brown, DeAndre Hopkins and Tyreek Hill, but he opted to change that vote to Michael Thomas afterwards thanks to reporting about Brown skipping practices and the Steelers benching him for Sunday’s final game as a result. A Hopkins/Hill/Thomas ballot would have been quite defensible, with those players being second, fourth and sixth in the NFL in receiving yards (Brown is 11th), but it’s the grandstanding about this that’s silly.

And that’s particularly true considering that King previously argued that only performance on the field matters, going to the wall to defend Darren Sharper’s Hall of Fame candidacy while Sharper was facing serial rape charges in multiple states (Sharper would eventually plead guilty to sexual assault of 16 women in four states, and has decades ahead on multiple prison sentences). So multiple charges of sexual assault won’t get King to treat a player differently in a vote, but reporting about skipping practices will. Okay then.

Antonio​ Brown is a coward.

Actually, it​ might not​ be​ harsh​ enough. But this being Pittsburgh, where the​ term​ “blue collar”​​ remains aspirational, calling somebody a “coward” remains a damning critique of a person’s character.

But who are we kidding? When it comes to his actions inside the Pittsburgh Steelers organization, Brown lacks character. Cowards always do.

…Despite his indisputable numbers and his unmatchable talent, he never again should be mentioned as one of the all-time Steelers.

He should never again play for the Steelers.

Now that’s the kind of in-depth journalism worth subscribing to The Athletic for! Remember, as every writer who goes there will tell you, storytelling matters, not hot takes.

1. Greg Gabriel claims NFL teams were wise to avoid Antonio Brown in draft, “teams know what they’re doing”: The wildest take on the Brown situation isn’t Rossi’s, though. It’s from former NFL scout Greg Gabriel (seen here last February defending Bill Polian’s take that Lamar Jackson is short and should switch to WR, and claiming that  Louisville “does not have a very complex offense” and “quarterbacks who come from those types of offenses often struggle when they get into the league“; how’s that one holding up, Greg?), who used this week’s events to retroactively defend teams passing on Brown in the 2010 NFL draft, where he was picked 195th overall:

Football fans for years have been critical of scouts because Antonio Brown slid 6th round. I think we’ve seen in the last few days why. There were issues while he was in college, so he fell. Teams know what they are doing

Ah, yes, a few skipped practices and a potential trade demand nine years later are totally worth passing on a player who’s been a seven-time Pro Bowl selection and a four-time All-Pro pick, has 11,207 regular-season receiving yards to date, and has twice led the NFL in receiving yards, twice led the league in receptions, and posted league-high touchdown numbers this year despite only playing in 15 games.