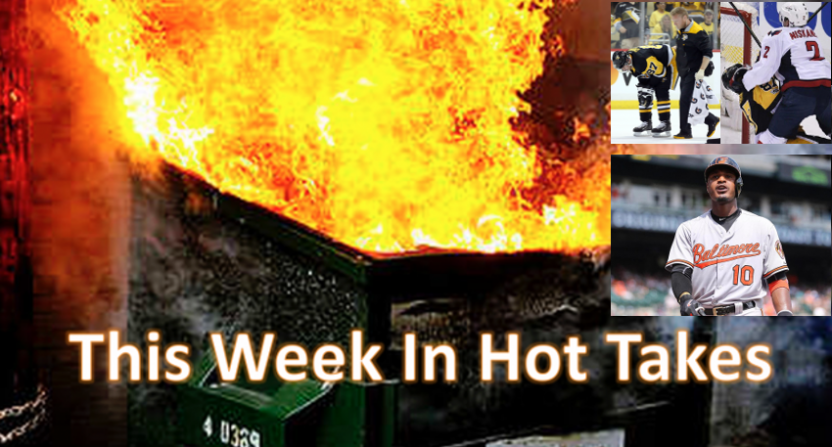 Welcome to another edition of This Week In Hot Takes. Here’s a look at the hottest sports media takes from April 28-May 4. Many of the usual suspects were pretty sedate this week, but there were plenty of takes out there to be found, especially on Sidney Crosby’s head injury and the racist abuse Adam Jones took. Let’s break them down.

5. Jason Smith thinks Wayne Gretzky didn’t get hit because he was “liked and respected,” Sidney Crosby got hit because he isn’t: This all started with a tweet from Smith Monday night:

Gretzky never would've gotten hit like Sidney Crosby, because Gretzky was liked & respected. Crosby isn't either of those.

Smith then expounded on this further on his Fox Sports Radio show Tuesday:

And here’s one of those compilations, featuring a Gretzky and Kevin Lowe-narrated intro, even:

Is the general point that Gretzky didn’t take as many hits as Crosby accurate? Probably, but that has more to do with both the era and the style of play than anything about if they were “liked” or “respected”. Gretzky’s preferred “office” was behind the net, while Crosby often drives to the front of the net (as he did on the play where he got hurt), and that’s an area where you’re going to take bigger hits. And yes, Gretzky had enforcers to back him up (not the first two Smith mentions, though; the idea of Jari Kurri or Peter Klima beating someone up is hilarious. Gretzky’s main enforcers were McSorley and Dave “Cementhead” Semenko, who once fought Muhammad Ali), because that was an era where you could do that; teams used their fourth lines less, there wasn’t as much of a premium on skating ability, and there wasn’t the instigator rule. But those factors don’t have a ton to do with if he was “liked” or “respected,” and their absence in Crosby’s case is about how things have changed; he can’t just camp out behind the net, and the Penguins can’t just ice a pure enforcer who can’t skate. People like to hit Crosby because they like to hit opponents, especially good opponents, and that was true with Gretzky as well.

4. Nick Kypreos argues for injuring opposing stars: Speaking of bad hockey takes, here’s another one from Rogers Sportsnet analyst Kypreos. On Tuesday night (one day after Crosby was injured), Kypreos was discussing the New York Rangers’ hits on Ottawa Senators’ defenseman Erik Karlsson, and he opted to argue that it’s always valuable to try and take out an opposing star:

"With the events of the past couple days, I think we're reminded of the importance of going after the other team's best player"-Nick Kypreos

"I think we're pretty much reminded the last 24 hours that when you get a chance to get a hit on your opponents top player you do that."

That's the exact quote, since I feel slightly bad about paraphrasing.

@Cane_Matt My jaw dropped when I heard this. It's not out of context, he was literally advocating trying to hit Karlsson to injure him like Sid.

Sadly, there doesn’t appear to be video of this, but there are tweets supporting that this was in fact Kypreos’ argument. As noted above, this is ironic considering Kypreos’ own career ended thanks to concussions. Advocating for injuring others doesn’t seem like the smartest move.

3. Albert Breer demands proof of racist insults tossed at Adam Jones: Breer, a reporter for SI’s The MMQB, went all in following the Jones incident to demand proof (despite Jones’ comments, comments from Red Sox players, apologies from the organization and from Boston’s mayor, and comments from other MLB players), and it wasn’t a good look:

Is it horrible to want some proof? I dunno. I've probably been to 200 games at Fenway in my life. Never heard a slur yelled at a player. https://t.co/Nq29ijPrzy

@bomani_jones Over what? Wanting proof? I've heard a lot of these accusations. Never seen one piece of evidence when I know people would DIE to have some.

@bomani_jones Not what I'm saying. It's just frustrating when there is no physical evidence of something that is supposedly a rampant problem. That's all.

h/t to @MikeLupica for doing actual reporting on this. Here's hoping they make the bleacher idiot's name public. https://t.co/vp79RSgdsD

@StaceGots It looks like you're a reporter. Would your time have been better spent finding out what actually happened than finger-wagging on Twitter?

@ToLey88 All I'm saying is if this is as rampant a prob at Fenway as Jones was saying it has been, you'd think there'd be cell phone video somewhere.

Breer has continued to double down since then, especially arguing with Dave Zirin about the numbers involved (Jones himself said the insults came from more than one fan):

@Travon My point: Not enough people wanted facts. Look at this: https://t.co/qVtqBHUN4I "Large group of fans". This Zirin guy actually wrote that!

@EdgeofSports Maybe worry about fact-checking what you write before going in on other people? "Large group" right? pic.twitter.com/CVy5rla9Bm

No one has claimed there was "large group". So either @EdgeofSports invented that and then put it in print, or he has breaking news. https://t.co/ypLAXq2zZ7

@AlbertBreer CBS Sports reported he was called "n—–" a "handful of times" by "fanS" Again, quite a stand you're making https://t.co/dthYAPVlbg

@EdgeofSports If you read that and think "large group" is an accurate way to sum it up, I can't help you. I was gonna leave it alone. But you came at me.

Would you like a burning bush as proof as well, Mr. Breer, or perhaps a dry fleece?

“You’re the master at getting the most out of your team in the regular season, which makes you the perfect coach for the Washington Capitals, because who knows getting the most out of the regular season better than the Washington Capitals? But playoff hockey, it’s a little bit different. And some of the things you’ve said are indicative of the things the Capitals have done in this series. And it’s not real intelligent hockey. It’s not hockey conducive to winning in the postseason.”

“And one of the things that you’re going to see as this postseason continues is the Penguins advance and the Capitals go home. And it’s all because Barry Trotz, maybe he’s a good coach, maybe he’s even a really good coach, but to be a really successful coach in the playoffs, you need to be great. And if you just listen to him talk, you’ll know Barry Trotz is incapable of that.”

Seeing a columnist go after a rival coach this way is something, but the even hotter take came in the column, which said that Washington’s Alex Ovechkin (who started the play with a hit on Crosby, but didn’t deliver the check in question and wasn’t penalized) should be suspended for the whole playoffs, and that the Capitals came up with a Shakespearean plan to take out Crosby during a closed-door meeting:

Makes you wonder what that closed-door meeting called by Capitals players was really about after their blowout defeat in Game 2, huh?

If they say it wasn’t about eliminating Crosby, the Capitals are liars. And if that sounds like an unfair accusation to make of the Capitals, then please consider my decade of experience covering a sport I love and a league I really, really, really want to give the benefit of the doubt.

(Or maybe consider their coach publicly saying hisplayers must go places they hadn’t gone before?)

Sorry, but I cannot give the Capitals, or the NHL, any benefit. And I doubt very much there wasn’t an intent to injure Crosby when this series shifted to Pittsburgh.

What if Breer demanded proof from this guy instead?

1. Terry Cushman compares Adam Jones incident to protests against police brutality in Baltimore, gets called out by David Simon: I debated whether or not to include this one, as we don’t usually cover lower-profile bloggers here (and we don’t count ex-sports media people, which is why Curt Schilling’s deluded take on Jones isn’t present), but the fires of Cushman’s take were too good to ignore. Cushman, who writes for the avidboston.com blog and frequently tweets in ALLCAPS, made one of the biggest stretches you’ll ever see in the wake of the Jones incident, saying that Baltimore couldn’t complain because of violence that happened during protests against police brutality in that city:

Hypocrisy: In 2016 the ORIOLES had to play in an empty stadium because their citizens were throwing much more dangerous things than peanuts

He then got called out by David Simon, creator and executive producer of The Wire and a famous Orioles fan:

When an apples-to-orange reach-around is rushed forward as a means of flippantly excusing shitbag, racist behavior. #StayClassyBoston https://t.co/sQ36HLxZfu

@AoDespair I was referring the People of Baltimore resorting to violence (aka brutality) during protests, which ironically was to end police brutality.

Know exactly your reference, asshole. "But this also happened" to excuse behavior is the most dishonest rhetoric on internet. Go fuck off. https://t.co/4VemYiyrht

@AoDespair Its not fair to take an isolated incident and use it to generlize an entire city is the point i was making. I'm sorry you can't handle that.

@cushmanMLB Why don't conjure some of the same dignity and responsibility as the Red Sox org & its better fans, and say, "That shouldn't have happened."

@AoDespair I've never denied either. There's no room for racism or violence. I just think the ORIOLES fan base are hypocritical.

@cushmanMLB Fucknuts, bringing up the Freddy Gray aftermath as a reply to the incident at Fenway is argumentum non sequitur and an attempt to shifrt…

@AoDespair You should clean up your language. Ladies might be viewing that.

An apples-to-oranges reacharound argumentum non sequitur indeed, and one worthy of the top spot here. Oh, and see also Cushman’s other dignified response: