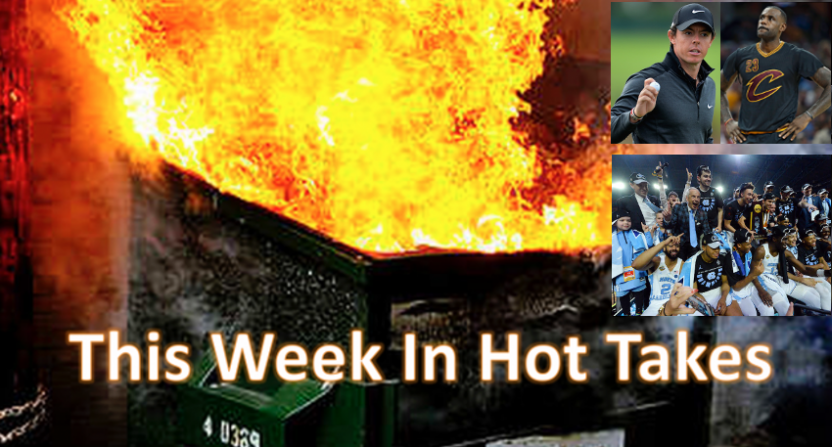 Welcome to another edition of This Week In Hot Takes. Here’s a look at the hottest sports media takes from April 21-27.

5. Skip Bayless thinks “Rajon Rondo’s Bulls would have eliminated the Cavs in the first round”: Bayless’ bashing of LeBron James isn’t new, but this rant about the Cleveland Cavaliers’ supposed flaws Monday (following their sweep of the Indiana Pacers) is impressive even by his standards. Bayless talks about how lucky the 51-31 Cavs were to avoid the Miami Heat (41-41) and the Chicago Bulls (also 41-41), and then goes on to rant about how bad Paul George and the 42-40 Pacers were:

Saying that the Pacers didn’t wind up posting much of a test for the Cavs is fair (although all four games were decided by six points or less), but concluding that the Bulls (currently down 3-2 to the Boston Celtics) or the Heat (who missed the playoffs entirely) “would have eliminated the Cavs” feels extremely foolish and hot-takey. Of course, those are both attributes regularly applied to Bayless.

4. Caron Butler argues that LeBron would make UNC a NBA playoff contender: From unrealistic bashing of James to unrealistic praise of him, just one day later on the same network? Truly, FS1 can supply all the hot takes we need. Butler, who played in the NBA from 2002 through the start of the 2016 season, isn’t a full-time media figure yet, so we normally wouldn’t include him here, but he appeared on Colin Cowherd’s The Herd Tuesday and definitely seemed to show off his hot-take potential, so he may wind up with a regular forum for those takes sooner rather than later. Here’s the hottest one of all; an argument that putting James on the NCAA champion North Carolina Tar Heels would make them a NBA playoff team.

Put LeBron on the National Champion UNC Tar Heels and they'd be an NBA playoff contender according to Caron Butler (@realtuffjuice) pic.twitter.com/rGcYili4Ui

“Put LeBron on any team that didn’t make the playoffs, and they’ll make the playoffs.” That’s a little far-fetched in its own right. Would James alone really elevate the 20-62 Brooklyn Nets to the postseason? Cowherd says that the Nets lose by 7 points on average and James is worth 16 points per 100 possessions, but that isn’t quite a full case for how this would work; the more accurate stat would be how many points per 100 James is better by than whoever he’s taking playing time from. Still, it’s possible to at least consider that one, but Butler then goes much further by suggesting that even the top NCAA team could be in the top half of the NBA just by adding LeBron.

When even Cowherd is questioning if your opinion fits in the category of hot takes, that’s a warning sign. Consider that this North Carolina team has one likely lottery pick (Justin Jackson), a few draft-eligible seniors who might or might not get NBA attention (Kennedy Meeks, Isaiah Hicks and Nate Britt), and three further underclassmen exploring the draft process (Joel Berry II, Theo Pinson and Tony Bradley; Berry has since withdrawn his name from the draft and will return to school for his senior year).

So, you have one for-sure solid NBA pick there, and then a whole lot of guys who may or may not wind up in that league for the long run. That’s a roster nowhere near comparable to even the Nets, and that’s before you take in the age discrepancy; adjusting to the NBA is tough, and a team of college-age players would likely have a difficult go of it even with LeBron. Playoffs? Don’t talk about playoffs! I just hope they can win a game!

3. Jeff Pearlman says ESPN’s decision to keep Stephen A. Smith instead of some of the
journalists who were cut is “an assault on the profession”: Smith is usually the one dropping the hot takes, but this time around, one of the most fiery takes was about him. Here’s what sports author and former Sports Illustrated writer Jeff Pearlman had to say Wednesday around the ESPN layoffs:

This led to Smith defending his credentials and his prominence on his radio show Thursday, and he made some valid points. The reporter to columnist to TV pundit transition certainly isn’t unprecedented, and while Smith offers many terrible opinions on First Take, his resume doesn’t say he shouldn’t be a pundit. Beyond that, too, while many hate both him and First Take, Smith provides exactly what other viewers want (and a lot of the critics aren’t watching ESPN at that hour regardless of what they air). If Smith was not providing value for ESPN, he would not be paid what he is.

And Pearlman really goes on to admit that, writing that “This isn’t actually about Stephen A. Smith, it’s about the decline of good journalism, and sadly, the decline in the demand for good journalism.” Well, yes. There’s no dispute that many of those cut by ESPN are excellent journalists, and it’s highly unfortunate that ESPN isn’t going to keep employing them.

But journalism is also a business, and has largely always been so. At non-subsidized organizations, journalistic work needs to bring in enough revenue (through subscribers, advertisers, etc) to support the costs of producing it. ESPN decided that they could more easily afford to cut these journalists than someone like Smith, and there’s some logic to that.

Even without Smith, ESPN would need to fill that TV programming slot in some way, and for all his detractors and all the criticism of his takes, Smith tends to draw decent ratings. That doesn’t make ESPN right in making the cuts they did, but “why cut this person and not that person?” is generally a foolish argument from the outside, as there are plenty of factors involved we’re not privy to (including contract price, contract length, exit clauses, the cost of and plan for replacement coverage).

Does it hurt ESPN’s journalistic reputation to cut some top journalists and keep Smith? Maybe. But Pearlman’s closing “this is an assault on the profession” feels ridiculous. Even after these cuts, ESPN still employs more reporters than just about anyone else out there. And there’s still obviously going to be a place for journalism at the company, on TV, on radio and on the web. But it’s worth remembering that ESPN is not exclusively about hard-hitting journalism; this is the Entertainment and Sports Programming Network, after all.

Some of that “entertainment” in its current form includes debate shows like Smith’s First Take. We can argue about their value or lack thereof forever, but as long as they’re profitable, they’re here to stay. Pearlman is making an apples-and-oranges argument here by saying ESPN keeping Smith and not these journalists is “an assault on the profession,” and it’s one that feels like a hotter take than anything Stephen A. said this week.

2. Michael O’Doherty thinks Rory McIlroy “blew it” by not letting the press attend or take photos of his wedding: Pieces from media aggrieved they weren’t invited to something are always fun, and this delightful one from O’Doherty in Ireland’s The Independent certainly qualifies. Headlined “Rory’s wedding shows that for some stars, publicity is a one-way street,” it’s an entire column complaining about how McIlroy didn’t let media attend or photograph the wedding and didn’t release photos to them. “It’s obsessive secrecy such as this that makes you wonder if Rory, by all accounts a sensible and polite person, has disappeared up his own backside when it comes to his biggest day.” Nah, I’m pretty sure it’s the columnist complaining about a lack of wedding photos who’s disappeared up his own backside.

ESPN.com has raced from a one-seed to a 16-seed in its digital coverage of the sport.

As a headline writer from the New York Daily News would write it:

Excuse me if I need a moment to digest this. ESPN, the television network, was built on college basketball.

…ESPN.com was a natural spinoff. It became the place to go for most of the top national insight and information into college hoops. Typically, when it was time for a prime event like the Champions Classic, the ACC/Big Ten Challenge or Duke-North Carolina, ESPN.com set up, covered and then analyzed the games. It’s the place where the best writers in the game wanted to work.

ESPN.com, the website, announced it has as much interest in backgammon and marbles as it does in the game that made sports fans pay serious attention to the network more than three decades ago.

The announcement came in the jarring news that among the 100 or so employees ESPN laid off this week were Dana O’Neil, Andy Katz, C.L. Brown, Eamonn Brennan and Len Elmore. (Yes, I know them all and consider them friends.)

Consider that confirmation college basketball matters less to the four-letter network than blocking and tackling dummies. Consider this my letter of concern that ESPN.com is prepared to abandon serious journalism for former coaches and players back-scratching current coaches and players. (At least more of it.)

It’s understandable that Bozich is annoyed about his friends getting laid off, but viewing this exclusively through the prism of college basketball is even more #pleaselikemysport than hockey often gets (and that sport got hit perhaps even harder). There were cuts across all sorts of sports, and prominent cuts; for example, ESPN’s NFL coverage lost Ed Werder (and several others), while their NCAA football coverage lost Brett McMurphy. Both of those sports have bigger TV deals and bring in more revenue than college basketball does for ESPN, but they still lost key figures. Bozich’s argument that ESPN should pour resources into covering college basketball because of its role in the network’s history is also flawed; last time we checked, history alone doesn’t pay the bills.

Was ESPN wrong to cut some of those talented journalists? Perhaps. But as with Pearlman’s piece earlier, it’s exceptionally difficult to make calls on who they should or shouldn’t have cut from the outside given all the private factors involved. And Bozich even goes on to discuss how this is a football world. But his take that ESPN is telling college basketball to “drop dead” is still over the top. Yes, ESPN cut a lot of top college basketball talent. But they still have plenty, and they’ll still be broadcasting a lot of college games. Maybe they made the wrong moves with these cuts, maybe they didn’t, but an argument from outside that they should employ a lot of people to cover a sport based not on revenue models but rather ESPN’s history feels like something better suited for This Week In Hot Takes than a legitimate case.

Honorable mentions: Colin Cowherd on Texas A&M, Stephen A. Smith on the Thunder, Phil Mushnick on running to first (again).