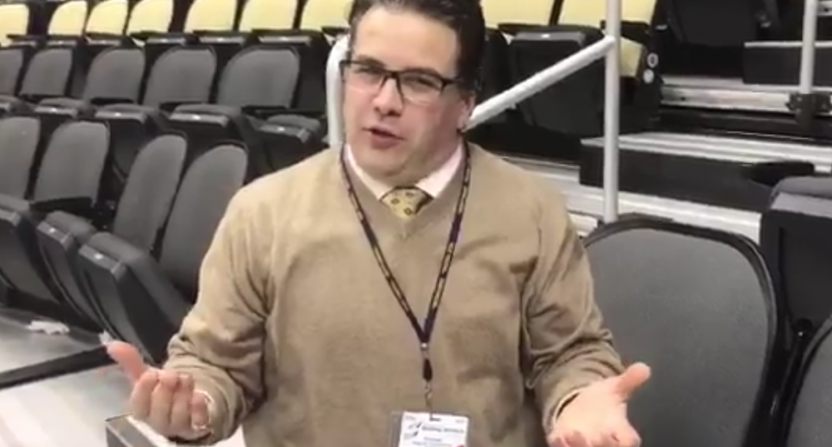 Tensions got high in the Washington Capitals-Pittsburgh Penguins NHL playoff series Monday night following Capitals’ defenseman Matt Niskanen’s cross-check on Penguins’ center Sidney Crosby (which followed a Alex Ovechkin high stick on Crosby) and a Pittsburgh media figure did his best to inflame them further after Washington’s 3-2 overtime win. The figure in question is Rob Rossi, who managed to combine a terse exchange with a coach with a WWE-style promo and a conspiracy theory hot take of a column all in one night. Here’s a video summarizing what he did:

Rossi was at the Pittsburgh Tribune-Review from 2002 through September 2016 (his LinkedIn says he’s still there, but this Sept. 2016 tweet appears to show him moving on, and his old Tribune archive appears dead), before taking a new job as “special projects manager” at 535 Media LLC, a Pittsburgh digital media agency. Part of that new role apparently means being the sports editor at upgruv (What’s upgruv? Well, apart from a punchline, it describes itself as “A personalized content service aimed at busy professionals that offers a mix of trending news from western Pennsylvania and beyond.”)

Rossi’s still a credentialed Penguins’ media member, and he’s made news around these parts before for questionable reporting of a diatribe directed at him by the Penguins’ GM; he’s also been regularly mocked by Pittsburgh fans, media critics and others for a variety of missteps. On Monday, he started things off with a testy exchange with Capitals’ coach Barry Trotz (2:00 here):

#Caps head coach Barry Trotz talks to the media after a 3-2 OT/win in Game 3 against the Pittsburgh Penguins. #CapsPens #RockTheRed pic.twitter.com/VtJWv0Ttoi

“Barry, is the play by Alex, that led to Sid sort of staggering into Niskanen where he appeared to get the stick up towards the face, is that a hockey play?” Rossi asked.

“Was there a penalty?” Trotz said confused. “I don’t understand.”

“No, I’m not going to defend anything,” Trotz said. “Is Kunitz’s predatory hit on Oshie okay?”

“Or the one on Backstrom, is that okay?” Trotz continued.

“I’m not going to debate on all that stuff,” Trotz said. “So that’s a terrible question.”

“Next,” Trotz said with sass. “You got your answer.”

If it had been just that exchange, this wouldn’t be so far from the norm. Reporters/columnists and coaches see things differently all the time, especially when the media member’s representing the rival city. But Rossi then went on to, as Oland described it, cut a promo on Trotz:

Hey @Real_RobRossi how do you feel about Barry Trotz? pic.twitter.com/ZSDY8Fwb2a

“Nothing personal, Barry, I actually kind of like you, but you say a lot of stupid things, and you don’t win a lot of playoff games, and your team is still trailing this playoff series. Which, by the way, marks the second year in a row that you had the NHL’s best regular-season team and are trailing the Pittsburgh Penguins in a playoff series. And I’m starting to think there’s a reason for all these, well, let’s call them playoff failures, in your career.”

“You’re the master at getting the most out of your team in the regular season, which makes you the perfect coach for the Washington Capitals, because who knows getting the most out of the regular season better than the Washington Capitals? But playoff hockey, it’s a little bit different. And some of the things you’ve said are indicative of the things the Capitals have done in this series. And it’s not real intelligent hockey. It’s not hockey conducive to winning in the postseason.”

“And one of the things that you’re going to see as this postseason continues is the Penguins advance and the Capitals go home. And it’s all because Barry Trotz, maybe he’s a good coach, maybe he’s even a really good coach, but to be a really successful coach in the playoffs, you need to be great. And if you just listen to him talk, you’ll know Barry Trotz is incapable of that.”

When did credentialed media members become WWE heels? It’s not even the old standby about no cheering in the press box; this would be covered under a much looser rule, like “no actively trolling the other team just outside of the press box.” And, amazingly, this still wasn’t the most bizarre thing Rossi did Monday. That would be the column he penned saying that Ovechkin (who didn’t deliver the cross-check and wasn’t called for a penalty), not Niskanen, should be suspended for the rest of the playoffs.

Even better, that column argued Niskanen deliberately set out to take out Crosby as part of a Shakespearean plot from the Capitals’ players-only meeting after Saturday’s Game 2. The whole column’s full of gold (Crosby is “the only hockey player most Americans know” and “For Player Safety not to look at Niskanen’s history against Crosby would be the height of credulity,”) but it gets really good when it gets to that plot:

Makes you wonder what that closed-door meeting called by Capitals players was really about after their blowout defeat in Game 2, huh?

If they say it wasn’t about eliminating Crosby, the Capitals are liars. And if that sounds like an unfair accusation to make of the Capitals, then please consider my decade of experience covering a sport I love and a league I really, really, really want to give the benefit of the doubt.

(Or maybe consider their coach publicly saying hisplayers must go places they hadn’t gone before?)

Sorry, but I cannot give the Capitals, or the NHL, any benefit. And I doubt very much there wasn’t an intent to injure Crosby when this series shifted to Pittsburgh.

Maybe throw in a few more reallys there, Rob. Or a firsthand report of the burning fires and bubbling cauldrons in the Capitals’ closed-door meeting. Or a reference to something being rotten in the state of Denmark. (Surely Lars Eller doesn’t smell that bad?)

In any case, this is a delightfully deluded column in its own right, but when you add in Rossi’s behavior at the press conference and his post-presser wrestling promo, it goes to a whole new level, and delivers something we’ve rarely seen from anyone in the media. It’s not a Penguins-Capitals’ series any more; it’s Rob Rossi against Washington, and however will their hockey ability stand up to his poison pen? After all, it’s not like pens have ever been stopped by Caps.