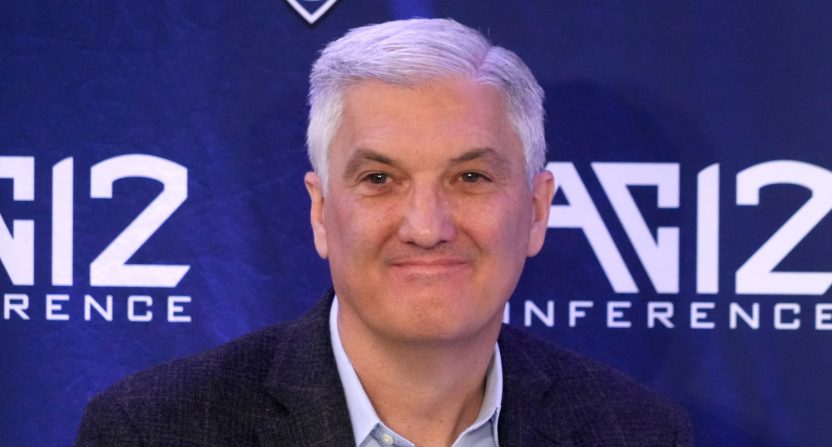 College conference commissioners have obvious reasons to talk up their conferences. Those incentives go further still when it comes to the Pac-12 and the Big 12, which have been reportedly trying to raid each other and also posturing to fend off further incursions from the Big Ten and the SEC. And the relatively-new hires at the tops of those conferences, George Kliavkoff (hired in May 2021) and Brett Yormark (hired in June 2022) respectively, have been talking much more smack about other conferences than we’ve usually seen from commissioners.

The way Yormark and Kliavkoff have publicly gone on the attack against each other’s conferences and against other conferences in general has been highly unusual. It may be from the situation, from their backgrounds outside of college sports, or a mixture of both. But what’s really interesting is when that smack turns into something that no other piece of publicly-available data or analysis seems to support. And that’s the case with what Kliavkoff said about his conference’s media rights at the Pac-12 basketball media day Wednesday (he’s seen above speaking there). Here’s more on that from Ben Bolch of The Los Angeles Times:

Kliavkoff said the conference’s new deal would “close the gap between us and the Big Ten and the SEC [Southeastern Conference],” which he called a first step in strengthening the Pac-12 brand.

The SEC’s most recent per-school payout was $54.6 million. The Big Ten’s per-school payouts have varied, from around $54.3 million in 2021 to between $43 and 49 million last year, but are estimated at around $50 million on average under the current media deals. Both of those numbers are expected to rise significantly in the near future with those conferences’ new media deals, further boosting those conferences as a “Power Two” pulling away from the rest of the Power Five.

Meanwhile, the Pac-12 paid out only $19.8 million per school in the most recent fiscal year, citing pandemic impacts. They did pay around around $34 million the previous fiscal year. Of course, per-school payout numbers can change year by year thanks to revenue from the College Football Playoff, the NCAA men’s basketball tournament, and other championships (where the distribution varies depending on which conferences put teams into those championships).

But, as Bolch’s article notes, USC and UCLA are widely projected to make $65 to $70 million per year in the first year of conference distributions once they join the Big Ten in 2024 (which is also when the conference’s new media deals kick in). That figure is expected to rise further over time, as those media deals are backloaded. So the Pac-12 would have to double their last non-pandemic year payout to schools in order to “catch” the Big Ten’s projected 2024 numbers, and they’d have to go further still to catch the Big Ten’s numbers after that.

SEC schools are also going to be making much more by then. This March (after the SEC’s new deals, ahead of UCLA and USC going to the Big Ten and ahead of the Big Ten’s new deals), research firm Navigate issued thorough  projections estimating that the SEC would hit $96.4 million in per-school distribution by 2026 and $105.3 million by 2029. Those projections also had the Big Ten hitting $86.5 million and $94.5 million respectively by those years.

The Big Ten wound up getting more than many expected from this new round of media deals, helped by the new additions and by signing with three partners (but with a loss of ESPN exposure), so they’re likely to pay even more than those estimates reflected. But the SEC numbers should still be about right. Meanwhile, Navigate projected $51.7 and $56.5 million per-school for the Pac-12 in those years respectively, and that was before they lost USC and UCLA.

So there was no obvious way for the Pac-12 to “catch” the SEC and Big Ten even before the Pac-12 lost two big schools. Yes, it’s theoretically possible under a new media deal that decided the Pac-12 rights were suddenly better than the conferences they’d previously trailed, but there didn’t seem to be much of a path to that. And even if the conference went with a deal that paid more with the tradeoff of less exposure, like a streaming-only deal, it’s still hard to envision the numbers coming in there getting anywhere close to the ones already locked in for the Big Ten and SEC. Bolch’s article cites projections of $35 to 40 million per school for the Pac-12 under a new media deal, which would be a rise from what they had (and impressive, considering the schools they lost), but is still nowhere close to what the Power Two is expected to distribute.

The current reality of the Power Five college conferences is that the Big Ten and SEC are well ahead of the Pac-12, Big 12, and ACC, and that that gap looks to grow further still. The Power Two are certain to stay well ahead the ACC (barring major realignment that somehow boosts the latter), as that conference’s media deals are locked in through 2036. It is theoretically possible that the Big 12 and Pac-12 could get closer to the Power Two, as their media deals are not yet done. But that seems highly unlikely given that many of their biggest draws (Texas, Oklahoma, USC, and UCLA) have left for the Power Two, and given what has been paid for the remaining schools historically.

So conference commissioners in those other three conferences have two options. First, they could talk about where their conferences really are, and do their best to position their conference as the best option of the remaining three. Second, they can present bold claims about catching the Power Two. Those claims cannot yet be completely refuted thanks to the new media deals not being done, but they don’t align with the visible evidence. Kliavkoff is choosing the latter approach, and it will be interesting to see how it works out for him. At the moment, his comments certainly feel reminiscent of the Whose Line Is It Anyways? opening.

One notable remaining part of this is that the Pac-12 seems to hold out some hope that the University of California’s board of regents will compel UCLA to stay. In support of that, the conference sent a letter to that board saying that UCLA will lose money on the move. Kliavkoff backed that further at this media day, but did not cite sources:

“We believe between the travel and the coaches’ salaries and some of the other expenses you incur when you join the Big Ten,” Kliavkoff said, “the small delta in the media rights deal [between the Pac-12 and the Big Ten] will be more than offset. We stand by those numbers.”

There is absolutely not currently a “small delta” between these conferences. There is a large delta, and at the moment, it looks set to get larger. If the regents do somehow step in to block this move (clarity on if they will try is expected from their meeting next month), the gap may not grow as much as currently projected, but it’s still going to grow. Under any set of currently-public data, UCLA looks set to profit from the Big Ten move. So it would be real interesting to see “those numbers” that the conference is standing by.

Adding it all up, there are three apparent pathways for the Pac-12 to “catch those guys.” One is that the Pac-12’s upcoming media deal, with two fewer prominent schools than their last one, not only grows, but somehow grows to Big Ten/SEC levels. (Or, if not immediately, it grows to those levels off escalator clauses post the expansion Kliavkoff is citing, or it’s an extremely short-term deal and the next one somehow grows to those levels.) Another is that the SEC and the Big Ten somehow implode, with schools leaving their locked-in and lucrative deals there for other conferences with lesser deals. A third is the heat death of the universe, at which point the Big Ten, SEC, and Pac-12 will all have equivalent media rights payouts of $0. Readers can decide if any of those pathways are at all likely, or if this is more hot air from Kliavkoff.