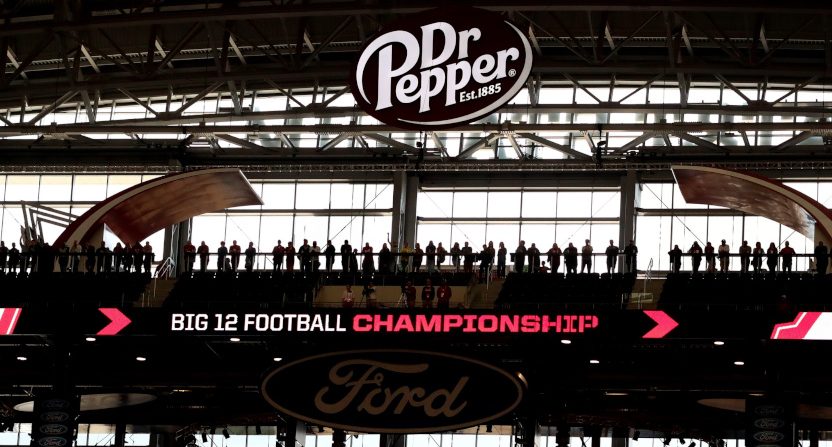 After the Big Ten, PAC-12, ACC, and SEC announced scheduling plans for this year, with the Big Ten, Pac-12 and SEC opting for a conference-only model and the ACC going conference-plus-one, eyes turned to the Big 12. The last Power Five conference to announce its 2020 schedule had its plans revealed Monday, via Max Olson and Nicole Auerbach of The Athletic. Here’s more from that piece:

The Big 12’s Board of Directors met Monday night and approved a plan to play nine conference games plus one nonconference home game, three people with direct knowledge of the plan told The Athletic.

…“The more flexibility you have, the better off you are in terms of being able to make up games,” Big 12 commissioner Bob Bowlsby told The Athletic on Friday night. “I go into it with the assumption that we’re going to have some disruptions. And we’ll have some schedules we have to rearrange and that there’ll be some games to make up. If that’s the case, the more time you have, the better you can deal with those things.”

The Big 12 is expected to be flexible in its approach to its December conference title game, which Bowlsby previously discussed with The Athletic. That game is currently scheduled for Dec. 5 at AT&T Stadium in Arlington, Texas, and could be rescheduled for Dec. 12 if necessary.

That piece also notes that the championship game could be further pushed to Dec. 19. And if the regular site of AT&T Stadium (seen above during last year’s game, which took place on Dec. 7, 2019) isn’t available on that day (currently, the UIL Texas 1A-4A high school football championships are scheduled there for Dec. 16-19), it could be moved to the Texas Rangers’ new Globe Life Ballpark stadium across the street.

But the more interesting discussion still may be about what’s ahead with Week Zero. The conference currently has four teams set for Aug. 29 season openers, including two recently-announced ones new to that date (Oklahoma hosting Missouri State and Kansas hosting Southern Illinois). That would be several weeks ahead of when every other Power Five conference is set to begin play. Currently, the next-earliest P5 date comes from the ACC and its Week 1 games on Sept. 6, although the Big Ten hasn’t yet announced their schedule (the Pac-12 has said they’ll begin Sept. 19, and the SEC has said they’ll start Sept. 26). And while the Week Zero games are out of conference, they aren’t automatically cancelled thanks to the Big 12’s 9+1 model (and with three of the other five Power 5 conferences nixing out-of-conference play altogether, that means there’s more chance of a Week Zero +1 game against a less-prominent team being what survives).

Of course, this is all quite preliminary. There may not be a fall college football season at all; leagues like the FCS Ivy League have already shifted their season to the spring, while others like the CAA have already cancelled their fall plans. And while the Power Five schools are moving ahead for now, that could change, especially if the NCAA as a whole opts to cancel fall championships (which wouldn’t necessarily cancel football, but would make it harder for it to proceed as the only remaining sport). But it’s certainly notable to have the Big 12 decided on what they’re planning to do. We’ll see what that means in the long run.