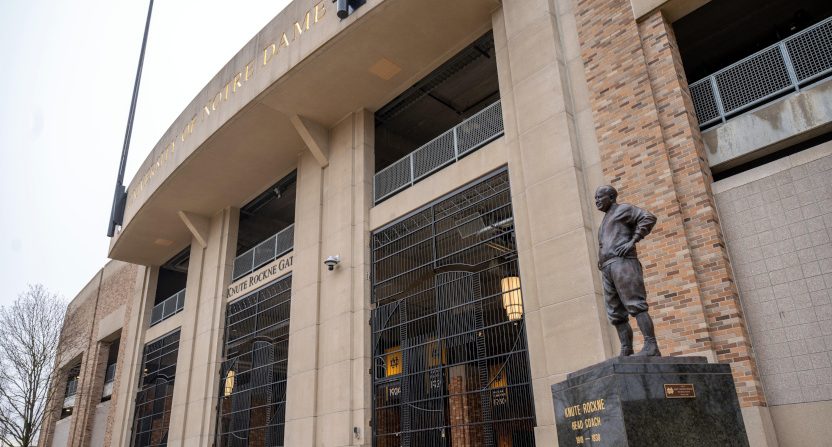 One of the most interesting elements out of the ACC’s schedule model announcement Wednesday was how Notre Dame will be officially included in the conference for football (they’re an ACC member in most sports, but independent in football and hockey) this year. That means they’ll be eligible to participate in the conference championship game. And as per Ralph D. Russo of The Associated Press, that move will also come with Notre Dame (their football stadium is seen above in March) receiving a full share of conference money (they’d previously been excluded from ACC football money), and also putting their own TV deal with NBC into the conference pot. Here’s more from Russo’s piece on that front, and on how this is most likely a one-year arrangement:

Notre Dame already had a scheduling agreement with the ACC that puts five or six games with the league on the Fighting Irish schedule every year. They had six this season: Clemson, Duke, Wake Forest, Georgia Tech, Louisville and Pitt. Added to that will be home games against Florida State and Syracuse and road games against North Carolina and Boston College. There will be no renewal of the Notre Dame-Miami rivalry.

The ACC and Notre Dame also agreed to equally share TV revenue — including the Fighting Irish’s deal with NBC — among the 15 schools.

It is a one-year deal for the Fighting Irish and [Miami AD Blake] James said he didn’t expect it to go beyond that.

“I don’t know (if) this could lead to Notre Dame being a full member in football,” James said on a conference call with reporters. “Would I like to see Notre Dame as a member of the ACC on a full-time basis? Yeah, I think that’d be great. They’re a great football program. A great institution that fits well with the ACC, but recognize they need to do what’s best for Notre Dame. This year what was best is for them to join the ACC and we’re glad to have them as part of the league.”

And Notre Dame may wind up being very glad to be part of the league. First, there were obviously big challenges for their schedule from conferences like the Big Ten and Pac-12 going to conference-only play. That led to them losing games against USC, Stanford, and Wisconsin. The shift to this ACC model means that they won’t be playing Arkansas or Western Michigan either, but they will now have new road games against Boston College and UNC and new home games against Syracuse and Florida State.

Whether the Irish can still play Navy is to be determined. The ACC’s current rule is for a maximum of one non-conference game per school, with that game to be held in the same state as the ACC school. Under that rule, Notre Dame could conceivably host Navy, but they couldn’t play at Annapolis, where they were set to play after the cancellation of that game’s initial location in Ireland. So we’ll see what happens there. (Of course, we’ll see what happens with all of this; there are still big questions about if college football will actually happen this fall. But for the moment, it’s worth examining the implications of the moves announced at this point.)

It’s also notable that beyond stabilizing Notre Dame’s 2020 football schedule in a conference-focused world where they could have been left out entirely (the most important part of this picture), this move also could lead to a financial gain for the Irish. A full share of ACC TV revenue looks better for them than their own deal with NBC. As per a piece from David M. Hale and Dave Wilson of ESPN earlier this month, the 2018-19 financial year saw the ACC pay out at at least $27 million per institution in normal per-school distributions, with an average of around $29 million per school. Meanwhile, Notre Dame received around $7 million from the ACC for their non-football membership in the league, and their football deal with NBC (which runs through 2025) is reportedly worth around $15 million per year, and they get another $3.19 million from the College Football Playoff each year (regardless of if they’re selected; they were not in 2019-20, but were in 2018-19). So that suggests they received about $25.2 million in total last year (plus whatever they got from the Big Ten as an associate member there for hockey).

So it looks like being a full ACC member would have been worth at least $2 million annually to the Irish last year, and probably more likely around $4 million (putting them to that $29 million average). And that’s before you add their own NBC and CFP money into the general ACC pot. Obviously, the figures are going to be much different this year thanks to the pandemic (and its cancellation of the 2020 NCAA basketball tournament and spring seasons and championships, and its still-to-come effects on football and other fall sports). But it still seems pretty likely this revenue-sharing arrangement will work out in Notre Dame’s favor financially, even if the exact numbers aren’t known yet.

Of course, that doesn’t mean “Notre Dame is guaranteed to join the ACC permanently in football!” This year’s circumstances are extremely unique, and a firmer conference affiliation makes sense for the Irish in a world where so many conferences are going conference-only (or, in the case of the ACC, “conference-only plus one under a strict set of circumstances”). And that’s the bigger deal here than the financial side. And while Notre Dame might gain more financially from being a conference member than being independent at the moment, that isn’t necessarily the case for all time; the big question there will be about what the TV offers look like for the Irish as their current NBC contract gets closer to its expiry. But the financial side of this is interesting, and it’s further incentive still for Notre Dame to make this move this year.