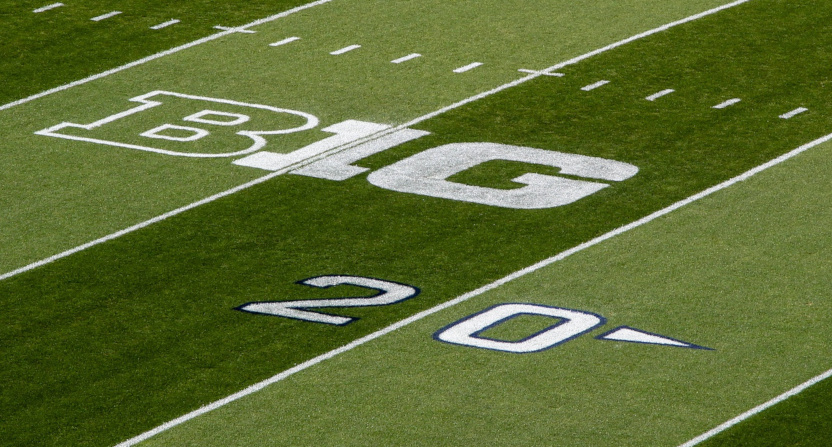 Thursday saw a big (or B1G) domino fall in the discussion about what college football will look like this fall. A day after the Ivy League announced they won’t play sports this fall, Nicole Auerbach of The Athletic broke the news that the Big Ten won’t play out-of-conference football games this year:

The Big Ten is expected to announce today that it will go with a conference-only football schedule for this fall, a person with direct knowledge situation tells @TheAthleticCFB.

The Big Ten later officially announced this, and for all fall sports, not just football. And their statement includes the notable caveat that even a conference-only fall season is not guaranteed. The key part there is “the Big Ten Conference announced today that if the Conference is able to participate in fall sports (men’s and women’s cross country, field hockey, football, men’s and women’s soccer, and women’s volleyball) based on medical advice, it will move to Conference-only schedules in those sports. Details for these sports will be released at a later date, while decisions on sports not listed above will continue to be evaluated.”

But if there is a Big Ten football season, but one without out-of-conference games, that’s pretty notable. That would impact a lot of big games, including Ohio State-Oregon, Michigan-Washington, Notre Dame-Wisconsin, and Penn State-Virginia Tech. And it also impacts a lot of games for teams from smaller conferences, perhaps especially the Mid-American Conference. (A photo of the 20-yard line ahead of a 2019 Buffalo-Penn State game is used at the top of this post.) Here’s a conference breakdown from @RedditCFB:

Here’s a list of all the affected games, using FBSchedules.com’s week-by-week CFB schedule for the Big Ten:

These are also notable losses for the smaller-conference or independent teams. The smaller-conference teams in particular usually get a fair amount of money to play road games against Power 5 opponents. And so that loss can have a significant impact on their athletic department budgets. Here’s an illustration of that for one MAC team, Bowling Green:

BGSU Football is scheduled to play at Ohio State and Illinois. BGSU would lose out on $2.2 million if the Big Ten doesn't have conference games. That is absolutely crippling to a department that already has an extremely limited budget. This is legitimately devastating.

And it’s probably not just the Big Ten. There’s already talk that the Pac-12 and the ACC may follow suit, which makes sense; if they didn’t, the teams that had set up plans to play Big Ten teams would be in a tough spot. But it’s still notable to see that:

Multiple industry insiders tell @TheAthletic that they expect the Pac-12 to go to conference-only scheduling as well in the coming days: https://t.co/KVWGAZTCrc

#ACC commissioner John Swofford has said that if league adopts an all-conference football schedule for 2020, Notre Dame likely will be in mix. Irish already have six ACC opponents on docket.

So it seems pretty likely at this point that if there is college football this fall (which in itself remains a giant if), it will be on shorter, conference-only schedules. And that could lead to some dramatic changes for networks, teams, and the sport as a whole, both for this year and for future scheduling. Will these out-of-conference games get made up? Will they be pushed to 2021 and bump those games and everything after them back a year? Or will they just be written off?

But beyond that, it’s worth noting that there are absolutely zero guarantees that any sort of college football will happen this fall, even in conference-only games. For example, Ohio State shut down all the voluntary workouts on its campus Wednesday in multiple sports, including football, following COVID-19 testing results. (They didn’t release details on those results.) And Ohio State athletic director Gene Smith didn’t sound too optimistic Thursday:

On a teleconference with reporters, Ohio State athletic director Gene Smith said he is no longer "cautiously optimistic" about a football season being held this fall. "I'm very concerned."

We’ll see where things go in the coming days. But for now, the Big 10 out-of-conference schedule is gone.