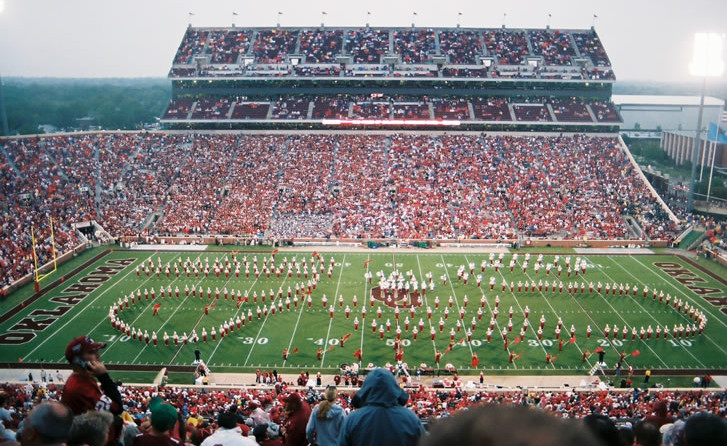 The Big Ten and Pac-12 have canceled their out-of-conference games in football (and other fall sports) this fall as a way to have all games played under their own COVID-19 protocols, and the ACC looks to be heading towards a mostly-conference schedule (with perhaps an exception for SEC teams and a separate exception for Notre Dame). The Pac-12 also is moving towards a later-starting schedule, and other conferences may follow. But the SEC and Big 12 still seem to be looking towards including out-of-conference play, and two Big 12 schools announced Saturday that they’re planning Week Zero (Aug. 29) openers against FCS schools. The Kansas Jayhawks announced that they’ll host a new game on that date against the Southern Illinois Salukis, while the Oklahoma Sooners announced that they’re moving up their home game against the Missouri State Bears by a week.

The Southern Illinois-Kansas game is a new game for both schools, replacing the Jayhawks’ cancelled game against the New Hampshire Wildcats (which was initially set for Sept. 5, but the CAA cancelled its entire football season two weeks ago) and the Salukis’ cancelled game against Wisconsin (part of that Big Ten shutdown). The Bears-Sooners game is an existing game that was set for Week 1, Saturday, September 5; Oklahoma petitioned the NCAA for a waiver to move that up. A waiver is required to play a game in Week Zero, and historically, those waivers have often been for games in Hawaii or elsewhere overseas, or schools that will play at Hawaii later in the season. But there have been more and more other Week Zero games in recent years, including the ratings juggernaut of Miami-Florida last year.

Missouri State-Oklahoma and Southern Illinois-Kansas likely won’t draw Miami-Florida ratings, especially as it’s not even clear where those games will air; the Oklahoma game was initially listed as ESPN3 (digital-only) when it was in Week 1, and it’s not clear where Kansas’ game against New Hampshire was supposed to air. (Both ESPN and Fox have some Big 12 rights, so even the media outlet set for a particular game isn’t always a sure thing.) But those games could have a lot more appeal to networks now, especially as there aren’t many Week Zero games left.

As per FBSchedules.com, the only other games currently scheduled for Week Zero are Idaho State at New Mexico, Marshall at East Carolina, and UC Davis at Nevada. So these are the only remaining Week Zero games involving Power Five teams. And while these both feature P5 teams against FCS teams, which likely isn’t quite as big of a draw as the P5-Group of Five or indepedent matchups that were supposed to happen in Week Zero (Cal-UNLV, Hawaii-Arizona, and New Mexico State-UCLA), there may be more wide appeal to them than the other three remaining Week Zero games without Power Five teams.

At least Marshall-East Carolina involves two Group of Five FBS teams (from Conference USA and the AAC respectively), while Idaho State-New Mexico is FCS vs. Group of Five (Big Sky and Mountain West) and UC Davis-Nevada is the same (Big Sky and Mountain West). So there’s a fair bit of appeal to Missouri State-Oklahoma and Southern Illinois-Kansas. And there’s perhaps some extra spice still from that Missouri State-Oklahoma game featuring former Louisville, Arkansas and Western Kentucky coach Bobby Petrino in his first game as the Bears’ head coach. So this definitely improves the Week Zero TV schedule as it currently stands.

It is quite something to see Big 12 schools moving up games (in the case of Oklahoma) or carrying on with (in the case of Kansas) Week Zero games while other conferences like the Pac-12 are moving their schedule. The Sooners’ stated thinking, as per a statement from athletic director Joe Castiglione, is to provide more flexibility in their schedule later on in case COVID-19 difficulties require later rescheduling.

The NCAA approved a waiver request from both schools to change the game date to allow them more schedule flexibility in addressing potential issues related to the COVID-19 pandemic. OU’s second game of the season is scheduled for Sept. 12 in Norman while its third contest is slated for Sept. 26 at Army in West Point, N.Y.

“If the season is indeed permitted to start as scheduled, the benefit of extra time between games will help our teams manage any variety of possible circumstances that may occur,” said Castiglione. “Our original schedule had an open date between the second and third games, so now we will have a span of five weeks to play three games. It provides us a more gradual approach to safely manage the conditions of these unprecedented times. We’re thankful to Missouri State for their cooperation during this process and to the NCAA for allowing both teams to start the season a week earlier.”

We’ll see if these Aug. 29 games go ahead as planned. But it’s certainly interesting to see this approach from Kansas and Oklahoma.