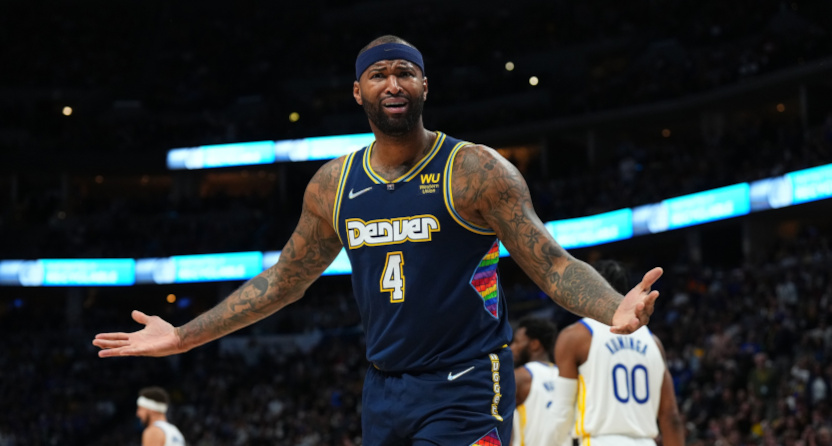 Cursing has long shown up on sports broadcasts and in sports media, including with the 10 f-bombs the Bally Sports Detroit broadcast picked up from Javy Baez Tuesday, but the response to it varies. Aside from broadcast TV (and particularly aside from Super Bowl broadcasts), there’s unlikely to be any FCC intervention, so a response if any comes from the outlet; that can vary from ESPN apologizing for airing a f-bomb from their own documentary in a SportsCenter promo for it (but being fine with all the things Stephen A. Smith doesn’t give a damn about) to Peacock’s Pro Football Talk Live specifically not apologizing for a Chris Simms f-bomb.

But print pieces are different, particularly in how they’re not live (apart from, say, digital live blogs). There’s a turnaround from quote-gathering to published piece, so quotes (and curses) that appear in an outlet are an intentional reflection of that outlet’s style standards (which vary widely). And that’s perhaps the most disturbing information found in an overall-troubling piece from Howard Beck at Sports Illustrated on the record fines of at least $95,000 the NBA has handed out to its players for press conference and social media profanities this year (not counting slurs, which are handled separately);  it wasn’t a fine, but the league handed a warning to Nuggets’ center DeMarcus Cousins over profanity that ESPN’s Andscape (the former The Undefeated) chose to print in a Marc J. Spears piece on Cousins in April. Here’s more on that from Beck’s piece (which comes with the delightful editor’s note of “This story contains explicit language. Sports Illustrated typically censors profanity and vulgar language but is making an exception due to the subject of this story.”):

The league has also issued multiple warnings or fines privately—“in the teens,” per a league official. Among those said to be on that list, according to a source: Nuggets center DeMarcus Cousins, who was put on notice after using multiple profanities (including fuck, shit and bullshit) in an April interview with Andscape—quotes that appeared only in print, not on video or audio. And although the NBA has not yet begun policing the players’ own podcasts, league officials won’t rule it out in the future.

Simply put, the NBA does not want players cursing in any setting—not on TV or on their IG, not in the rain or while they train, not with a computer mouse, and presumably not with Danuel House.

“​​We want to have a look and a feel that’s professional,” [NBA president of league operations Byron] Spruell says. “So to ask to take those words out? I think that’s an OK ask.”

That is absolutely not an okay ask, in particular when it comes to players’ own social media platforms. But it’s even worse of an ask when it comes to what players are saying in print or podcast interviews. With profanity in on-court or press conference interviews, the league can make an argument of unintentional exposure; “Well, little Jimmy sitting courtside or watching on TV or watching a press conference might hear profanity against his parents’ wishes!”

This is not a great argument, as Jimmy’s almost certainly hearing this somewhere anyway (including possibly during game broadcasts on field or sideline mics). But there is at least the case that viewers might not expect f-bombs they sometimes get in on-court and press conference interviews. But with players’ social media presences and even more with players’ printed or podcast interviews, those are opt-in situations; the outlet in question makes decisions on what it feels is appropriate, and readers or listeners then choose whether to consume that or not. (There can be a potential disconnect if there isn’t a content warning, but that’s for annoyed consumers to take up with the outlet.)

And the warning to Cousins is particularly bad. That is the NBA telling a media outlet (and one of their rights partners) that they, in all their infallible magnificence, understand profanity standards better than that outlet. It’s the league saying “Well, you’re not offended by this, and you chose to run it, but we’re offended by it.” And it’s the league telling its players that they can’t freely communicate with even print media. Something Beck writes there is notable, too; there’s a rise in outlets willing to print uncensored profanity, and rather than trust those outlets to set their own editorial standards, the league is complaining to players about giving those outlets those quotes.

Exacerbating the league’s concerns: The evolving state of media and social media. Newer outlets like The Athletic and many independent platforms freely print profanities in full, rather than dashing them out (“f —”) or replacing them with parentheticals (“Get the [expletive] out of here.”), as most mainstream newspapers and magazines did for decades (including Sports Illustrated, which still uses this practice). The quotes then get disseminated on Twitter and Instagram, increasing the impact exponentially—and making league officials all the more queasy.

“Certainly that evolution has some context to it and some impact on how we’re thinking about it, as well,” Spruell says.

But that absolutely should not be the case. To borrow from Pierre Trudeau, the league has no business in the standards and practices departments of the media. It’s an incredible overreach for the NBA to think that they should be able to decide what levels of profanity outlets choose to print. (And they can’t dictate this to those media outlets in any other form than in telling their players not to curse; those outlets are free to use profanity elsewhere.) And it’s also an overreach for the league to tell players what they can and cannot say on social media, and possibly soon, what they can and cannot say on their own podcasts. Fortunately, the players’ association is pushing back a little, as Beck notes:

The crackdown has raised concerns for officials with the National Basketball Players Association, who say they were never consulted on the matter. Targeting quotes from off-air interviews, as in the Cousins case, was perhaps even more alarming. Union officials also note that the collective bargaining agreement contains no specific prohibition against foul language.

The union’s stance might best be summed up as GTFO (Get The Fines Out of here).

“Players showing emotion by cursing or using other strong language is not new and is something that will continue to naturally occur, considering the intensity and extremely high level of competition in our league,” the NBPA said in a statement. “We’re currently discussing these matters with the league and hope to gain some clarity and resolution both with respect to the discipline already imposed and the issue in general going forward.”

And this is something where it makes sense for the media to weigh in on the players’ side. This is a disturbing level of attempted censorship from the NBA, especially when it extends to independent media outlets choosing to relay players’ profanities. The NBA should not be allowed to dictate how its players talk to the media, or how media outlets choose to relay those quotes. And, as the academics Beck quotes note, profanity of this sort really isn’t a concern for most people, especially younger people. So it’s troubling that the NBA is being so regressive here. And there are elements of the problematic past pre-relaxed dress code that come to mind with this approach; this is the league telling its players to act and speak a certain way because of what it thinks its audience wants from them, never mind what that audience actually wants.

And yes, the actual amounts of the fines here aren’t all that notable (as Draymond Green has pointed out). But the principle matters. The league hands down similar fines for more concerning things, such as violating league policies on media availabilities, and there’s a problematic implication that it’s worth equal discipline for truthfully communicating how you feel to a media outlet that then decides to print those quotes without censorship. The appropriate reaction to the NBA’s actions is the call-and-response from Mony Mony.