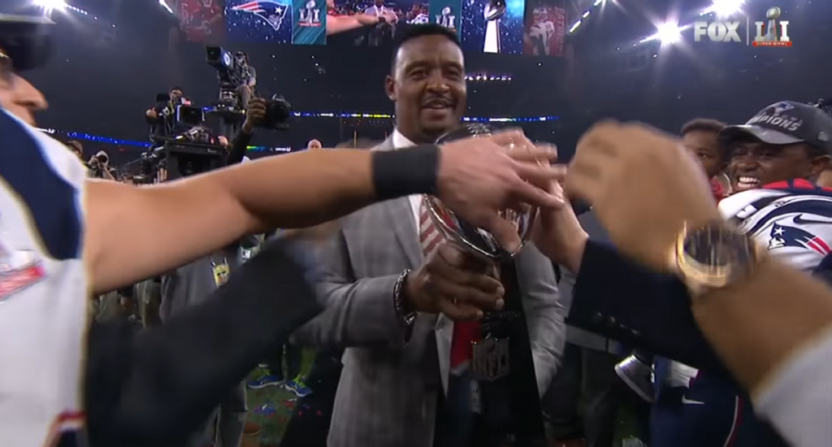 The Federal Communications Commission received many complaints about explicit language used during the Super Bowl LI trophy presentation on Fox, according to records obtained by SB Nation.

Former New England Patriots linebacker Willie McGinest dropped several F-bombs while carrying the Lombardi trophy, and many of the Patriots players then joined in. Well, the Fox camera happened to be right there, and there was no censoring or delay on the broadcast.

Naturally, this didn’t sit well with many people, especially parents that had children around during the explicit language.

Here are a few that SB Nation obtained:

“I was feeling inspiration for the kids, that anything is possible for my childrens [sic] future. The whole time they are walking the trophy down you hear the F word or MF over and over. It was ridiculous to have people that your kids look up to, hearing verbiage like that. I thought there was a mandaty [sic] time delay for reasons like this. I didn’t invite that language into my house but yet it was there during family TV time. I’m outraged that the technology provided doesn’t better protect innocent ones from those obscenities.”

“I cannot believe Willie McGinest is so uncouth he cannot find a better word than motherfu##er while carrying the Lombardi trophy past players and fans. This happened after Superbowl 51 on Feb 5 2017. Obviously fox was unaware because it was not bleeped out. He told fans and players to kiss it, kiss this motherfu##er, tongue kiss it. I mean really. And while staring into camera.”

“Patriots came back and deserved the win no doubt, however when Willie McGinest was walking the trophy to the stage all of my good feelings for the show were lost! I lost count how many times the “f-bomb” was dropped not to mention the innuendos. Many children stayed up to watch this great show and they were exposed to such vulgarity. Has our culture changed so much as to expect this as a norm? Not cool!”

“The individual parading the trophy encouraged and solicited the players to use the language and gestures. His own words included ‘KISS THIS MOTHERFUCKER’, and more. It appeared that all Patriot players participated as the trophy walked amid a double line with a live camera broadcasting it all. A majority of the team used language that repeatedly included ‘LET ME KISS THAT MOTHER FUCKER’, ‘I’ll KISS THAT BITCH’, and much more. There is no question that millions of children were subjected to this lewd and lowlife display.”

Some of them seemed particularly hung up on the race of the cussers.

“The African American guy carrying a silver trophy was yelling “motherfucker” at least two times. This is inappropriate for young viewers and Fox has crossed the line as well as the NFL.”

Fox likely won’t get fined, as the trophy presentation occurred during the safe harbor period after 10 PM ET. Indecent and profane material is allowed on TV at this time per the FCC, but not “obscene” material, as SB Nation explains:

While the word “fuck” is explicitly deemed by the organization as profane, The Super Bowl ended at 10:24 p.m. ET. Any complaints about postgame cursing are rendered moot because that falls in what is called the “safe harbor period” between 10 p.m. and 6 a.m.

During this time, indecent and profane material may be aired, according to the FCC. Obscene material may not be. The word “fuck” is not considered obscene by the FCC. Even if the word is used before 10 p.m., there is the matter of context to be considered.