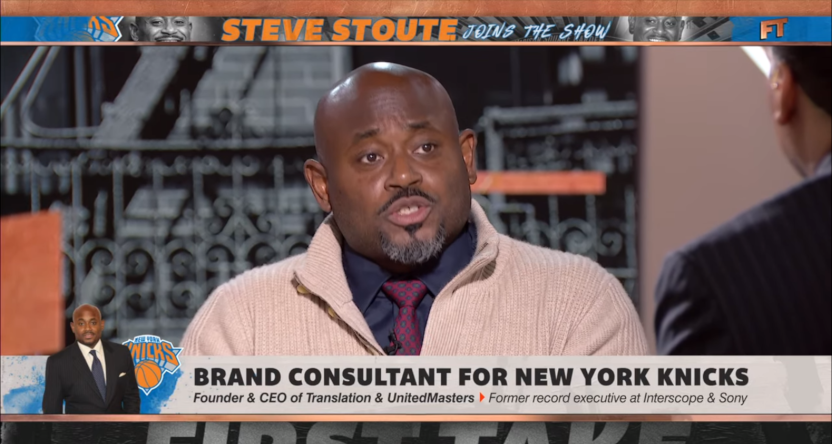 The New York Knicks’ run as the punchline of the NBA is continuing. Last week, the team hired Steve Stoute and his Translation marketing agency “in an attempt to bolster its brand and strengthen its ties to the fan base,” but boy, that hasn’t worked out so far. Stoute’s first televised interview in that role came on ESPN’s First Take Tuesday (and if that alone isn’t a disastrous decision, it’s hard to say what is), and it led to him saying that the Knicks were set to fire interim coach Mike Miller and his staff (despite no new team president being named yet). From Zach Brazillier of The New York Post:

In an interview with ESPN’s “First Take,” Stoute denied he was responsible for firing former team president Steve Mills, but essentially got rid of the current coaching staff on the air despite the franchise’s new power structure not yet in place.

It was so very Knicks from the man who is supposed to be rebranding the franchise’s tattered image.

“There had to be a change in [firing team president Steve Mills]. That change will bring a new coach and new coaches that are going to help develop these younger players,” Stoute said. “And they got some young players — you see RJ Barrett, Mitch Robinson. They got something to work with. And getting a coach in there and ultimately getting a coach and a coaching staff that’s going to help develop a team. That’s what I expect to happen so that we can actually get to what you expect from a New York team.

“Having a coach like that who has the magnitude and gravitas so that the media would love to talk to him and believe him, I think that’s super important.”

Yeah, it probably shouldn’t be the branding consultant who’s making the decisions on whether to fire a coach or not before a new president is even named. And regardless or not of if whoever the new president will be (reports suggest it will be CAA agent Leon Rose) eventually elects to part ways with Miller, it’s not a good look to say he’s gone on national television before the guy who’s supposed to be making that decision has even been named. And you’d think a branding consultant would understand that and avoid that. But that didn’t happen here, and that led to the Knicks’ PR team putting out a statement that Stoute doesn’t have the authority to fire Miller and “does not speak on behalf of New York Knicks personnel and basketball operations” (despite all the claims Stoute made on First Take about his role in bringing in a management team and athletes). That statement also saw Stoute taking back his remarks:

Statements from the New York Knicks and Steve Stoute pic.twitter.com/jDN07qHllO

Stoute has found significant success as a record executive (including at Interscope and Sony) and marketer (he’s worked with everyone from State Farm to McDonald’s to Anheuser-Busch InBev, and helped promote the Student Athlete documentary LeBron James helped produce this fall (leading to positive comments from James following his hire). So there’s some merit to bringing him in, and some of the storylines he mentions in that First Take interview may absolutely wind up being good ways to sell people on an improved Knicks’ brand; if they bring in a prominent management team and coaching staff, and particularly if they can land some big free agents, that could build some excitement about them.

And Stoute may wind up playing a role there; he references Drake’s “team ambassador” role with the Toronto Raptors, which has involved a lot of promotion (both to fans and perhaps even to players), and Stoute could maybe do something similar with the Knicks. And his logic that people may even change their minds on much-despised owner James Dolan if the team starts winning isn’t necessarily wrong; the point he makes about Yankees’ fans changing their mind on George Steinbrenner when the team’s fortunes improved is valid.

But Stoute’s decision to have his first interview about this role be on First Take was a problematic one from the start (yes, show up on the yelling show where they regularly make a point of bashing the Knicks!). And his decision to make comments about bringing in a new coaching staff when the old one’s still there was a real bad look; it’s comments like that that illustrate the dysfunction of the organization. Yes, by all means, change the coaching staff if you want, but do it the right way; hire the president, announce if the general manager is staying or is being replaced, and then announce who the coach will be. Having someone who’s just billed as a brand consultant casually announce on national TV that the coaching staff will be replaced (before the president or GM decisions are official) is a terrible idea, and one that might further add to the “why would you want to coach the Knicks?” pile.

And part of the challenge here is with Stoute’s listed role. If the Knicks actually want Stoute making basketball decisions, that’s fine; they could give him a title along those lines, and have him make those comments at the appropriate time. Instead, they’ve billed him as a brand consultant, but he’s out there talking about executive and personnel decisions. And that’s how you wind up with a brand consultant creating a PR crisis, and that’s so incredibly Knicks it hurts.