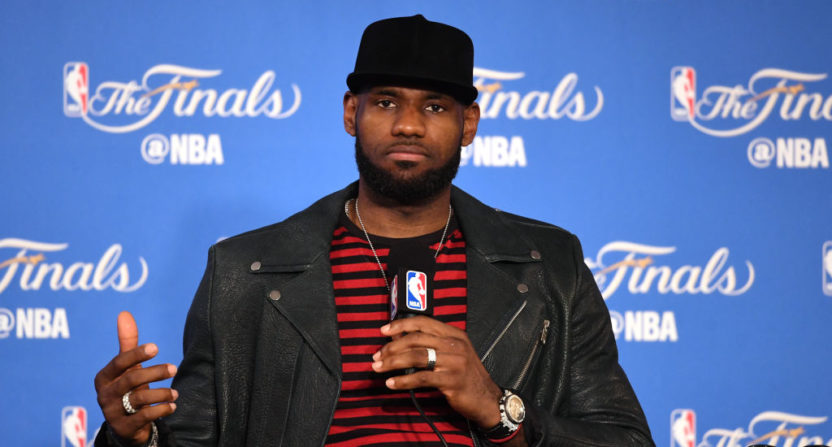 We know where LeBron James is taking his talents next. Well, in the sports media arena, at least. While there’s still plenty of discussion about which NBA team James will land with this summer, there is some news on what he’s up to off the court, and it involves serving as the executive producer of Student Athlete, a new HBO Sports documentary coming this fall that has the NCAA in its crosshairs.

The documentary, which will premiere on HBO Oct. 2, will be directed by Sharmeen Obaid-Chinoy (who won “Best Documentary, Short Subjects” Oscars for Saving Face and A Girl in the River: The Price of Forgiveness, both of which aired on HBO) and by Trish Dalton (who directed Bordering on Treason and Election Year). It will be produced by Maverick Carter and Jamal Henderson (with James’ SpringHill Entertainment) and Steve Stoute (with United Masters). Rick Bernstein is the executive producer for HBO Sports, while Joe Perskie is the supervising producer. So those are certainly plenty of big names, and it sounds like they’re putting a big target on the NCAA:

“This is an incredibly important story about the institutional denial of basic human rights for these student athletes,” says Maverick Carter, CEO of SpringHill Entertainment. “When Steve Stoute brought us this idea, it was a perfect fit for the kind of stories we want to tell at SpringHill. We’re excited to work with one of the best human rights storytellers in Sharmeen Obaid-Chinoy to help people see and feel how this issue impacts the lives of those living it.”

Unpaid college athletes generate billions of dollars for their institutions every year. STUDENT ATHLETE unveils the exploitative world of high-revenue college sports through the stories of four young men at different stages of their athletic careers, as well as a coach-turned-advocate and a whistle-blowing shoe rep who exposes the money trail. The documentary spotlights: former NCAA and NFL coach John Shoop; New Jersey high school basketball phenom Nick Richards, now at the University of Kentucky; Mike Shaw, who played at the University of Illinois and Bradley University; Shamar Graves, a former wide receiver at Rutgers University; and Silas Nacita, a walk-on who played at Baylor University.

…”The NCAA blinded by revenue goals is turning student athletes into full-time employees,” said Steve Stoute, Founder & CEO of United Masters.  “This documentary is incredibly important as it debunks the myth that student athletes are being fairly compensated by receiving scholarships and a valuable education. In fact, the demands put on these students by this oppressive system makes it impossible for them to get the education they deserve. The time is now to end this false narrative and reveal the truth of this exploitation.”

Directors Sharmeen Obaid-Chinoy and Trish Dalton say, “We embedded in the world of men’s college basketball and football, capturing athletes’ hopes and dreams being shattered by the harsh reality of what it means to be a ‘student athlete’ in a billion-dollar industry.”

Yeah, that makes it pretty clear what this documentary’s perspective on the whole student athlete/paying players debate will be. And James’ involvement with this is interesting; while he never attended college himself, and some have used that as a reason to say he can’t call the NCAA corrupt, he certainly went through the recruiting process and got a whole lot of legitimate and illegitimate offers. He’s also seen how the NCAA setup has played out for countless teammates and friends, which led to some of those comments he made about his issues with that organization.

This seems like a documentary that will get a lot of attention, and, at the very least, be an interesting entry into the discussion around the NCAA. It’s notable to see James taking a firm stand on a controversial topic like this, and it’s also notable to see him involved in an ambitious project of this sort. Plenty of athletes have turned to movies and TV post-career, but James continues to expand his media empire even while he’s still playing. And while he’ll be playing basketball for some NBA team when this airs this fall and making an on-court impact, he’ll also likely make an impact of some sort off the court with this film, however it turns out.