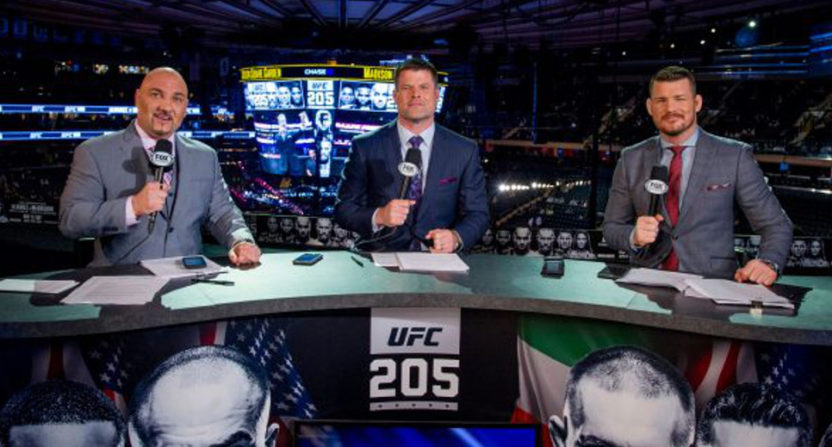 Commentary shakeups in the mixed martial arts world are continuing, and the latest has a former UFC commentator who still works for the network that broadcasts the promotion signing a deal with competitor Bellator. Last week, the UFC added long-time Bellator broadcaster Jimmy Smith, not long after Smith and Bellator couldn’t come to terms on a new deal; this week, Bellator has brought in Jay Glazer, the Fox NFL insider who’s also done lots of UFC work for Fox in the past, particularly hosting pre- and post-fight shows (although he’s done less of that recently).

Glazer (seen at left above hosting UFC 205 coverage on Fox in November 2016) will start by hosting the desk on Bellator 192 on Paramount Network (formerly Spike) Saturday, but he’ll be doing digital segments for Bellator as well. Both he and Bellator president Scott Coker talked about the move in a release:

“I’m excited to welcome Jay Glazer to the Bellator family,” Bellator President Scott Coker said. “Jay’s knowledge and experience in sports television speaks for itself and he will be a great addition to our incredible broadcast team. As Bellator moves to Paramount Network, I look forward to having him involved with some of the biggest fights of the year.”

“I have always had a tremendous passion for MMA, where the relationships you develop are unlike any other sport, said Glazer.  “And I am very fortunate to be able to continue these relationships with an incredible organization like Bellator.  I’ve been friends with Scott for many years, and am ecstatic that he brought me into the Bellator family.”

MMAjunkie’s Matt Erickson writes that Glazer told him the Bellator work won’t interfere with his NFL work or his other projects:

Glazer’s main role with FOX is as the network’s NFL Insider, appearing on pre- and post-game coverage throughout the regular season and playoffs. Glazer today told MMAjunkie his duties with FOX’s NFL coverage are not changing, nor are any of his other non-MMA gigs.

And those gigs are many. He has a recurring role on the HBO series “Ballers,” starring Dwayne Johnson, which soon will begin shooting its fourth season. He owns the Unbreakable Performance Center in West Hollywood, Calif., which is a training facility used by many high-level athletes and entertainers. And his Merging Vets & Players foundation works with military veterans and athletes to help them transition to lives away from sports and combat.

This is part of a larger broadcast makeover at Bellator, which hired former UFC play-by-play commentator Mike Goldberg and former Pride/WWE commentator Mauro Ranallo last summer and recently added former UFC official “Big John” McCarthy. Their broadcast Saturday will have Goldberg and Ranallo on play-by-play, McCarthy and Chael Sonnen (who’s also in one of the fights) as color commentators, and Jenn Brown as reporter. But the Glazer addition is particularly interesting, especially considering his continuing role with Fox. (They may want to remove the “hosts the live FS1 UFC WEIGH-INS, FS1 UFC FIGHT NIGHT PREFIGHT and FS1 UFC FIGHT NIGHT POSTFIGHT SHOWS, breaking down the matchups, profiling fights and providing expert analysis” part from Glazer’s official bio, though.)

Of course, it’s uncertain that Fox will be a UFC broadcaster for long. Their contract expires this year, and they’ve reportedly offered the promotion only a small increase over the existing $200 million annual contract, a long way from the boost to $400 million annually the UFC has reportedly been seeking. And this isn’t necessarily a huge conflict even if the UFC does stay with Fox; as mentioned above, Glazer has been used less frequently on UFC shows in recent months, so perhaps they were moving in a different direction already. Still, it’s certainly notable to see a long-time MMA personality associated with the UFC and its broadcast network head to a competitor while still keeping his other role with that broadcast network.