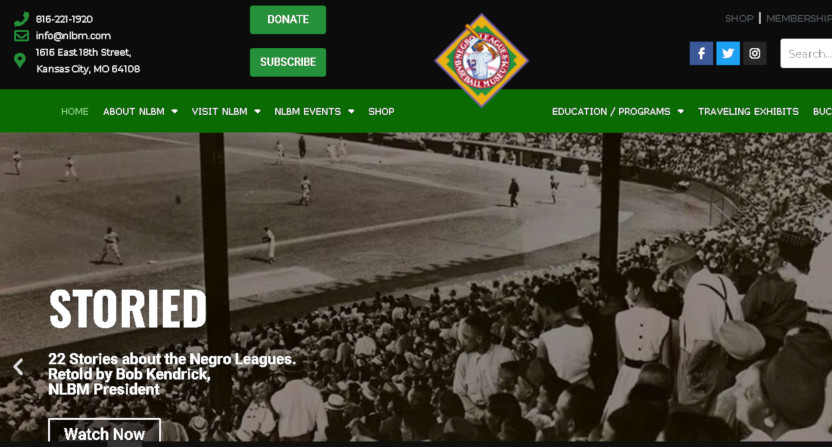 For anyone who cares about baseball history, the story of the Negro Leagues Baseball Museum in Kansas City has been fascinating. That museum was founded as a not-for-profit organization in 1990 and opened its doors to the public in a one-room location in 1991; they moved into their current home at 18th and Vine in 1997 (under the leadership of then-chairman John “Buck” O’Neil, a legendary figure in his own right), and they’ve continued to grow from there. And the last couple of years have further added to their story in remarkable ways.

There, the museum has helped to support productions of stories on people like Toni Stone. They’ve helped to conduct special events around the 100th anniversary of the 1920 founding of the Negro National League. They ran the “Tip Your Cap” campaign last year, and they contributed to discussions about Negro Leagues statistics like the Real Sports piece last October, with MLB finally recognizing the Negro Leagues as “major league” last December.  Since then, museum president Bob Kendrick launched a “Black Diamonds” Negro Leagues history podcast with Sirius XM this year, and Apple Studios is now reportedly developing a series on the Negro Leagues. But even with all that, it’s still remarkable to see Kendrick and the museum spotlighted on the front page of USA Today:

The boss Is on the front cover of @USATODAY. So Proud of this guy. The BEST storyteller in America & caretaker of America’s past time. If he’s not in the office, I know where to find him. Downstairs close by the legends talking to whoever wants to listen. Congratulations Bob!⚾️ pic.twitter.com/B5tHRM74r2

That piece (for USA Today subscribers only) does a good job of showing how the Negro Leagues discussion has changed dramatically over the decades since the museum’s founding. This history used to be out of sight, out of mind for most people, but it’s received an incredible amount of discussion in the past couple of decades, bolstered by the efforts of people like O’Neil, Kendrick, and Sinks (who joined the organization late in 2020, and has become a key face and voice of the museum). And while MLB’s declaration of the Negro Leagues as major leagues carries some ongoing challenges, it’s further bolstered the interest in this part of baseball history.

And it’s notable that a lot of people are still supporting this museum and its efforts, including Posnanski (author of The Soul of Baseball on his travels with O’Neil and Kendrick, plus many more books, plus a writer for newspapers, Sports Illustrated, The Athletic, and now his own Substack), who announced on Oct. 21 that the museum would be the first charity partner of the PosCast (the long-running podcast he hosts with famed TV writer and producer Mike Schur). And for why this matters, it’s worth looking back at the Kansas City Star column Posnanski wrote that he reran on Oct. 6, the 15th anniversary of O’Neil’s death. Some key parts of that:

Buck loved telling Negro Leagues stories. For many years, he said, people didn’t want to listen. People seemed offended somehow when he told them that Negro Leaguer Oscar Charleston was as good as Ty Cobb or his friend Hilton Smith might have been as good as Bob Feller. He kept telling the stories because he thought it was important.

“Sometimes,” he said, “I think God may have kept me on this earth for a long time so I could bear witness to the Negro Leagues.”

…Two years later, he had the second-greatest day of his life. The new and expanded Negro Leagues Baseball Museum opened up on the famous corner of 18th and Vine — the same corner where on those long ago Saturday nights, Buck would listen to that great jazz and talk about the baseball games to come. He had spent many of his later years trying to make the museum a reality. The opening touched his heart.

And maybe that’s the key thing to take away here. At long last, the Negro Leagues and the people who played in them are starting to get more official recognition. And that’s tremendous to see, and it’s very positive for the future. But amidst all that, it’s worth looking back at the people like O’Neil and Kendrick (to say nothing of statisticians like  who put so much effort into getting this off the ground at a time when so few people seemed to cared. They pushed on, and they built that bridge, and that’s now benefiting a lot of people. And it’s helping the world learn about a remarkable part of sports history.

[USA Today; photo from the NLBM]