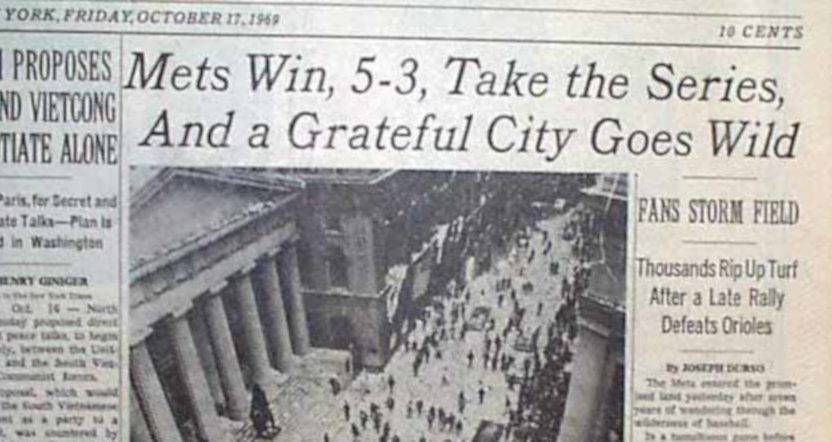 Many sports documentaries center on an individual athlete, with some going wider to look at a team or teams and some going wider still to examine an entire sport. But there have only been a few that have focused on happenings across sports at a given time (including 30 for 30 installment June 17, 1994). Now, SNY is exploring football, basketball, and baseball in the upcoming documentary 62,000:1 – Three Teams, One City, One Year, which will premiere on the network on July 3 after the Mets-Yankees postgame show and cover the championships won by the Jets, Mets and Knicks (in 1969, 1969 and 1970 respectively).

Here’s more from SNY’s release on that:

In partnership with Hollywood producer Basil Iwanyk (John Wick, Sicario, The Town) and his company Thunder Road Films, and directed by Pete Sillen (I am Secretly an Important Man), 62,000:1 tells the story of New York in 1969, a city divided and unraveled by war, riots and strikes held together by an improbable championship sports year. The film will dive into the universal and timeless theme of fandom, never giving up, and the power of a city rallying behind its teams to overcome great odds and achieve the unthinkable.

“Three teams from one city winning championships in one year is such a remarkable feat that it has only happened twice in the history of sports in our country,” said Steve Raab, President of SNY. “We felt compelled to not only commemorate the 50th Anniversary of New York’s Championship year – but also to share this remarkable piece of the city’s history in a contemporary way that is relevant to fans of all ages.”

“As a life-long and obsessive fan of the Mets, Jets, and Knicks, it is one of the true highlights of my career to be entrusted to tell the story of these three teams and show the collective strength, devotion, and humor of the best fans in the best city in the world: New York,” added Basil Iwanyk.

Really, it should be titled “Three Teams, One City, 16 Months,” as that’s the timeframe between the Jets’ Super Bowl win (January 12, 1969) and the Knicks’ NBA championship (May 8, 1970). But it is still unusual to see a city win two highest level championships in a calendar year and three in slightly beyond that; Wikipedia’s list has only 15 entries for multiple highest level championships won by a metropolitan area in a calendar year, with all those topping out at two, and the three elsewhere SNY appears to be referencing would seem to be about Detroit in 1935-36 (Tigers with the 1935 World Series, Lions with the 1935 NFL title, Red Wings with the 1935-36 Stanley Cup). So this certainly isn’t a common occurrence.

This SNY documentary is also notable because of how things have gone for these teams since, especially compared to the other New York teams. The Knicks won another NBA championship in the 1972-73 season and won conference titles in 1994 and 1999, but that’s it. The Jets won division titles in 1998 and 2002, and made the conference championship game in 2010 and 2011, but that’s it for them. And the Mets won the 1986 World Series and appeared in the World Series in 2000 and 2015, making their title drought of 33 years this year the lowest of the three teams in this documentary. Meanwhile, since 1986 alone, the Yankees have five World Series titles, the Giants have three Super Bowls, the Devils have three Stanley Cups, and the Rangers have a Stanley Cup. So there might be some fans of the Knicks, Mets and Jets (and maybe even all three) eager to relive the good old days.

It’s also interesting to see more local network efforts in the sports documentary field. We’ve seen this a bit here and there (amongst other efforts, Fox Sports Detroit did The Roar of ’84 on that year’s Tigers, NBC Bay Area did a documentary on both Giants’ and A’s history, and NBC Sports Bay Area did Letters To 87 about Dwight Clark), but there haven’t been a ton of them. And yet, looking back at a particular city’s championship teams seems to make more sense for a local network than for a national audience, and there’s certainly plenty of material that could be mined for those. We’ll see if we see more of these down the road.

[Photo of the Oct. 17 New York Times from RareNewspapers.com]