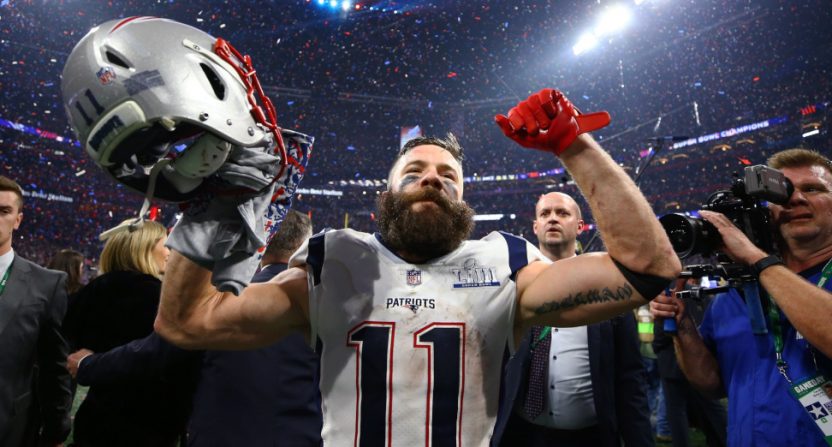 There have been quite a few sports documentaries on Showtime in the last few years, including Perfect In ’76 (Indiana basketball’s perfect season), Tough Guys (the 1980s MMA scene in Pittsburgh), Disgraced (Dave Bliss and the 2003 Baylor basketball scandal), Bipolar Rock N’Roller (Mauro Ranallo and mental health), Shut Up And Dribble (a LeBron James/Gotham Chopra look at the NBA on and off the court), Action (sports gambling) and Quiet Storm: The Ron Artest Story. They’ve now announced another one coming later this month, 100%: Julian Edelman.

The documentary will focus on the challenges Edelman faced in his return to the NFL after missing the entire 2017 season following an ACL tear in a preseason game, and after being suspended for the first four games of the 2018 season for violating the NFL policy on performance-enhancing substances. Assaf Swissa, Edelman’s business partner, is an executive producer and co-writer (along with director Kyler Schelling), and Edelman is credited as a producer as well. The film is narrated by Michael Rapaport and includes “original conversations with everyone from Mark Wahlberg to Snoop Dogg, Tom Brady, Michael Strahan and Deion Sanders.” It’s going to premiere on Showtime at 9 p.m. ET/PT on June 28. Here’s more from Showtime’s release, plus the film’s poster: 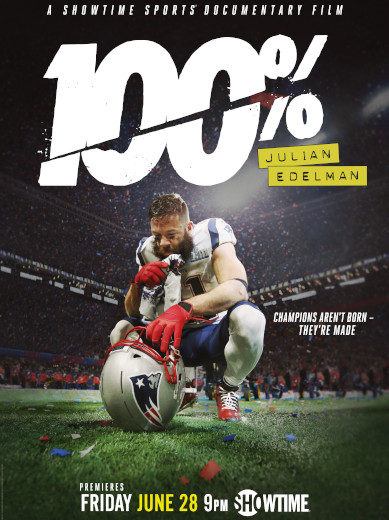 When injury and controversy threatened Julian Edelman’s NFL career, he returned to his father, an auto mechanic, to fix what was broken. 100% is an intimate behind the scenes look at the three-time Super Bowl Champion during a critical juncture in his life. After a dramatic victory in Super Bowl 51, Edelman suffered a devastating knee injury that forced him to miss the entirety of the 2017 season. The film joins Edelman as he attempts to overcome the challenge of a season ending surgery and PED suspension all while exposing the unorthodox origins that built him into one of the NFL’s most affable stars.

“While Julian Edelman’s journey to Super Bowl MVP is acutely unique, sports fans everywhere will relate to his determination and his reliance on an inner circle of family and friends to overcome seemingly insurmountable odds,” said Stephen Espinoza, President, Sports and Event Programming, Showtime Networks Inc. “The access and timeliness of this project are the hallmarks of SHOWTIME Sports unscripted programming. We are proud to deliver the life story of one of America’s most popular athletes amidst a career-defining moment.”

“If you would have told me when I got hurt two years ago that 100% would be the result, I wouldn’t have believed you,” said Edelman. “SHOWTIME has been amazing. It turns out making movies is a lot of fun.”

“Much like Jules’ career, 100% probably should have never happened, but SHOWTIME shared our vision, and empowered us creatively to make something we hope is unlike anything you’ve seen before,” said Assaf Swissa, Edelman’s business partner and the film’s executive producer.

It’s going to be interesting to see how this turns out. Edelman doesn’t necessarily have as high of a profile as many of the athletes who have done documentary series or features (including his teammate Brady), and a recovery from injury alone wouldn’t necessarily seem to warrant a major network documentary. But Edelman’s certainly as prominent as he’s ever been after winning the Super Bowl MVP award this year, and coming back from an ACL tear and a PED suspension to that is impressive; he does also have a good origin story as a quarterback at the College of San Mateo and Kent State turned seventh-round draft pick turned NFL return specialist turned featured receiver.

With both Swissa and Edelman heavily involved in this project, it seems like it’s going to be more Edelman’s side of the story than a neutral look. But that’s been the case for many athlete projects recently, and it has the upside of perhaps more access than you might see in an outside production. We’ll see how 100% turns out and how much of an audience it gets.