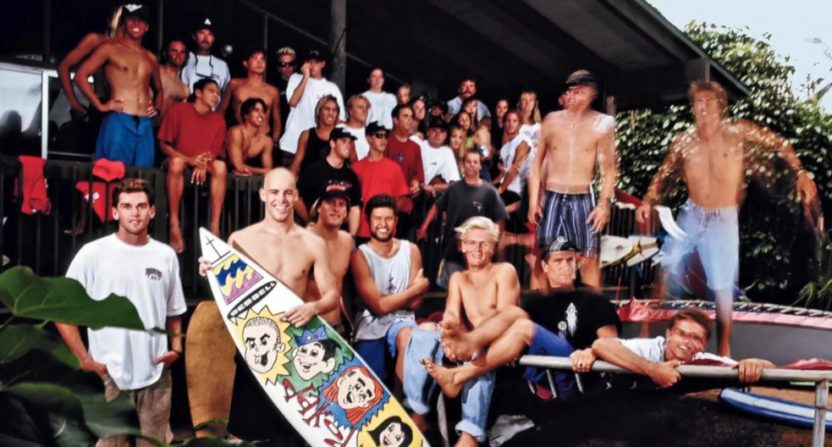 HBO’s Momentum Generation, which first airs Tuesday at 10 p.m. ET/PT, is a documentary that’s telling several different stories. It can be seen as the story of a group of top athletes who grew up together, endured tragedy, cut some ties to each other and then reunited. It can be seen as the story of how Americans came to dominate competitive surfing in the 1990s and steal the spotlight from Australians. It can be seen as a story of surfing’s rise in popular culture, from Baywatch to punk rock to surfing videos. But it’s all of those stories at once, and directors Jeff and Michael Zimbalist (known for their work on 30 for 30 installments The Two Escobars and Youngstown Boys, plus Fox’s Nossa Chape and more) do a terrific job of intertwining these threads to produce a compelling documentary.

The film focuses on a group of American surfers who first wound up on the North Shore of Oahu, Hawaii as teenagers during the winter season in the early 1990s, particularly at a house owned by Benji Weatherley’s mother Barbara. It includes in-depth interviews with the key members of that group, including the Weatherleys, Kelly Slater, Rob Machado, Shane Dorian, Taylor Knox, Kalani Robb, Ross Williams, and Pat O’Connell. And the main story arc covers how these athletes came together from wildly different backgrounds, how they bonded, and how they came to dominate the professional surfing scene.

But there’s a lot of other interesting material in here as well. That includes a segment on the key surfers’ roles in Taylor Steele’s surfing films (including the 1992 VHS release Momentum, which gives this documentary its title; Steele is interviewed here as well, and has some interesting comments) and how important those were to promoting the sport more widely, on surfing’s association with the punk rock scene of the 90s (including interviews with Pennywise’s Fletcher Dragge and blink-182’s Tom DeLonge, both bands featured in Steele’s early films), how the group responded to the death of friend Todd Chesser, the ups and downs they ran into in competition with each other over the years, and the way their group grew apart before reuniting in recent years.

The documentary does a nice job of showing these different personalities and approaches, from those focused on winning World Tour titles to those who focused on big wave surfing to those who wound up more interested in free riding. It also finds a compelling way to mix these new interviews with archival footage shot during the 90s, which includes everything from competition footage to interviews to home videos the surfers were shooting behind the scenes, with plenty of impressive wave footage included. As Slater says in this behind-the-scenes interview, it’s remarkable how it all came together:

“I didn’t know that our story would translate to the masses in some way, but then as they made the film and got into the stories and got really into the interpersonal stories between all the guys…We dove pretty deep in a lot of the interviews, and I went to places I didn’t think I was going to go, I was a little caught off guard by that. …Taylor’s movies were kind of the impetus to start these deeper friendships and understanding ourselves and the world around us. …I was surprised I cried; I thought I was just going to laugh, going to have fun, and thought it would be a good time. …Looking back now, I remember being 15, 16, and all these same guys being in a group together, going surfing together, hanging out, living in the same houses, it all sort of makes sense now looking back 30 years later that all these great things have happened to so many different people.”

Slater, who’s sometimes been portrayed as aloof, seems particularly authentic and approachable in the documentary, as illustrated by his above comments. There was genuine depth of emotion in his interviews. And that’s true with the other athletes featured here as well, who seemed to particularly open, on everything from their feuds with each other over certain boards to how they were affected by their friend’s death. Machado’s behind-the-scenes comments are also notable for what they illustrate about the relationships between these athletes, a key focus of the film:

“Early on, we had Kelly, and he was kind of put up on this pedestal to be the next greatest thing, and he’s lived up to every expectation. But we got to ride his coattails. It’s incredible looking back at what we’ve all gone through in our lives and in the lives that we’ve lived, and that we’re all really proud of it. We’re all really proud of our accomplishments and what we went through in the 90s, making surf movies, travelling the world, being kids growing up together. That was our family, and this movie is about that, about how we all kind of took care of each other. Sometimes in very subtle ways, but we were all there for each other all the time.”

With Momentum Generation, the Zimbalists do a remarkable job of providing a look into the world of surfing, into these athletes (while treating them and respecting them as athletes in a sport that’s sometimes maligned by the mainstream sports world; there’s a lot here on the challenges of competition, the way they’d go at each other and even what they’d do for a particular edge), and into their relationships with each other. There’s a big cast of interviewees here, but you get a sense of all of them over the course of the movie, and of how they interacted both back then and today. And the diversions into music, movies and more feel earned and important, providing a sense of how this all was a part of the story without getting lost in any particular rabbit hole.

Momentum Generation will appeal to  longstanding surfing fans given the new access and interviews, but it’s also accessible to those who don’t know much about the sport or its history. It’s also an interesting look at a culture and a sport that’s very different than mainstream American professional sports, and a window into how surfing transformed in the 90s. This is an excellent documentary overall, and it’s well worth a watch.