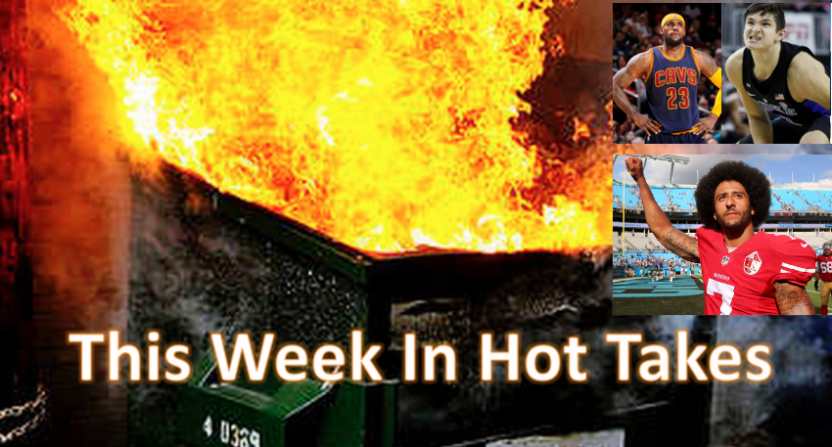 Welcome to another edition of This Week In Hot Takes. This time, we’re examining the hottest takes from sports media figures from March 17-23. Note: This column’s previous headline drew complaints and fifth hot take drew a wave of criticism. We’ve opted to change the headline and remove the offending take.

5. Stephen A. Smith thinks NBA players should be fined when their coaches rest them: There were plenty of hot takes this week on the Cleveland Cavaliers’ decision to rest LeBron James, Kyrie Irving and Kevin Love, but unsurprisingly, Stephen A. Smith came up with some of the loudest. Smith’s Final Take on this Tuesday was bad enough, blasting James for this and saying he was doing good things just to distract from it, and Smith displayed some tortured logic in this debate with Max Kellerman Monday, saying sitting out was fine if a top seed was locked up but wasn’t otherwise, but the real highlight is at the start of Monday’s First Take podcast (about 2:45 in), where Smith says James and other players who sit out should be fined (even though he also says the league office can’t really do anything about it):

“There’s just a dereliction of duty on their part, there’s no question about it. …They’re saying this because they can get away with it, the dollars are guaranteed, they’re not compromised. If that were not the case, we would not be hearing this from them. That’s what resonates with me and makes me sick about it.”

First off, fining teams for doing this is one thing, but fining players is something else, especially as these decisions are theoretically made by the coaches and the organization. Players like James certainly have substantial influence on that, but they’re not (according to job descriptions, anyway) the ones making the call on who sits. Beyond that, it’s hardly a “dereliction of duty” for coaches and players to want to maximize their chances of winning the games that actually matter in the playoffs. But sure, try to take away players’ money for this.

4. Luke Kerr-Dineen argues Duke lost because “they were too easy to hate”: For The Win’s Kerr-Dineen was last seen in these parts in December for making the argument that the Cowboys should bench Dak Prescott for Tony Romo, and he’s now back with something even more outrageous, claiming Duke lost to South Carolina not because they played poorly, or not because the Gamecocks played well, but because South Carolina was just so, so motivated by hating Duke. The whole column is delightfully easy to mock, but here are some highlights:

Duke is a better team than South Carolina, and nothing that happened on Sunday night changes that. South Carolina deserve every inch of credit for administering them a season-ending loss, of course, but the fact remains: Duke is one of the best teams in the tournament — if not the best — and when fans look back on 2017 in the months and years to come, they’ll remember it as little more than a missed opportunity.

One of the best teams that didn’t even make the Sweet 16, perhaps. Kerr-Dineen is using an interesting definition of “best” and “better” here.

But Duke has a problem, one that was especially amped-up this year because of Grayson Allen’s ongoing antics. In many ways, it was the reason its season came to a screeching halt on Sunday night.

Duke were just too easy to hate.

Sure, that’s the reason. Let’s not discuss how South Carolina coach Frank Martin’s halftime adjustments led to the Gamecocks’ 65-point second half, the most points ever surrendered in a half by a a Mike Krzyzewski-coached Duke team. Let’s not talk about the Blue Devils’ defensive errors that paved the way for a lot of those points. Let’s not talk about Duke’s poor shooting down the stretch, or their inability to box out defensively, surrendering 15 offensive rebounds. It was all about hate. Oh, and later on in this column full of hot takes, Kerr-Dineen makes a Patriots’ analogy, because of course he does:

But as fun a dynamic as that creates for fans during the tournament, it presents a unique challenge for Duke players. It’s something the New England Patriots in the NFL and, indeed, other similarly ‘unlikable’ teams have to overcome in their respective sports. When you’re the team everybody loves to hate, every win becomes more difficult.

Suddenly, teams that would otherwise have little motivation to do anything other than succumb are driving on effortlessly for victory, chasing the kind of glory South Carolina enjoyed on Sunday. When you antagonize your opponents simply by the nature of being who you are, you’re constantly having to rise to challenges just to stay in place.

First off, not sure you want to cite the reigning Super Bowl champions as someone that struggles because other teams hate them. And “otherwise have little motivation to do anything other than succumb,” really? Yeah, everyone in this tournament doesn’t care about it at all unless they’re playing Duke. Advancing to the Sweet 16? That’s not important, unless you’re playing Duke. Right. Lovely twisted logic you have there.

3. Kristine Leahy thinks NBA players have too much power: Most of the hot takes from FS1’s The Herd come from Colin Cowherd himself, but Leahy delivered a scorcher on Twitter Tuesday:

NBA Players have too much power. Mainly in resting and creating their own super teams. Now we're left with only a few real contenders.

Ah, yes, take us back to the eras of Bill Russell’s Celtics, the Showtime Lakers, and Jordan’s Bulls, when there were just so many other contenders out there. “Super teams” have always been around in the NBA; some superstars electing to join others in free agency may be a bit new, but this isn’t a league historically known for its parity.

Also, as mentioned with Smith above, blaming players for resting is also silly. Maybe look at the NBA schedule, and why certain scheduling quirks incentivize teams to rest their top players. Or look at why these coaches are opting to rest players. But sure, blame the players, who have just so, so much power in how this league operates. That’s why players’ share of basketball-related income has dropped from 57 per cent to around 50.

Workplace betting pools, which flourish during college basketball’s March Madness competition and are perceived as a harmless way of boosting employee morale, should be dumped on the ash heap of business history.

While we’re at it, let’s get rid of other collective on-the-job gambling campaigns, including employees pitching in to buy lottery tickets, running and betting on fantasy sports leagues or purchasing weekly football game squares, including the Super Bowl.

…To me, workplace wagering is not all fun and games. Despite its growing popularity, a strong argument can be made that these betting schemes are disasters-in-waiting. They hinder employees’ productivity and are at best legally ambiguous. Also, many companies are ill-prepared for the larger liability and morale problems that can arise, especially if an in-house gambling gambit goes badly, such as harming someone struggling with a gambling addiction.

Honorable mention: Mike Harrington for working “please like my sport” into his criticism of NBA players resting.

Notable absences: Skip Bayless, Shannon Sharpe, Colin Cowherd, The New York Post. Some movement at the top, with Clay Travis working himself into a tie for first.