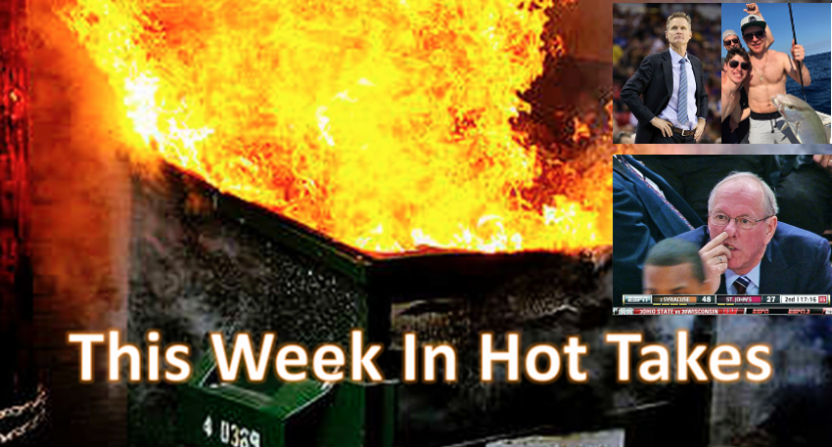 Welcome to another edition of This Week In Hot Takes. This time, we’re examining the hottest takes from sports media figures from March 10-16.

5. JT The Brick calls the Lakers’ tanking efforts “one of the worst things ever”:

“What the Lakers are doing is so despicable and embarrassing for one of the greatest organizations in the history of North American sports.” Right. They should be trying to win to get one of the top non-playoff spots and a worse draft pick, thus hurting their future? He then works this into a complaint about the Warriors sitting stars (which we’ll see later on here), and argues that the Lakers need to play to win because their tickets are expensive. This team isn’t good and might not win with a full roster, and those who bought tickets shouldn’t be expecting the Showtime-era Lakers. But sure, thinking of the long-term is “despicable and embarrassing.”

4. Mike Johnston argues members of the Toronto Maple Leafs “will regret” their fishing trip: It’s the Giants’ boat situation all over again, with media members going nuts for some reason about what players do on their days off, but this time around, it’s Canadian. (Also, it’s during the regular season, not the playoffs, and it’s in a place where they already had to be for a game.) Members of the Toronto Maple Leafs dared to go fishing in Florida Sunday ahead of Tuesday’s game with the Panthers, and dared to post photos of it on Instagram. After the Leafs lost to the Panthers, Sportnet’s Johnston (and many others) came out with hot takes that the fishing trip was a bad idea. Here’s the key part of what he wrote:

Who do the Toronto Maple Leafs think they are? The New York Giants?

When a group of Giants players took a brief New Year’s vacation to Miami less than one week prior to an NFC wild-card game against the Green Bay Packers it led to some questions. When the team proceeded to get blown out 38-13, it led to the team getting lambasted.

Whether or not the boating trip truly affected their performance isn’t quantifiable and ultimately it’s irrelevant because it’s all anyone talked about after the fact.

Ah, yes, it’s irrelevant if something actually mattered on the field because media members argued that it mattered. That’s some good logic there. But Johnston then goes on to argue both ways, saying relaxation is fine, except that this kind of relaxation isn’t?

There’s nothing wrong with camaraderie and relaxation—it’s essential to keep one’s sanity during an arduous season—except a couple players posted photos on Instagram and then the team ended up playing one of its worst games of the season.

The optics are bad.

When you’re battling tooth and nail to squeak into the playoffs, there’s no time for shenanigans or distractions. No one is saying a few Leafs fishing qualifies as shenanigans but when you lose like the Leafs did to the Panthers it’s going to be a talking point.

Every team in the world winds up with time to kill on road trips. Why does it matter how members of the Leafs chose to spend their free time? They’re not skipping practices, and they’re not doing anything wrong, but media members seem to have a bizarre perception that athletes should somehow be on the clock 24/7. (How would Johnston and those who joined him here feel if someone criticized them for going fishing or going to a bar on a day when they weren’t working?) Fishing seems utterly innocuous, and could even be seen as a team-bonding activity (isn’t it better that they’re hanging out together rather than going their separate ways?). There’s no controversy here, but Johnston and other members of the Canadian media are sure working hard to try and make one. Keep pumping out those takes, guys.

3. Clay Travis calls Steve Kerr sitting players “indefensible”: We’ve seen plenty of hot takes on resting NBA players before, but Travis delivered one of the hottest yet earlier this week:

“It was absurd, it was ridiculous, it was indefensible.” And he then goes on to say “I’m of the belief that the NBA regular season doesn’t matter at all.” Which is it? Around 1:45, too, Travis makes an argument that because he can fly and then do television, there’s clearly no rest needed for professional athletes. Because those things are so similar. Great takes here, C’lay.

2. Jason McIntyre goes in on “Worst Dad at the NCAA tournament”: There’s a fun way to write about the VCU fan who watched the game and led cheers while his baby was sleeping; Andrew Joseph of For The Win, a USA Today sister site to McIntyre’s The Big Lead, demonstrated that nicely with a piece titled “VCU fan enthusiastically cheered on the Rams while holding a sleeping baby.” But over at TBL, McIntyre decided to use this moment to dispense unasked-for parenting advice and put on his judicial robes, delivering the takes with a piece titled “Worst Dad at the NCAA Tournament Leads VCU Cheers With Passed-Out Kid in His Arms“:

Look at this meatball. He’s leading cheers for VCU against St. Mary’s while he’s got his young kid passed out in his arms. Imagine screaming at the top of your lungs – with 10,000 others – with a little kid asleep in your arms.

This dad also brings his kid to the first showing of the new Marvel movie at midnight because he just has to be there.

That’s it, that’s the entirety of the post. Look at this meatball dispensing parental judgement. It’s a good thing McIntyre got ‘low seven figures” for his skills in producing content like that. The number-one source for unresearched judgey parental advice on the internet! Also, it should be noted that the baby in question is a daughter; McIntyre’s URL still indicates “son,” but his title’s now changed to “kid.”) And she was having plenty of fun at the game before getting tired. But sure, Jason, presume that taking a kid to a sporting event is a terrible idea just because the kid might get tired and go to sleep. Good logic there.

1. Stephen A. Smith blames Jim Boeheim’s Greensboro comments for Syracuse’s NCAA tournament exclusion: There’s been plenty of discussion about if Syracuse deserved a NCAA tournament spot or not, and there are cases to be made both ways, but the most absurd take on the Orange comes from Stephen A. Smith. On ESPN’s First Take Monday, Smith attributed Syracuse’s absence not to their 18-14 record, their 2-11 road record, or their losses to teams outside the RPI top 100 (factors selection committee chair Mark Hollis actually cited), but rather to head coach Jim Boeheim’s comments that the ACC is better off playing their conference tournament in big media markets rather than smaller cities like Greensboro (where, for all the problems with how he said it, he actually has a point). Here’s what Smith said:

“We all want to act like aesthetics don’t matter, but when you talk junk about a host city like Jim Boeheim talked about Greensboro, that’s going to ruffle some people’s feathers. They’re not inclined, when you alienate Joe Public, they’re not inclined to give you the benefit of the doubt. Jim Boeheim, who I am very fond of, I like him a lot, he’s had a rough couple of years.”

Smith goes on to say that people once talked about Boeheim just in terms of wins and losses, but now he’s in the news for other things. He’s then reminded that Syracuse went to the Final Four last year, but says his “rough couple of years” comment wasn’t about wins and losses. But it’s the blaming of Boeheim’s comments for Syracuse’s omission that’s really ridiculous. Of all the many and varied metrics used in NCAA tournament selection, it seems highly unlikely that “comments about Greensboro” is one.

Honorable mention: Skip Bayless on a billion dollar shoe deal for LaVar Ball’s sons not being out of the question.

People in Portland and New York City will have the option to listen to their local radio broadcast of the MLS Cup final.

"I thought 'I just did this [quarantine/bubble] for three weeks, I cannot do it again. It's not good for me to do again.' And I'm going to hate not doing it, in particular if the NHL guys go, I'm going to hate it. I'm going to feel like I missed out. But I just couldn't do it."

"My contract is up, but we’re still talking about the future and a couple of other things are out there. I, at this moment in time, hope to be doing games next year."

"I think the COVID protocols have taken care of any answer that you could conjure up for this year."

People in Portland and New York City will have the option to listen to their local radio broadcast of the MLS Cup final.

"I thought 'I just did this [quarantine/bubble] for three weeks, I cannot do it again. It's not good for me to do again.' And I'm going to hate not doing it, in particular if the NHL guys go, I'm going to hate it. I'm going to feel like I missed out. But I just couldn't do it."

"My contract is up, but we’re still talking about the future and a couple of other things are out there. I, at this moment in time, hope to be doing games next year."

"I think the COVID protocols have taken care of any answer that you could conjure up for this year."