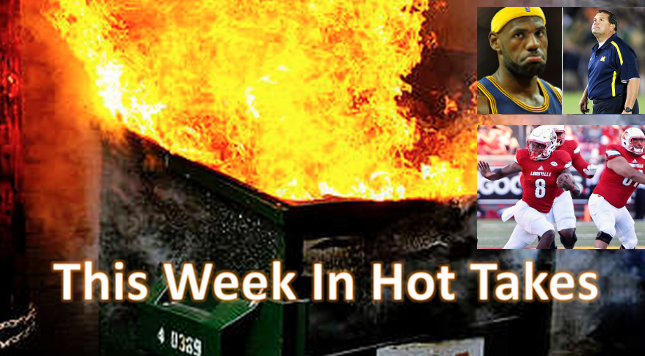 Welcome to another edition of This Week In Hot Takes, a carefully-curated selection of the finest offerings from sports media’s hot takes kitchen. Caution: this week’s takes, artisanally plucked from the week of Dec. 9-15, are extremely hot, so be careful not to burn yourself while reading.

5. Luke Kerr-Dineen thinks the Cowboys should bench Dak Prescott: Remember all the stories we saw last month about Dallas Cowboys’ quarterback Dak Prescott as MVP candidate? Well, that may have been somewhat overblown, especially given that Prescott has only thrown for 300+ yards twice this season (and hadn’t at all when that first story was written), but even Tony Romo gave a “Dak has earned the right to be our QB” speech last month.

Now, after two average games (less than 200 yards passing, but with completion percentages of 70.8 per cent and 66.7 per cent and a touchdown to no interceptions in both, with both also resulting in wins) and one poor game (165 passing yards with a 45.9 per cent completion rate, one touchdown and two interceptions in Sunday’s 10-7 loss to the Giants), For The Win’s Luke Kerr-Dineen wants to reignite the quarterback controversy in Dallas and bench Prescott in favor of Romo. In fact, Kerr-Dineen argues that they should have done so as soon as Romo was healthy:

It has nothing to do with Prescott’s disappointing two-interception performance on Sunday night in his team’s 10-7 loss to the Giants, or anything in the weeks that preceded it. I’ve written repeatedly that Romo should’ve been handed the reigns [sic] the moment he was healthy-enough to handle them, and I maintain that would’ve been the best decision for the franchise. Dak, for as impressive as he’s been, isn’t benefiting from anything that wouldn’t have also made Romo better.

But even if you’re fully embedded on Team Prescott, sitting the rookie quarterback for a few weeks is still the best option for the Cowboys.

…Let’s say the Cowboys, for some reason, decide to keep playing Prescott. Maybe he wins his final three games and adds a smidgen more confidence to his overflowing bucket; there’s no way the upside of that is worth the risk of Prescott getting injured, or to risk his red-hot hand cooling off at exactly the wrong time. The last thing you want, amid all the tension of the playoffs, is your own fans piling-onto your rookie quarterback.

Really, your fans are going to pile on your rookie quarterback less after he’s been pulled for the guy who admitted he deserved to keep his job? That’s quite the hot take. Absolutely, if Prescott continues to struggle, going to Romo might make sense for the Cowboys; even Jerry Jones has said that could happen, but only if something “you’ll know when you see it” happens. That hasn’t happened yet, and Kerr-Dineen’s argument seems less logical and more about restating his entrenched position on Team Romo. The best part is that For The Win ran this immediately after another article from Andrew Joseph  mocking Cowboys’ fans on Twitter who called for Prescott’s benching at this point:

That’s quite the back to back tweets there, For The Win. Of course, that does happen; different writers at a site can have different opinions, and our #EmbraceDebate world often rewards that. Joseph’s piece seems a lot more reasonable than Kerr-Dineen’s hot take at this point, though.

4. Tony Kornheiser calls Cavs resting players “a disgrace” and “a worthless ticket”: The Cleveland Cavaliers’ decision to rest LeBron James, Kyrie Irving and Kevin Love against the Memphis Grizzlies Wednesday was logical, considering that they’d just played a physically punishing game against the same team the night before and that this game really didn’t matter that much in the larger scheme to the Cavs. However, it produced quite a lot of hot takes from people ranting about how the Cavs were somehow cheating fans. This Michael McCarthy column at The Sporting News includes hot takes from Stephen A. Smith and McCarthy himself, but the hottest is the one McCarthy includes from Kornheiser:

The decision is a “disgrace,” Kornheiser said angrily and repeatedly on Wednesday’s episode of “Pardon the Interruption.”

“This is a disgrace. There’s only two teams that you buy a season ticket for. You buy it for Golden State. And you buy it for Cleveland,” said Kornheiser. “Cleveland goes into Memphis one time. And none of these players is going to be there?”

Kornheiser wants the NBA to fine Cavs coach Tyronn Lue, general manager David Griffin, owner Dan Gilbert and even King James himself. As precedent, he pointed to the NBA fining Spurs coach Gregg Popovich $250,000 for resting four of his starters before a nationally televised game against James’ Heat in 2012.

“This ticket is worthless,” declared Kornheiser. “If you’re in Memphis, this is a worthless ticket.”

A worthless ticket, eh? You don’t think that fans in Memphis might be paying to watch their team, not just LeBron James? And the Cavs’ decision actually worked out great for Memphis; the Grizzlies lost 103-86 in Cleveland Tuesday, but beat the shorthanded Cavs 93-85 Wednesday, and that’s a win that means much more them, as they’re battling for positioning in the tough Western Conference.  Sure, some fans will be upset about not getting to see LeBron in person, but resting players is smart and permitted, and it’s far from a “disgrace”; it’s not the Cavaliers’ job to do what’s best for road fans.

Every sports ticket comes with no guarantee of seeing a particular player, whether thanks to injury or rest, and that’s the same with theater tickets; yes, on some nights, parts are played by understudies. Resting players in the second game of a back-to-back series is common in baseball and hockey (for goalies, at least). NFL teams rest tons of players once they’ve clinched playoff position, too, and the Cavs’ status in the East means they don’t need to worry about playoff positioning too much, especially at this point. Resting their stars, especially the aging LeBron, for the second straight game against an extremely physical team, is hardly a disgrace. It’s a move that made sense for Cleveland and one that helped Memphis. And there probably are plenty of Grizzlies fans who got to see their team win Wednesday and didn’t find that ticket “worthless.”

3. Shannon Sharpe thinks Bobby Petrino should be fired if he knew about #WakeyLeaks, compares it to actual espionage:

"If this is true… [Bobby Petrino] should be fired."—@ShannonSharpe on Wake Forest's announcer allegedly leaking game plans to Louisville pic.twitter.com/RvWQBofqIf

Yes, there are plenty of questions about what Louisville head coach Bobby Petrino knew or didn’t know about the #WakeyLeaks saga, and yes, there’s the possibility of some punishment for Petrino, but firing him over this? That seems ridiculous at this point, where all we know is that the Cardinals’ OC received a call from Wake Forest radio analyst Tommy Elrod and got information on a few specific plays, which was then shared with the defensive staff. We don’t even have proof Petrino knew at this point (although it seems unlikely he wouldn’t). It’s a scandal, and one that could lead to some punishment, but it hardly seems like a fireable offense for the head coach on the receiving end, and Sharpe’s comparison of this to actual international espionage is so hot it can’t be touched.

2. Jason Whitlock thinks Michigan should bring back Brady Hoke: The ideal candidate for Michigan if Jim Harbaugh somehow did leave for the Rams (probably not happening, as that was mostly a rumor irresponsibly started by Whitlock’s Fox colleague Colin Cowherd)? How about the guy they fired before bringing in Harbaugh?

If Harbaugh leaves Michigan, smart move would be to bring Hoke back. #HisPlayers

This is idiotic even by Whitlock’s standards. Hoke went just 31-20 at Michigan, never passed eight wins after his first season, went 5-7 in the 2014 campaign that got him fired, and spent this past year coordinating a dismal Oregon defense that allowed 42.6 points per game, 126th out of 128 FBS teams (ahead of only Texas State and Texas Tech). Hoke was a big part of the reason why the Ducks slumped from 9-4 to 4-8, and new head coach Willie Taggart not only made sure not to retain him (hiring Jim Leavitt instead), but also mocked him during his introductory press conference. Oh, and the school president made fun of Hoke too. Yep, that’s the guy you should hire, Whitlock. (The replies to Whitlock’s tweet are great, by the way.)

But hey, Hoke coached at Ball State, where Whitlock lettered for two seasons as an offensive lineman. He’ll happily keep citing that as proof that he, the man who just suggested that Hoke’s disastrous year as a DC not only deserves another Power Five head coaching job, but deserves one at the school that ran him out of town on a rail, knows more about football than you.

1. Stephen A. Smith’s take on #WakeyLeaks is that it could hurt Lamar Jackson’s reputation:

This is even more absurd than the #WakeyLeaks take above. Petrino could conceivably be punished for this, but involving Jackson, the Cardinals’ Heisman Trophy-winning quarterback, seems utterly ridiculous. As Max Kellerman points out, players aren’t even usually told where information comes from, so if Louisville did receive information on Wake’s defensive schemes, how would Jackson know that wasn’t from film study? And what would he be supposed to do even if he did know something was wrong? And this is ignoring that the suggestion so far is that the shared information was on the other side of the ball entirely, with Elrod giving Louisville’s defense information about Wake Forest’s offense, not the reverse. Bringing Jackson into this is the ultimate in free association: “Hey, this involves Louisville, and we were just talking about a Louisville player!” It’s a burning-hot take, but one with no logic behind it.