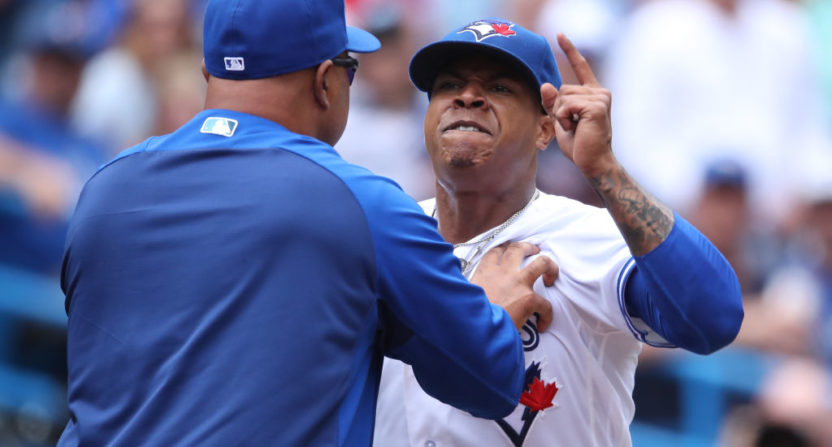 Hot microphones have led to plenty of awkward and/or profane comments by sports broadcasters being spread to the world over the years, ranging from “She died like a pig” to “They’re gonna keep kneeling as long as they have cameras right in their face” to “He’s stupid as fuck.”

Baseball’s perhaps been particularly notable for this, with Dan O’Dowd saying “Tell John Smoltz to go fuck himself” in 2015 and Keith Hernandez saying Tanner Roark was “getting his tits lit” earlier this year.

The latest example isn’t quite as spectacular, but it does involve Toronto Blue Jays’ broadcasters Buck Martinez (seen at right above) and Pat Tabler (seen at left above) offering some criticisms of Jays’ pitcher Marcus Stroman following an almost-brawl Tuesday night against the White Sox where Stroman and Chicago shortstop Tim Anderson argued and the benches cleared:

So, uh, I guess the audio cut out for those watching on Sportsnet, and Buck and Pat didn't realize their mics were still hot on MLB dot TV. pic.twitter.com/pXmUSEp8kl

Buck, on Stroman: "He just can't help himself. He just had to holler back over at the White Sox."

That’s really not that bad of a comment compared to others we’ve seen broadcast, but that is interesting criticism from a team broadcaster, especially a pair in Martinez and Tabler that often aren’t too hard on their team’s players. (They were 21st in our local broadcaster rankings this year.) For what it’s worth, Anderson had criticisms to lob at Stroman afterwards too:

“Just the way he carried himself, I felt like I felt disrespected,” Anderson said. “I had to do what I had to do. Just, when I stepped out when he was going slowly, he said a few words. I kind of let it go, and then after he struck me out, he mumbled something else.

“He’s going to try to throw me off, so why not step out and try to throw him off. It was one of those things, I stepped out and he just complains and cries like he always does. That’s what it led to.”

Yes, Stroman has been involved in plenty of tense situations before, including getting tossed in his previous start (along with manager John Gibbons and catcher Russell Martin) over strike zone complaints, and yes, he played a role in this one. For his part, Stroman blamed Anderson for instigating this confrontation:

“It seemed like he wanted to talk the entire way back to the dugout after striking out. I got the ball back from (Josh) Donaldson after throwing the ball around, and he was still continuing to talk, so I asked him what he was saying. He continued to talk more, so I walked toward the dugout. I thought he had a problem. I don’t understand why he would be running his mouth walking back to the dugout. It made zero sense to me.”

The criticism from Martinez and Tabler may wind up creating more drama than anything Anderson said, though. We’ve seen plenty of players unhappy with criticism from local broadcasters recently, most notably Boston Red Sox pitcher David Price’s feud with analyst Dennis Eckersley, and it’s possible this could turn into something similar, even with Martinez and Tabler not initially intending to broadcast their comments. We’ll see how this develops, but it’s yet one more reason to be careful around a hot mic.