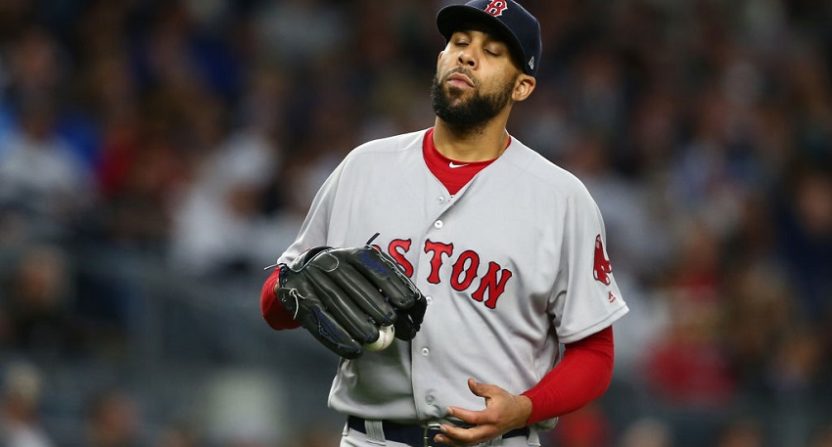 Last week, we learned some of the ugly details from the confrontation between Boston Red Sox pitcher David Price and NESN broadcaster Dennis Eckersley on a recent team flight. Price, presumably speaking for many of his teammates, was unhappy about Eckersley’s on-air criticism of the team, particularly a remark made about Eduardo Rodriguez’s performance during a rehab assignment.

Boston Globe columnist Dan Shaughnessy reported what happened, based on what he’d been told by several sources.

On the day of the episode, Price was standing near the middle of the team aircraft, surrounded by fellow players, waiting for Eckersley. When Eckersley approached, on his way to the back of the plane (Sox broadcasters traditionally sit in the rear of the aircraft), a grandstanding Price stood in front of Eckersley and shouted, “Here he is — the greatest pitcher who ever lived! This game is easy for him!”

When a stunned Eckersley tried to speak, Price shot back with “Get the [expletive] out of here!”

Since that report, the Red Sox have been trying to address the situation, talking to Price about his conduct and attempting to reach out to Eckersley. Yet Price has not apologized to Eckersley and Boston manager John Farrell told reporters that he had made no such effort himself, insisting that the team had “moved on.”

Now on the disabled list with an elbow injury (and Eckersley in Cooperstown for the Baseball Hall of Fame’s annual induction ceremony), Price finally talked to the press about the Eckersley confrontation on Saturday. The left-hander acknowledged that he could have handled the situation better and said he would talk to Eckersley at some point.

From the Boston Globe‘s Alex Speier:

“We’ll definitely talk it out… When he’s around we’ll speak face to face. I’m sure you all will hear about what’s said. That’s the way it goes,” Price said of Eckersley, who is in Cooperstown this weekend for Hall of Fame ceremonies. “I could have handled it probably a different way, but ever since that’s happened, he’s been really good. He’s said a lot of positive stuff about everybody in this clubhouse. This is one band, one sound. We’ve got to have everybody on board. That’s that.”

Obviously missing from those remarks was any sort of apology, but maybe Price is saving that for when he meets with Eckersley. However, Price seems to think that he accomplished his objective by confronting the broadcaster, getting him to back off from negative criticism of the team.

Despite Eckersley’s accomplishments and Hall of Fame credentials, Price seems to think that being part of the media is equivalent to serving in public relations for the team, “everybody on board.” Never mind that Eckersley was once an elite pitcher, and his job is to provide commentary. Viewers surely appreciate a broadcaster who calls what he sees and doesn’t try to put a good face on bad play for the team.

Another issue, according to Price, is that Eckersley has never taken the time to get to know the players in the clubhouse. And though Price didn’t say so, it’s likely that he also thinks Eckersley should make appearances to take responsibility for any critical remarks he said on a broadcast.

“If Eck was around, he’d know who we are. He’s never in the clubhouse. Mr. [Jerry] Remy is always in here. Dave O’Brien is always around. Mr. [Mike] Timlin, on the road trip, always in the clubhouse. [Eckersley is] the one guy I’ve seen in my carerer that doesn’t ever show his face in the clubhouse. There’s a reason behind that,” said Price. “If you’re going to say what he says, you know, come around. Just show your face. And if guys have a problem with it, they’ll pull him aside. Be like, that ain’t how it’s done. This is not the first time this has happened here regarding Eck. It’s unfortunate that it happened and it did and we’re going to get through it.”

This is a legitimate criticism from Price, and if he’d have said that from the beginning — in addition to refraining from mocking Eckersley and yelling profanities on the team plane — maybe people would see this more from his side and public opinion might be more in his favor. Sports columnists who write tough pieces criticizing players earn a lot more respect if they show their face in the locker room the next day. (Those who don’t are derided as cowardly.) The same applies to broadcasters.

However, Eckersley may have felt that his achievements absolved him from having to answer for what he said. His career backs up his remarks. And maybe Eckersley even feels he does a better job if he doesn’t go to the clubhouse to speak with players. Perhaps he feels it helps him be more objective. Maybe Eckersley can answer that himself if he speaks with the media (and, of course, with Price) about what’s occurred.

Yet most people likely understand that his role is not to be a cheerleader for the Boston Red Sox. Apparently, that’s news to many thin-skinned players in the Red Sox clubhouse.