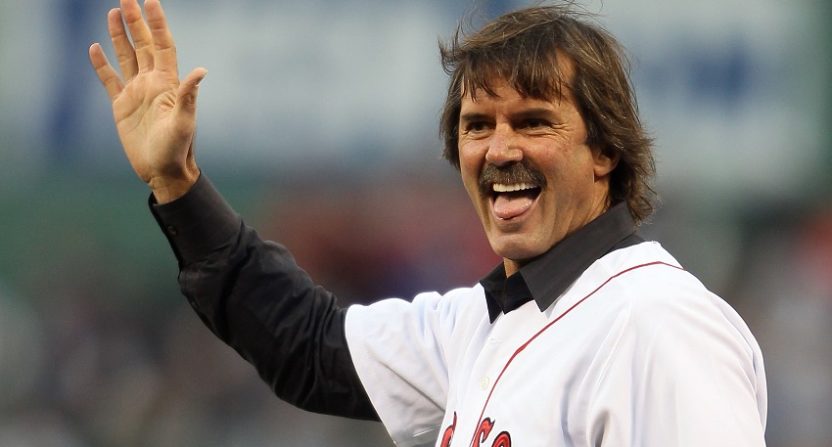 Approximately three weeks ago, Boston Red Sox pitcher David Price reportedly had a confrontation with NESN broadcaster Dennis Eckersley on a team flight. Price had a rather tumultuous June with Boston media, also getting into a dispute with CSNNE’s Evan Drellich and the Boston Herald‘s Steve Buckley.

During the team’s series in Anaheim this past weekend, Boston Globe columnist Dan Shaughnessy spoke to several sources who had witnessed the Price-Eckersley confrontation and gave him an account of what happened. Apparently, the Red Sox clubhouse had been grumbling about Eckersley’s critical commentary for a while.

Shaughnessy recounts an incident between Jackie Bradley Jr. and Eckersley two years ago, in which the outfielder deliberately tried to embarrass Eckersley. But Price had finally had enough when Eckersley said “Yuck” as NESN graphics showed the stats from Eduardo Rodriguez’s June 29 rehab start with Pawtucket. The pitcher decided to call out Eckersley as he boarded the team flight.

On the day of the episode, Price was standing near the middle of the team aircraft, surrounded by fellow players, waiting for Eckersley. When Eckersley approached, on his way to the back of the plane (Sox broadcasters traditionally sit in the rear of the aircraft), a grandstanding Price stood in front of Eckersley and shouted, “Here he is — the greatest pitcher who ever lived! This game is easy for him!”

When a stunned Eckersley tried to speak, Price shot back with “Get the [expletive] out of here!”

So much for earning respect from current players based on a Hall of Fame career. Price’s Red Sox teammates applauded him confronting Eckersley, and some might praise him for defending one of his younger teammates. But why are the players so sensitive about what Eckersley is saying in the broadcast booth? Do they think a former player should understand what they’re going through more than a commentator or fan who didn’t play? Do they believe that the team broadcasts should basically be public relations and say everything is awesome?

What’s particularly surprising is Price showing a side of himself that he never did in Tampa Bay or Detroit. To be fair, the media and team broadcasts in those cities isn’t known for being notably critical of players. So the mindset of the Boston media and the scrutiny that the Red Sox face has probably been a different experience for him.

Did the Red Sox — notably general manager Dave Dombrowski or manager John Farrell — talk to Price about confronting Eckersley? Did the team speak to Eckersley about some of his commentary that upset some of the players? If so, the press didn’t receive any word of it.

According to Boston Globe columnist Dan Shaughnessy, such conversations haven’t taken place. Eckersley hasn’t received an apology from Price or Farrell, though team officials — including team chairman Tom Werner, CEO Sam Kennedy, and Dombrowski — have met with the Hall of Famer or reached out in an effort to settle hostilities. Farrell, in vernacular typical of anyone who just wants to sweep controversy under the rug, said the team has moved on and is focused on winning games.

In the meantime, Eckersley won’t be traveling with the team (something he didn’t like doing anyway) and the Red Sox have been boarding the broadcast crew onto the team’s charter flight before the players arrive. And if Boston continues to lead the AL East, maybe there will be just a bit less tension on those flights.