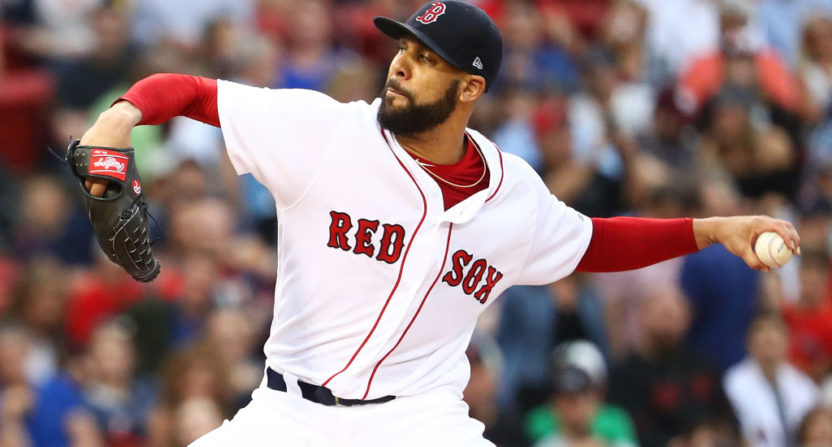 It appears that Boston Red Sox pitcher David Price has been in another confrontation with the media, this time with NESN analyst Dennis Eckersley. This would be Price’s second flare-up with local media in a month, as he earlier told The Boston Globe‘s Dan Shaughnessy he wouldn’t speak to reporters on off days and then confronted CSNNE’s Evan Drellich and The Boston Herald‘s Steve Buckley. This time around, Price reportedly got into a verbal confrontation with Eckersley on the team flight from Boston to Toronto Thursday, as per Nick Cafardo of The Boston Globe:

A verbal confrontation Thursday night between David Price and Hall of Famer Dennis Eckersley on the Red Sox team flight from Boston to Toronto has been confirmed by team sources.

Eckersley, an analyst for NESN, was asked about the incident before Friday’s game against Toronto, but would not comment. A similar no comment came from president of baseball operations Dave Dombrowski and team president Sam Kennedy, both of whom are trying to deal with the incident in-house.

The Red Sox are disturbed by the second such incident between Price and a media member.

Price had just pitched well in a 6-3 win over the Twins, going seven innings with his fastball touching 97 miles per hour and no signs of the split fingernail or blister issue that had developed in his previous start. But apparently something didn’t sit well with him. Eckersley seemed glowing in his analysis of Price’s outing, but it was not known whether it was something that was said during that broadcast or from a prior analysis. Eckersley also appears on the Red Sox’ pregame and postgame shows.

We’ll see what develops here, but this doesn’t seem to bode well for Price’s relationship with the Boston media, especially considering what happened with Drellich and Buckley earlier this month. And it’s curious that he would choose to argue with Eckersley, the Hall of Fame pitcher who seems pretty well-respected as an analyst. It also may not bode well for the length of Price’s time in Boston, which saw plenty of criticism even before these media confrontations.

Taking up issues with reporters’ or analysts’ pieces or comments is one thing, but doing so in a public and confrontational manner isn’t a great approach. Doing so multiple times in a month is worrying, too. If the Globe‘s report is accurate, it doesn’t make Price look good, and it raises some questions about his future with the team.