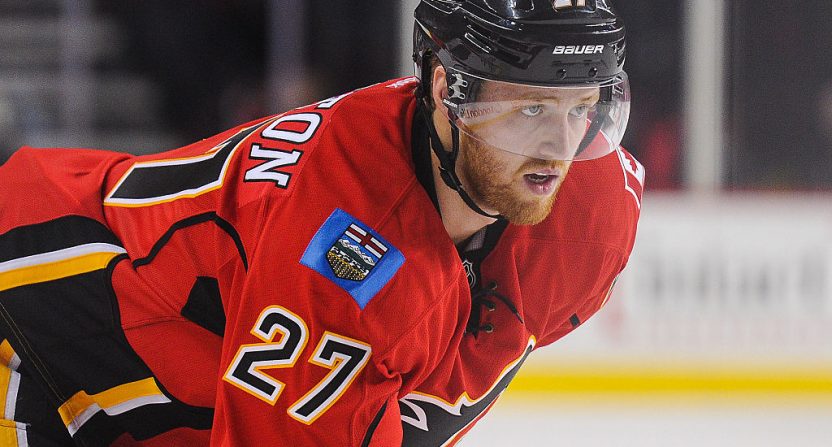 Ah, the perils of hot mics. Microphones that were on when interview subjects thought they were off have caused problems for everyone from Robert Durst to Dave Bliss in the wider world, and in the sports media world, everyone from Jim Nantz to Byron McDonald has been tripped up by them. The case of the profane rant about Calgary Flames’ defenseman Dougie Hamilton that appears to have come from the Sportsnet broadcast booth (which provided coverage for both Sportsnet and NBCSN) Saturday night is perhaps particularly interesting, though, as we don’t yet know just who delivered it. Here’s the audio (language warning):

Voice one: “If you don’t rip Dougie Hamilton, I will. Stupidest fucking penalty you can take.”

Voice two: “Well, how about the T.J. Brodie one too? But you’re right, that Dougie Hamilton one.”

Voice one: “Does he have a fucking brain? He doesn’t. He’s stupid.”

Voice two: “I don’t know him that well.”

Voice one: “He’s not an intelligent guy.”

Voice two: “You’re Mr. Flames, so you probably know him better than I do.”

Voice three: “That’s probably their best chance to win here, I think, in this series.”

Voice one: “They’re done. They can’t win four of five.”

So the question is, who are the voices? Voice two appears to be color analyst John Garrett, the long-time WHA and NHL goalie and broadcaster; compare the voice to his infamous 2013 jinxing of a Roberto Luongo shutout.

But Garrett doesn’t say anything objectionable here. It’s only the first voice that does, and his identity isn’t clear. Some might think it’s play-by-play man Rick Ball, who was working the game with Garrett, but it doesn’t really sound like him. Here’s a 2016 clip of Ball calling a Flames’ broadcast for comparison:

Ball’s voice sounds more like the third voice who chimes in late here (although there isn’t enough to be one hundred per cent certain). And the audio levels might give us another clue; voice two and three seem to come in louder than voice one, suggesting perhaps that they’re actually the ones miked up and voice one is just being picked up on their mics. So voice one, the only one who says anything really offensive on this clip, would seem likely to be a behind-the-scenes guy, perhaps a producer, statistician or something else. Voice two refers to him as “Mr. Flames,” so it would seem he’s a Calgary guy, and someone who was important enough to be worth sending to Anaheim for this game.

Other people listed in Sportsnet’s schedule are reporter Roger Millions and digital writer Ryan Dixon, but it isn’t necessarily either of them, as there are plenty of non-listed off-air personnel too. The person here could also be uninvolved in the broadcast; perhaps he’s a print or radio media member who stopped into the TV booth for a chat during a commercial break, or perhaps Garrett stepped out of the booth and was chatting with someone. We’ll see if his identity ever comes to light. In any case, though, this is one more warning to be careful around microphones, whether you think they’re on or not.