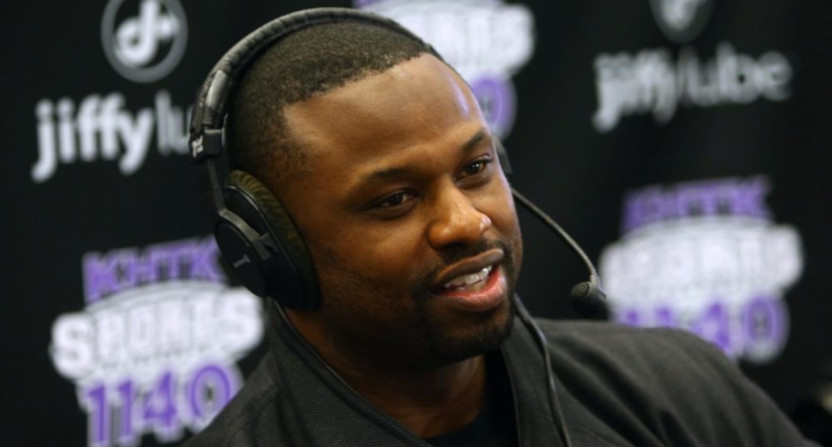 The rivalry between WFAN and 98.7 ESPN New York might amp up a bit shortly thanks to Bart Scott. WFAN regularly beats ESPN New York across most parts of the day, but ESPN NY’s Michael Kay has pulled ahead of WFAN’s Mike Francesa recently in the crucial afternoon drive slot (even under measurements that count Francesa’s streaming, unlike some earlier PR spin from ESPN that didn’t count that). And with Francesa now set to leave drive time (again) at the end of the year, things are a bit in flux at both stations, and that seems to have led to Scott jumping ship from one to the other.

This appears to be quite the interesting move from ESPN NY. Andrew Marchand of The New York Post reported Saturday that Scott (the former New York Jets’ linebacker who first was a WFAN replacement for Francesa alongside Chris Carlin and Maggie Gray, then was moved to the afternoon with them when Francesa suddenly returned, then wound up just on Maggie and Bart after Carlin was forced out in September) is now moving from WFAN to ESPN NY. And that’s notable on a couple of fronts; for one, it means that ESPN NY is going local in the afternoon (they had previously carried Stephen A. Smith’s national show, but Smith is moving off radio as part of his new ESPN deal), for another, it means that Scott will get some national ESPN push (including on TV), and for a third, it leads to further WFAN changes, including Evan Roberts and Joe Benigno likely replacing Francesa in drive-time. Marchand has more on that:

Meanwhile, the duo of Joe Benigno and Evan Roberts has become the favorite to move to afternoons on WFAN and replace Francesa, according to sources. Nothing yet is finalized.

FAN had considered a three-person team, but with Scott intent on leaving, it is likely the station will abandon that idea. FAN had John Jastremski team with Scott and Maggie Gray this week.

…Scott’s new role will also give him prominence on TV, as he will be a football analyst on “Get Up!” and other ESPN shows.

Marchand goes on to note that it’s unclear who Scott will be paired with in this new afternoon role at ESPN NY: it could be Carlin (who did a guest spot on the station after his WFAN firing), but it could also be an internal candidate like Alan Hahn. It should be interesting to see how this all works out, including who winds up with Gray in WFAN afternoons now, how ESPN NY’s venture into local afternoon radio goes, and what this means for the overall state of New York sports radio.