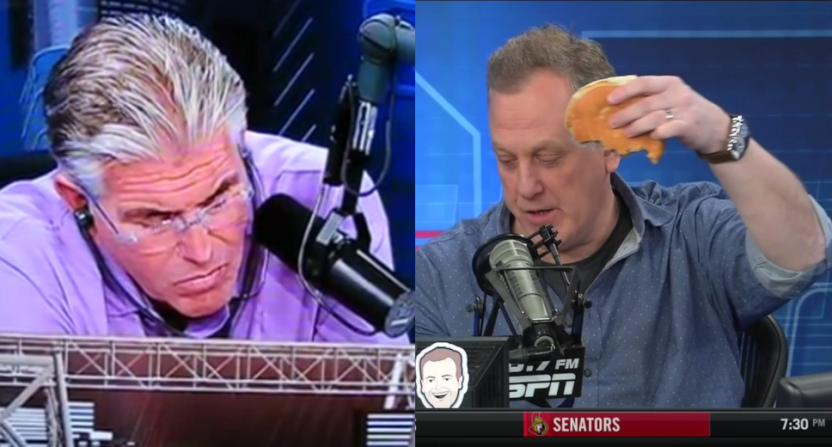 The New York sports radio ratings battle between WFAN’s Mike’s On with Mike Francesa  and ESPN New York’s The Michael Kay Show (which features Kay, Don La Greca and Peter Rosenberg) has taken another interesting twist. When Francesa (seen at left above falling asleep on air in 2012) returned from a short-lived retirement in April 2018, Kay (seen at right above fulfilling a bet by eating a Whopper on-air in June 2018) made some initial gains from where things left off in Francesa’s final month, but still trailed significantly.

The gap’s closed a lot since then, though, with Kay posting some outright month wins in December 2018 and January 2019, and making it close enough in this year’s first two quarterly ratings books that ESPN PR could put out dubious “beats” claims (based on data that counts ESPN’s streaming and excludes WFAN’s streaming). And now, the Nielsen Audio numbers from the first month of the autumn book (Sept. 12 through Oct. 9) are in, and they’re a legitimate win for Kay even with streaming factored in, which has led to headlines like “Mike Francesa ratings disaster is here in uncertain WFAN times” (on a piece from Andrew Marchand of The New York Post):

While there are a lot of developing stories, contract negotiations and potential lineup changes at both WFAN and ESPN New York, the afternoon ratings war is not much of a battle after one month.

Michael Kay’s show crushed Mike Francesa in the first month of the fall book. Kay finished No. 1 overall in the market with a 7.4 share of the audience, according to Nielsen.

Francesa’s number was 5.6. If you included his stream, he moves to 6.0, which still forces him to crank his neck up to see Kay. Overall, Francesa finished third without the stream and in a virtual tie with 106.7 Lite FM for second with it.

It’s worth looking back at how some of the numbers here have changed over time. The numbers there (7.4 and 6.0) are a percentage share of the men aged 25-54 demographic, which is how these ratings have been usually reported. In the 2017 autumn book, Francesa’s last one before his “retirement,” he beat Kay 6.6 to 5.0. In May 2018, Francesa’s first full month back, he won 6.8 to 5.5. (The numbers from May 2018 on are for 3 to 6:30 p.m. Eastern, the hours where Kay and Francesa now go head to head; both shows start at 3 p.m., but Kay’s runs through 7 p.m. while Francesa’s ends at 6:30. These numbers also all count WFAN’s streaming, which ESPN PR tries to discount thanks to it featuring separate ads and being tracked separately by Nielsen.)

The last book of 2018 saw Francesa win 6.4 to 5.8, but in January 2019, Kay edged Francesa 5.8 to 5.7. The first book this year saw Francesa beat Kay 6.2 to 5.9,  and the second one saw Francesa squeak by 6.6 to 6.4. So this fight has regularly been getting closer and closer, and it’s now turned into at least one month with a big and undisputed win for Kay. And that’s particularly interesting considering the uncertainty around Francesa’s future on WFAN, as Neil Best of Newsday writes:

WFAN has not announced plans for its lineup beyond December, but it has been planning for life after Francesa, who could leave afternoon drive time shortly after the end of the book.

If he does, he still is expected to remain with Entercom, WFAN’s parent company, in the form of a presence on its digital arm, Radio.com.

It’s also notable that while a 6.0 share in the station’s target demographic is far from bad, WFAN’s programming has been beating ESPN handily in their other slots. Marchand writes that morning show Boomer and Gio and midday show Joe and Evan both topped this book, and afternoon show Maggie and Bart (the former CMB, now minus Chris Carlin, who WFAN kept from a one-day guest host role with Kay earlier this month) finished second, “so among all of FAN’s daily programs, Francesa is doing the worst.”

That’s a big fall for Francesa, and it’s a big change in the dynamics between him and Kay, who had only beat Francesa in one month (June 2017) before The Sports Pope’s exit and return. And it’s particularly funny considering some of the past trash talk Francesa has sent Kay’s way. Back in 2009, Francesa responded to criticism from Kay with “if you’re gonna come after us, then you gotta bring more than pea shooters,” and in 2014, he called a Diet Coke stunt from Kay and La Greca (part of their show replacing Francesa as a simulcast on YES) “a classless, loser move from two guys I have been burying in the ratings for over a decade.” A lot could still change over the final months of this ratings book, and it’s possible that Francesa could recover and maintain his streak of never losing a full book to Kay, but for the moment, it’s not Kay and company getting buried.

Correction: we initially referred to Kay’s simulcast replacing Francesa’s on SNY. Both simulcasts were/are on YES, not SNY.