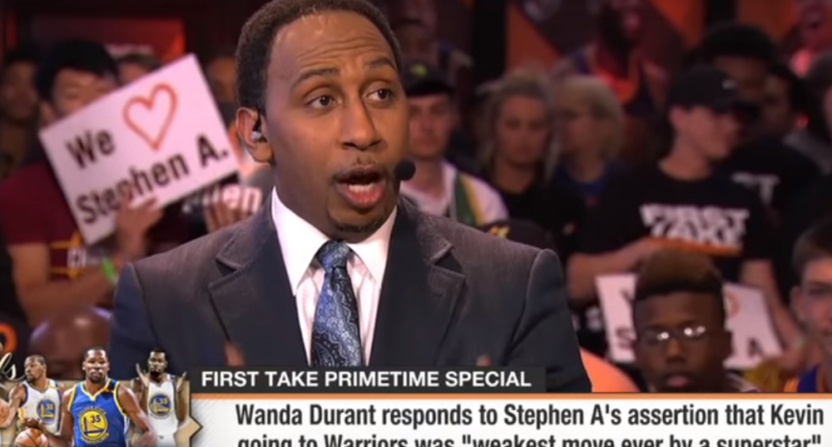 ESPN is keeping Stephen A. Smith around, and they’re paying an incredible amount of money to do so. Andrew Marchand of The New York Post reported Thursday that Smith is all but set for a new five-year contract at ESPN (while “finer points of the contract are not fully completed,” he’s already taking on new roles, including hosting a shortened SportsCenter Wednesdays ahead of NBA games) that will pay him “nearly $8 million” annually, plus some money up front for signing a deal with time still left on his current contract. And James Andrew Miller (of ESPN oral history fame) tweeted Thursday that Smith is getting even more than that:

Ugh, w/all due respect to your reporting prowess, me thinks you be way…way…under. #Northof10 #ESPN https://t.co/HXjM34ii13

That may just be an accounting dispute (Marchand writes that Smith “received some money upfront, making it more worth his while to re-up with a year left on his current deal,” so that then brings in NFL-level discussions of if signing bonuses count towards average annual value), but whatever the actual figure is, it’s very clear that Smith is getting paid a whole lot of money to stick with ESPN. And he’s getting a big raise over what he was previously making, and over the biggest previous reported current salary at ESPN (Mike Greenberg’s $6.5 million).

This extension comes despite all of the waves of criticism for Smith, from John Oliver’s October description of him as “loud, wrong, and tends to take pointlessly dramatic pauses” through the flak he took for “I would remind you that, throughout this world, one of the things that exists is the Israeli-Palestinian conflict” through his many, many blatant factual errors and bashing of his own company’s reporting. And it also comes despite the apparent ending of Smith’s radio show next year, despite Smith’s persistent hot takes (he finished highest in the non-Jason Whitlock division in our three-year chronicling of takes), and despite Smith’s previous discussions of wanting to move to Los Angeles and host a late-night show or “a show on CNN or Fox News.”

Maybe Smith will still get an L.A. move at some point (Lord knows that ESPN’s willing enough to send people from L.A. to Bristol and back when it suits them) and maybe he’ll even get a late-night show. Marchand’s piece notes that ESPN is trying to incorporate Smith into their ESPN+ offerings, and perhaps that’s how they get there. But for the moment, he doesn’t seem headed for CNN or Fox News. Instead, he’ll be sticking at ESPN, which has shown a firm commitment to embracing debate and a lesser commitment to confirming if the players in tonight’s featured matchup are actually playing, or even on the appropriate roster. Where you put your highest-value contract says a lot about your priorities, and for ESPN at the moment, the priority appears to be Stephen A. Smith.