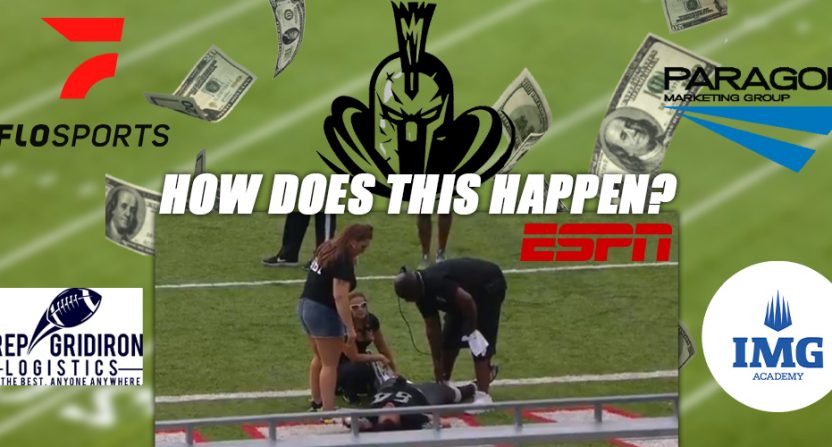 We’ve done an extensive amount of reporting about Bishop Sycamore, the school that played Sunday on ESPN despite a glaring amount of red flags about the school’s origins, operational history, and mounting legal problems. While more information continues to come out about this insane story, one of the biggest questions we’ve been looking into is just how exactly are these games booked and who benefits financially?

A refresher from our earlier article:

While most gravitated to this story because Bishop Sycamore ended up on ESPN, the network has been quick to point out that the games are booked by Paragon Marketing, a company that handles a large portfolio of high school events for ESPN. Paragon Marketing and their CEO Rashid Ghazi have increasingly owned the game’s booking of late, seemingly in an effort in an effort to shield ESPN from blame to help preserve that business relationship.

But despite Paragon owning a lot of the blame here, ultimately they say they are not responsible for booking the game. They say they merely decided to broadcast the game after it was scheduled. And they say that Prep Gridiron Logistics recommended Bishop Sycamore for that game. From our feature yesterday:

Our article highlighted how PGL was run by New Jersey native Joe Maimone, and that the company had announced a four-year deal with streaming service FloSports earlier this year. FloSports would go on to tell us the following in light of the Bishop Sycamore IMG disaster:

“In light of recent developments regarding Bishop Sycamore, we have decided to pull their upcoming games from our programming schedule until questions concerning the integrity of the program are resolved. We have addressed our concern with Prep Gridiron Logistics, which licensed the games to us, and they have agreed to take necessary measures to avoid incidents like this in the future.”

In that post, we cited a few message board posts made by Jersey Flyer, an account claiming Prep Gridiron Logistics affiliation, and one that seems likely to be operated by Maimone (AA has seen multiple documents suggesting this is Maimone, but hasn’t been able to completely confirm that). Over the last 24 hours, AA has dug into the message board history of Jersey Flyer, and was shocked to find hundreds of posts detailing his plans with Bishop Sycamore, his relationship with FloSports, how his business model works, and the contractual obligations the schools had with PGL.

Below, we will tell how this fiasco played out on Yappi.com, which is a statewide high school football forum for the state of Ohio with high levels of engagement. It has more than 78,000 registered accounts on the site, with posters from all corners of Ohio. Given this thread is public and we view the dozens of posters who tried to stop this embarrassment from happening as message board heroes (an extreme rarity in society), and posters are posting with aliases, we’ve included their posting name in the screenshots, but will gladly remove if them if individuals reach out.

Get comfortable, as this is certainly a wild ride to which I’ll mainly just be your tour guide. Note that we realize these screengrabs are not great on the eyes, and we will be replacing them shortly with better versions.

The video which universally gets denounced given the known history of Roy Johnson, is now deleted. After 22 posts on the subject, Jersey Flyer posts for his first time in the thread. Let’s get started.

When someone points out that the program is run by Roy Johnson (but named in the post as LeRoy Johnson), Jersey Flyer doesn’t make the connection and begins to lean heavily on the fact the Bishop Sycamore will be on ESPN.

Not long after, Johnson’s legal issues are pointed out to Jersey Flyer.

The reaction to learning about Johnson’s legal history is certainly something.

But maybe authorities will care in the very progressive state of Ohio?

When pressed later on why Jersey Flyer is moving forward with Johnson steering the program, we get some clues to the financial upside.

Say more about that?

Oh, so you’ve done this before, and you make a lot of money doing it. Any chance you can share more about that?

What happened with that one miss? 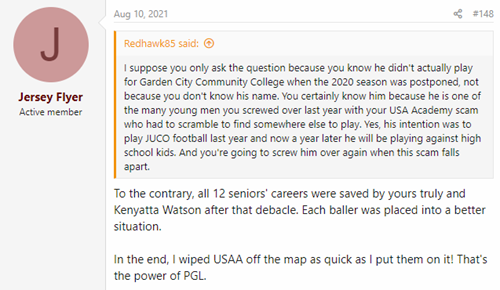 Always good to pat yourself on the back for administering first aid to someone you stabbed. Anyway, what is the PGL business model? 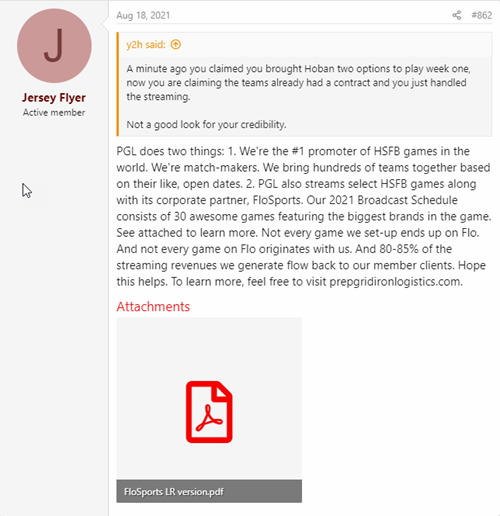 Can you spell it out for us a bit more?

Explain it to me like I’m a really shady person who actually wants to replicate what you’re doing because I have no morals. 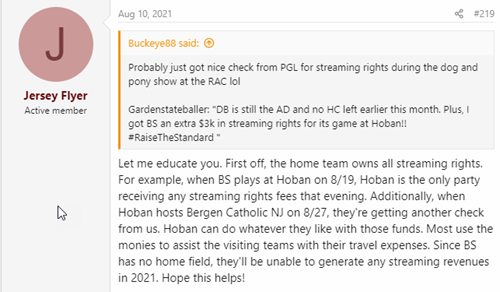 So just to be clear, who holds the streaming rights to these games?

And how much are these travel expenses that would go to Bishop Sycamore, who has stiffed numerous travel companies?

And how much money could this whole FloSports deal be worth? The press release said the following:

“PGL is extremely excited and honored to be making high school football history with our new corporate partner, FloSports,” said Joe Maimone, Managing Member of Prep Gridiron Logistics. “Over the next four years PGL will be infusing a minimum of $500,000 into the game of high school football.”

What we seem to reasonably be able to discern at this point between these statements and the stated press release is that there’s some type of revenue sharing based on subscriptions to FloSports that are sold for these games. Throughout this discussion, Jersey Flyer puts in Flo Sports links (similar to what PGL has done on Twitter), seemingly trying to drive subscriptions. 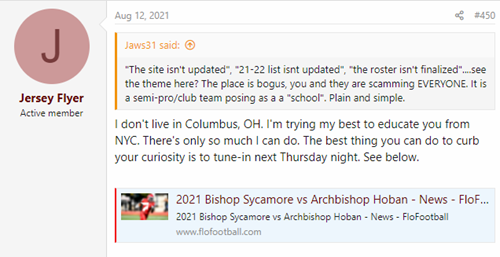 The various message board posters did not seem interested in buying a sub. 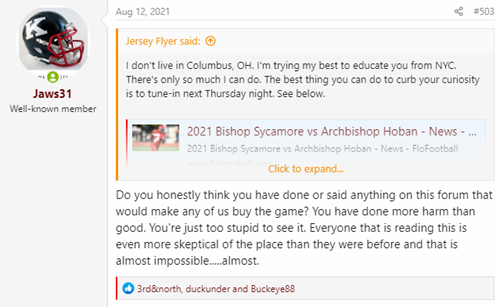 But maybe, nonetheless, this is working?

Let’s step away from the specifics on the money for a minute. Message board posters were extremely vocal trying to prove Bishop Sycamore was a fraud, with a large part of that being that they used players that were not of high school age. They were also disputing how many players and teams Bishop Sycamore actually had, as well as the facilities the kids played and stayed in. Regarding the facilities, here’s what Jersey Flyer said:

And you’ve actually seen this?

This is one of my favorites. 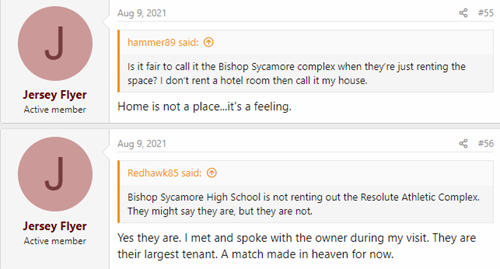 How many players are there at these awesome facilities?

Kind of sounds like you want to be IMG, no?

Is the education as good as IMG?

And how essential are you to all of this?

Ryan Day must be impressed. 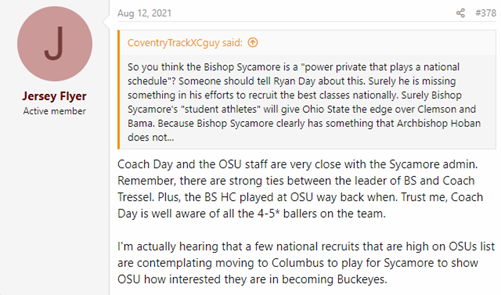 But even in a podcast, Coach Roy Johnson paints a very different picture.

Is there any chance you’re not telling the truth?

That’s because he can’t lie because of his faith!

But despite the inability to lie, a lot of discrepancies were pointed out regarding roster size, quality of the roster, and the age of the players. 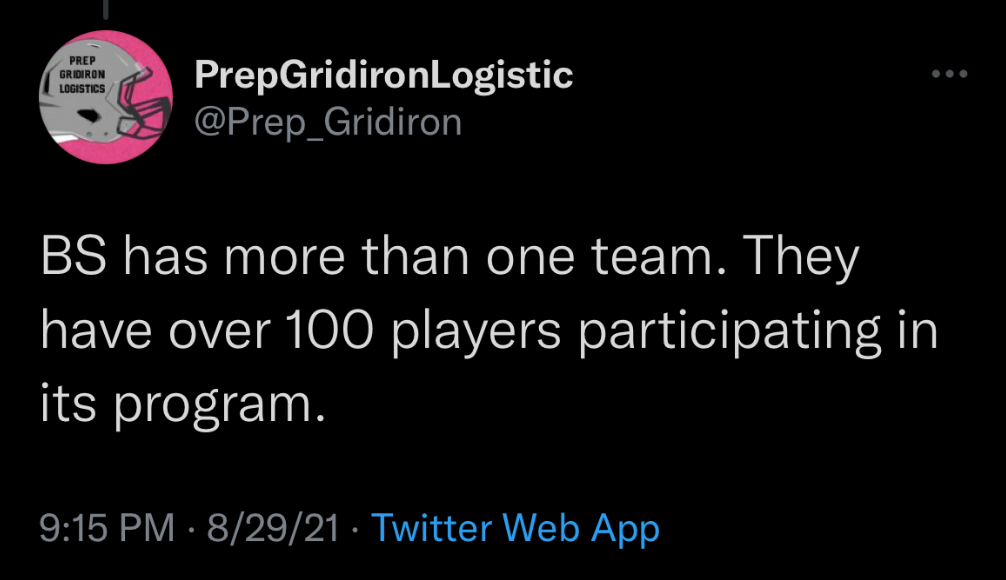 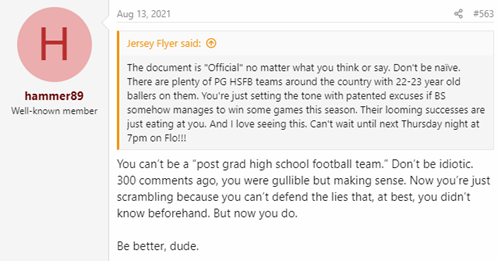 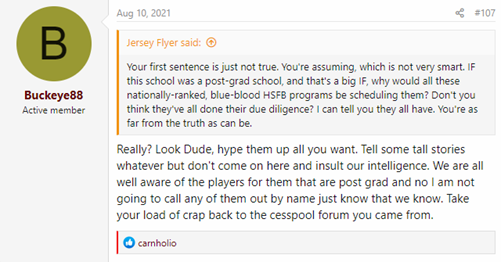 It’s just not his job to check into these things you see.

A criminal record AND being too old?

Meanwhile a desperate search for players…

So why are schools scheduling Bishop Sycamore? 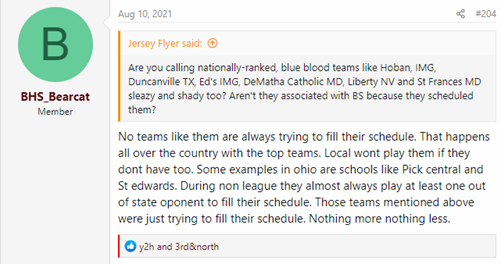 And does anyone check on any of the scheduling quality, given this is going to be on TV sometimes? 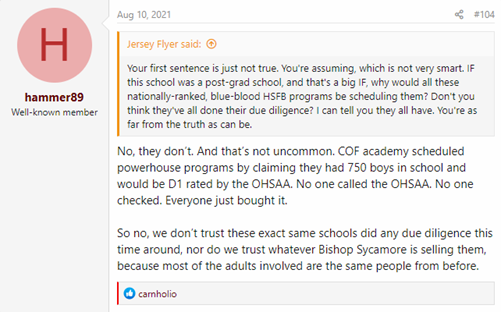 ESPN is apparently too woke to cancel the game.

But why do opponents go through with it? 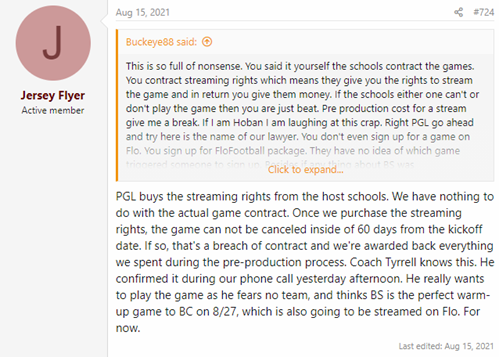 Are the schools informed (we confirmed they were in earlier reporting)?

Is there anything in the contracts with the schools that isn’t on the up and up? 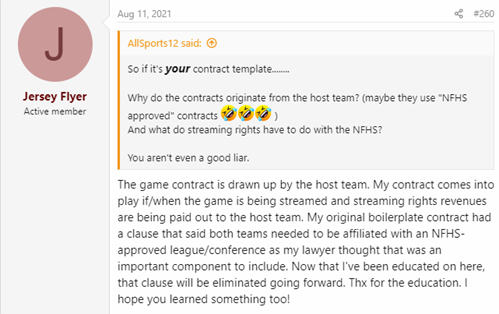 Ultimately, the Yappi.com posters were unable to reason this disaster of a season from happening.

The Hoban game happened and was a blowout that was later ruled a scrimmage. FloSports would later remove the archive from the game. In the week after that, Bishop Sycamore played two games in three days with the second being on ESPN, with multiple injuries occurring. Bishop Sycamore didn’t have away uniforms, enough helmets, nor enough lineman in any of the games. It was all expected. 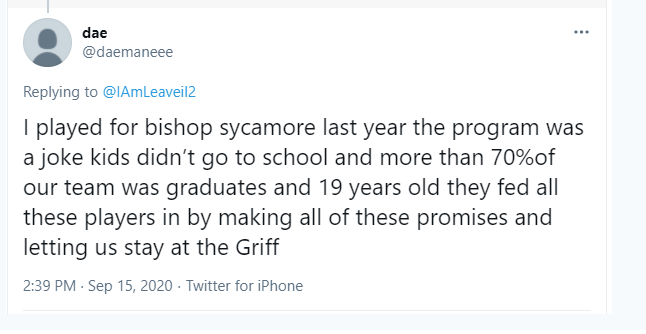 Jersey Flyer disappeared from the board shortly after the Hoban game. If only IMG, ESPN, Paragon Marketing, Hoban, and so many others would have just listened to collective wisdom of the Yappi.com community.