One of the more interesting media angles in the ongoing Bishop Sycamore situation is about the involvement of former Ohio State and NFL defensive lineman and current ABC6/Fox28 (Sinclair-owned local Columbus affiliates) football analyst Jay Richardson. Richardson has been mentioned a lot around Bishop Sycamore, and around its predecessor “school” Christians of Faith Academy, including in multiple lawsuits. But he told ABC6 colleague Haley Nelson Tuesday that he has “zero involvement with Bishop Sycamore“:

ABC6/FOX28 sat down with Richardson Tuesday to ask him if he has any involvement with this new venture Bishop Sycamore and this lawsuit that’s connected to COF:

“My legal team is working to get my name removed from this. I have not signed any documents, no involvement with that particularly other than trying to help the school get resources at one point. And once I realized that is just wasn’t going to be possible, I said ‘hey look I can’t help out’,” Richardson said.

Q: So why would they put you in that lawsuit if your name wasn’t in any of those documents?

A: “Well I think because they probably see an opportunity to involve someone that they feel like could help them recoup some of those funds, and I guess that is probably the best way I can answer that.”

Q: Do you have any involvement with Bishop Sycamore?

A: “Zero involvement with Bishop Sycamore however I do wish them, and all parties involved, the best, because I know there are kids involved and you want to see this thing end up positively if it can.”

Here’s the video version of this interview that aired on ABC6 Monday night:

AA’s reporting casts significant doubt on that “zero involvement” claim, though. First off, Richardson’s answers to Nelson deserve a lot of scrutiny. In particular, the Franklin County court filing from Aug. 27, 2021 (earlier this week) in the case of First Merchant Bank against Richardson, since-fired Bishop Sycamore coach Leroy Johnson Jr., and “The Richard Allen Group” brings up a whole lot against Richardson. Those include a finding that he, Johnson, and the group committed fraudulent misrepresentation (because they didn’t respond to the claims that they had done that). Richardson did respond to this lawsuit with a memo countering some (but not all) of the bank’s assertions, so he was well aware of this lawsuit. That document is worth reading in full (and it’s only one of the many lawsuits involving Bishop Sycamore), but here is the key part from it:

That is absolutely not “they probably see an opportunity to involve someone that they feel like could help them recoup some of those funds.” Those court documents spell out that Richardson was involved in making these fraudulent misrepresentations. And it says something about these news stations’ coverage of this that they printed Richardson’s “Zero involvement” and “they’re only going after me because I have money” claims without any rebuttal or any counterevidence. But that’s just the start of the saga of Richardson’s involvement.

Beyond that, a 2012 Metro story from Kristian Dyer listed Richardson (then with the New York Jets) as a partner with Johnson in an insurance brokerage. Previously their focus was commodities trading but they decided to “focus on insurance ‘where we saw the potential to make real money.”‘

So there’s a history of Richardson and Johnson partnering in ventures aiming to “make real money.” And that connection appears to have extended to the school; one particularly notable indication of Richardson’s involvement with the school comes from an interview that AA conducted with Andrew King. King recently wrote a recap of this saga for Columbus Monthly, but before that, he worked at local Columbus outlet ThisWeekNews, and wrote extensive pieces on COF Academy in 2018, including one listing Richardson as superintendent. King told AA that he repeatedly received pushback from Richardson on those stories and on Richardson’s inclusion in them, rising to the level of a “good cop/bad cop” meeting with Johnson and Richardson:

“I don’t want to make it seem like he was threatening or anything, like violence or anything like that. He wasn’t trying to strong-arm me or anything, but the vibe was always like a ‘do you know who I am’ kind of thing. He was always just sort of… he was always very adamant that I was doing and reporting and hearing and researching, and everything was all just totally incorrect. If I published it, I would hear from his lawyers. At one point we did hear from his lawyers, who really, to be honest with you didn’t even have much to say. I think for the most part we just sort of had a conversation with them and that was about it.”

“I got to this place where Jay Richardson kept coming up and I was trying to figure out what even his involvement was. I’ve found some of the same things that I’m sure you guys have found, and reached out to him in a number of ways and got this Twitter DM that was like ‘Take my name out of your story, it’s all wrong, and you are lying in your article and you’ll be hearing from my lawyers.’ Which didn’t really lead to that much, but that was kind of the vibe that he gave off the entire time.”

“I ended up sitting down with him and Roy Johnson to just, we met at this coffee shop at downtown Columbus and they brought me this huge stack of documents that they felt like proved what they were saying. The whole time, it was like Jay saying things like ‘See, do you see how wrong you are?’ Obviously I’m paraphrasing. It was just that same sort of vibe like ‘You idiot, you can’t even understand what we are doing here. We are trying to make a difference in these kids’ lives and you are just trying to attack us for it.'”

“Funnily enough, Roy was always the much more charismatic one. Whereas Jay had this really like ‘I’m a large football player man and you should be afraid of me’ vibe. He didn’t threaten me or anything like that, but Roy would be sitting there laughing explaining something and Jay would just be sitting there scowling. It was just a funny dynamic. They had this good cop-bad cop thing going.”

King said that Richardson’s response changed over time, from the initial full denial to the coffee-shop meeting.

“It went from total complete dismissal to Jay’s going to come with me to this coffee shop. Obviously we reached some sort of place where we had him concerned.”

King also told AA that while Richardson does not appear to have been involved day-to-day with COF or Bishop Sycamore, he was listed as athletic director on some documents, and kids in the program had involvement with him. And King found that odd, considering Richardson’s status as a famed former Ohio State/NFL player and a current prominent local news figure.

“You are Jay Richardson; you don’t need to be doing this. Seems to me there is either money to be made, and we know they were charging tuition right, so that’s plausible. Or it’s just genuinely like wanting to defend your buddy. It always seems that he and Roy went way back. There’s some trails there for evidence to that. I don’t know if it’s some sort of combination of the two.”

“I don’t know if this was like… it was always hard to pin down who was the driving force and who was the kind of the support between those two guys. But it was always those two guys and that’s the thing. There were early documents that had Jay Richardson as the AD on stuff. I never found any evidence that it was really true. I think it was just somebody throwing a name on there that people knew.”

“So I don’t think he had that much involvement, but the kids had seen him around. Some of the kids I had talked to had seen him around; he was certainly involved. Why would have he come to that meeting with me if he wasn’t? I always found that very strange, as well that one minute he would be like ‘I have nothing to do with this school’ and the next minute be like ‘We are just trying to help these kids.'”

Also, Awful Announcing received a link to the Mjölnir Development LLC listing on Open Corporates, which lists the company as active, says it was incorporated in August 2016, and lists Jay Richardson and Roy Johnson as incorporators and Johnson as agent. 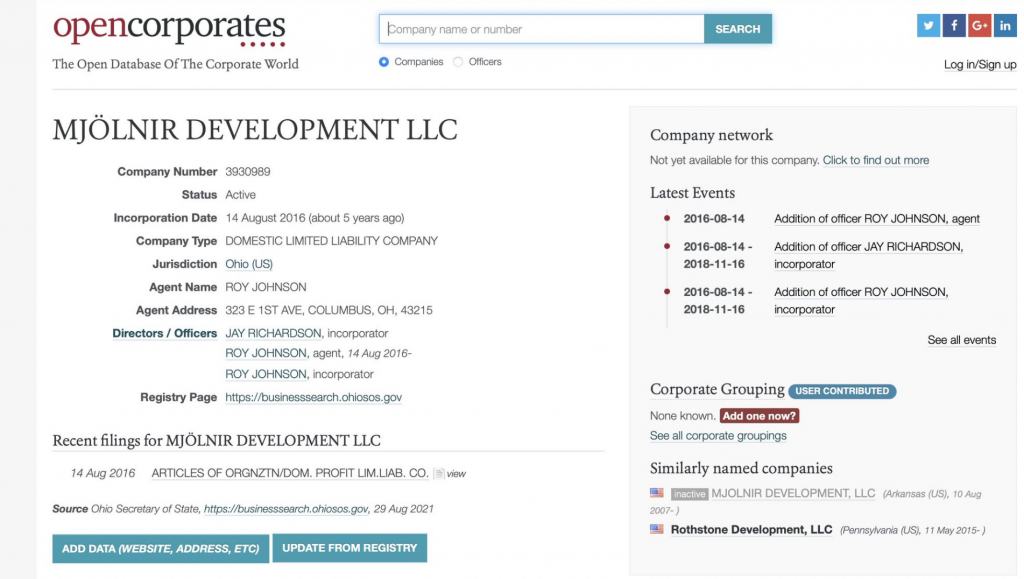 Okay, so there’s some good evidence there for Richardson’s involvement with the school. Which you would think he would disclose when he decided to feature them as part of his local media job, right? No and no. Instead, we found videos of him praising the school for the highly dangerous approach of playing two games in three nights, and even featuring school director and OL/DL coach Andre Peterson (here just referred to as “Coach”) and some of the Bishop Sycamore players on his local high school sports show in 2019 without disclosing his connection to them. Here’s that clip (it’s from the second video in the previous link), starting around 0:35:

Shockingly in the above clip, Richardson is told that Bishop Sycamore will play twice in three days (one in Pennsylvania, the other in Baltimore, with this interview in Columbus in between) and responds “That’s awesome. That’s big time!”

Awful Announcing reached out to Sinclair a day ago and has not heard back. Richardson blocked us on Twitter after we reached out.

At this point, it isn’t possible to prove exactly how involved Richardson was with Christians of Faith and then Bishop Sycamore. But there’s a compelling amount of evidence that he was regularly around his program, that he was seen by banks as making representations about this program and its finances, that he tried to intimidate a reporter who wrote about this program, and that he used his local TV platform to spotlight this program without revealing any of his involvement with it. Clearly none of that is a good look for Richardson, or for ABC6/Fox28, who have will have to explain to their viewers if there were any conflicts or involvement that was not properly disclosed.