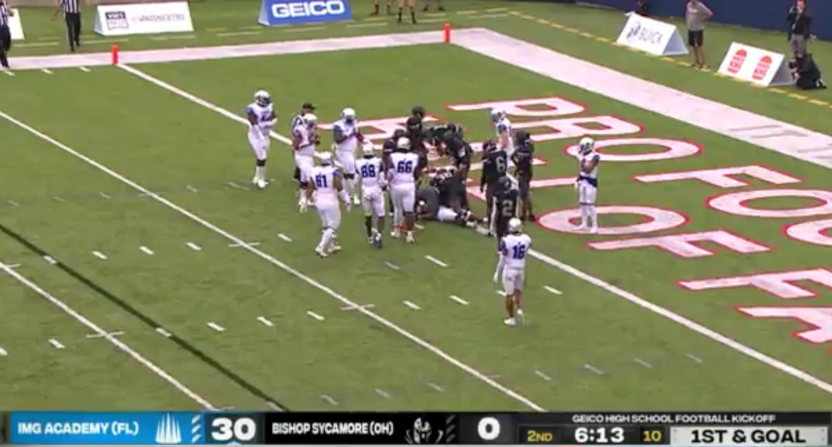 High school football often sees a lot of blowout games between unequally-matched teams, but it’s rare to see one of those wind up as one of the few high school games featured nationally on ESPN’s main network. That’s what happened Sunday, though, with the IMG Academy-Bishop Sycamore game (part of the GEICO ESPN High School Football Kickoff) ending 58-0 in IMG’s favor. And what was maybe more notable than that blowout was the degree to which ESPN’s announcers (Anish Shroff and Tom Luginbill) went in on Bishop Sycamore, including disputing the school’s claims about having Division I recruits, criticizing the game that they were showing, and questioning how it wound up on their airwaves. Here are some clips of that (a transcription follows):

“It’s very, very clear that they can’t match up.” “No, they can’t match up. And you already saw Trillian Harris, their quarterback, get dinged up. And the last thing you want is to have this showcase on national TV. …The point to finish here is, you look at IMG and this is the most talented prep team in the country. Bishop Sycamore told us they had a number of Division I prospects on their roster, and to be frank, a lot of that, we could not verify. They did not show up in our database, they did not show up in the databases of other recruiting services.  So, okay, that’s what you’re telling us, fine, that’s how we take it in. From what we’ve seen so far, this is not a fair fight, and there’s got to be a point where you’re worried about health and safety.”

“I already am worried about it. I think this could potentially be dangerous given the circumstances and the mismatch that we have here. And quite honestly, Bishop Sycamore doesn’t have not only the front-line players, but they don’t have the depth in case something were to happen to their roster with a kid or two here throughout the remaining two quarters of this football game.”

In many respects, this should not have been surprising from Bishop Sycamore. The first season MaxPreps has data from for them is 2020, and they went 0-6 that year, including a 56-6 season-ending away loss to IMG on October 16. They scored 42 points that year and allowed 227. So this clearly wasn’t a good team last year, and it shouldn’t have been expected to be a good team this year. Also, it looks like they played a game two days ago against Sto-Rox in Pennsylvania (a 19-7 loss). Presuming that’s the same Bishop Sycamore, there’s no way a high school team should be playing on that short of rest. At any rate, this led to a blowout and to a lot of online criticism; here’s some of that.

This is what happens when ESPN gets duped into airing a high school football game between the most talented team in the country and an online charter school nobody has heard of, went 0-6 last year, and lied about its roster to get on TV. pic.twitter.com/QUwM8BQKiY

ESPN is spending the rest of this game apologizing for this game and praying for the safety of the Bishop Sycamore players involved.

Listening to ESPN essentially acknowledge that they’ve been duped into covering this game today is kind of wild.

Imagine that. Bishop Sycamore didn't give the TV guys an accurate or complete roster.

This is the "roster" we were given when they played Archbishop Hoban last week… ?‍♂️?‍♂️ pic.twitter.com/e51OJCAuOA

Shroff (who, as mentioned above, called this game for ESPN) also weighed in in response to someone claiming that other Ohio schools turned down this opportunity:

Sorry. They had no business being in that game today. None. I feel bad for the kids. Player health and safety was at risk today. It was uncomfortable for anyone who watched. https://t.co/Eq39vdywLm

AA has learned that this game was scheduled by Paragon Marketing Group. Paragon president Rashid Ghazi told AA his company did not know that Bishop Sycamore played on Friday night, and would have canceled Sunday’s game if they had known that. However,  this broadcast of Friday night’s game seems to show Bishop Sycamore players wearing the same numbers and in the alignments we saw Sunday:

Ghazi said his company wishes they’d done more diligence here, but noted that it’s difficult to find opponents willing to play IMG. But this doesn’t seem like a particularly good opponent for IMG. And it seems like something could have been done to give them a better matchup for this slot. The matchup they wound up with led to a blowout, and led to on-air and online criticism. And it didn’t work out great for anyone.