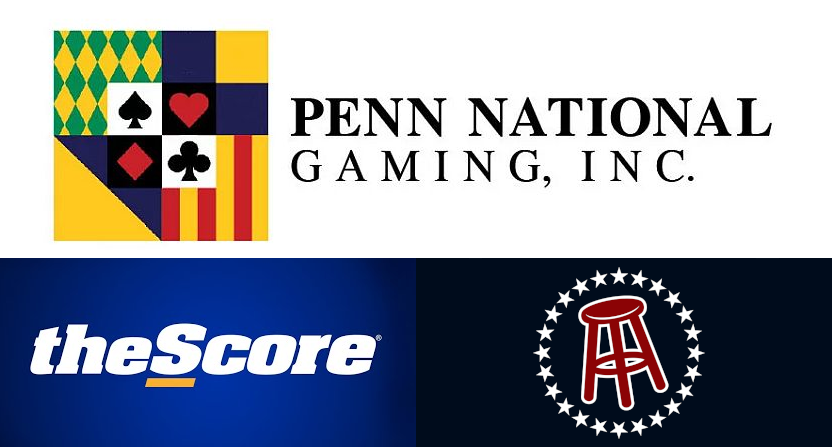 Casino and sportsbook operator Penn National, which purchased a 36 percent stake in Barstool Sports and an expansion to 50 percent over time back in January 2020, has made another big sports media acquisition. They announced Thursday that they’re acquiring Score Media and Gaming (owners of theScore and ScoreBet) in an approximately $2 billion (U.S.) deal that will give current Score shareholders cash and Penn National stock.

theScore started as a Canadian television channel (first Sportoscope, then Headline Sports, then theScore beginning in 2000), but the TV side was sold to Sportsnet in 2012 and rebranded as Sportsnet 360, with theScore keeping its digital assets.  Since then, they’ve doubled down on their app (which they state in this acquisition release is the largest sports app in Canada and the third-largest in North America), and have found further success with pushes into esports coverage and sports betting (both coverage and operating a betting app). Given their Canadian market strength, there are also benefits for them from the June Canadian Senate approval of Bill C218, which paves the way for single-game betting in Canada. (That bill still needs royal assent, and there will then be province-by-province implementations of it, so there’s a lot that’s not happening immediately, but the Canadian betting market is likely going to change substantially within the year.)

However, there have been some recent struggles for both theScore and for Penn National, part of a larger hit for betting-focused stocks in particular in July. As Sportico’s Brendan Coffey wrote Monday, theScore stock dropped 22 percent in July, while Penn National also fell 10.5 percent that month. Granted, July was a rough month for a lot of sports stocks with betting components, with DraftKings stock falling 7 percent, Genius Sports falling nine percent, and Caesars Entertainment dropping 15 percent. But theScore in particular fell further than competitors after missing sales and net loss estimates significantly, with even the Canadian betting news not enough to overcome that.

So that makes the timing here interesting. And the announcement of this acquisition has given a big boost to both Penn (traded on NASDAQ) and theScore stocks. Penn rose from $62.90 at market opening (down from $66.24 at close the previous night) to $71.45 as of noon Eastern (a gain of 12 percent from market open), while theScore (also traded on NASDAQ) was at $18.14 the previous night, opened at $29.55, and was at $32.31 by noon Eastern (a gain of 34 percent from Wednesday night and 8.5 percent since market open). So investors in both companies seem to be liking this move so far. Here are some quotes on what to expect from this acquisition (estimated as an early 2022 close) from that release:

Jay Snowden, President and Chief Executive Officer of Penn National, commented, “We are thrilled to be acquiring theScore, which is the number one sports app in Canada and the third most popular sports app in all of North America. theScore’s unique media platform and modern, state-of-the art technology is a powerful complement to the reach of Barstool Sports and its popular personalities and content.”

Mr. Snowden continued, “We are now uniquely positioned to seamlessly serve our customers with the most powerful ecosystem of sports, gaming and media in North America, ultimately creating a community that doesn’t currently exist. Users will enjoy a unique mobile sports betting and iCasino platform with highly customized bets and enhanced in-gaming wagering opportunities, along with highly engaging, personalized sports and entertainment content, and real time scores and stats. We believe this powerful new flywheel will result in best-in-class engagement and retention.

“Importantly, the transaction provides us with a path to full control of our own tech stack. theScore has developed a state-of-the-art player account management system and is finalizing the development of an in-house managed risk and trading service platform. This should lead to significant savings in third party platform costs and allow us to broaden our product offerings – providing the missing piece for operating at what we expect to be industry leading margins. In addition to the synergies, we’ll be gaining access to theScore’s deep pool of product and engineering talent and data-driven user analytics which will help drive our customer acquisition, engagement, retention strategies and cash flows.”

…John Levy, Chairman and Chief Executive Officer of theScore, commented, “This deal brings together two companies that share a vision for how media and gaming intersect, and we could not be more excited to join the Penn National family. I’m proud of theScore team and all of our accomplishments, and believe the time is right to take the next step and align with a company in Penn National with the resources and scale to accelerate our business. We are excited to join forces with Penn to form the most powerful media and gaming company in North America.

“We’ve built an innovative, technology-led integrated media and gaming business that has us poised for success across North America, including the highly anticipated upcoming rollout of commercial sports betting in Canada,” continued Mr. Levy. “With Penn’s support, we will continue to invest in building our Canadian operations, growing our footprint and expanding our workforce. On a personal note, Benjie and I are very much looking forward to continuing to head up theScore as part of the new combined company.

“We have been strategic partners with Penn National since 2019 and have come to realize that they have the same strong culture and appreciation for how to grow a business. Jay and his team have done a tremendous job building an exceptional retail business and online gaming platform in partnership with Barstool Sports and we are confident that by combining our leading sports media brand and proprietary technology, we will solidify Penn National as a market leader,” concluded Mr. Levy.

The release goes on to mention that “Penn National intends to operate theScore as a stand-alone business, headquartered in an expanded Toronto office, that will continue to be led by the Levy family with the same operating philosophy that has driven the company’s success to date. The business will continue to utilize ‘theScore’ app and brand that consumers have come to trust.” So this isn’t going to see the Canadian operations rebranded, at least not immediately. But Snowden’s comments about theScore as “a powerful complement” to Barstool Sports suggest there may be some upcoming integration of Barstool content and personalities into theScore’s app and its other digital offerings.

It’s going to be interesting to see how this one plays out in the long term, and just how much Barstool/theScore crossover there winds up being. The release there talks significantly about theScore’s product and engineering talent, and it seems likely that that talent will also wind up working on Barstool online offerings (either still separately branded or combined). And we’ll see what that means for the content side as well; Barstool and theScore have taken pretty different approaches to sports media content to date, and appear to have pretty different fanbases, so integration there may not be simple. At any rate, this is certainly a big move for all parties involved, and it makes Penn National and the two different content companies they own even more of a presence in the online sports betting world.