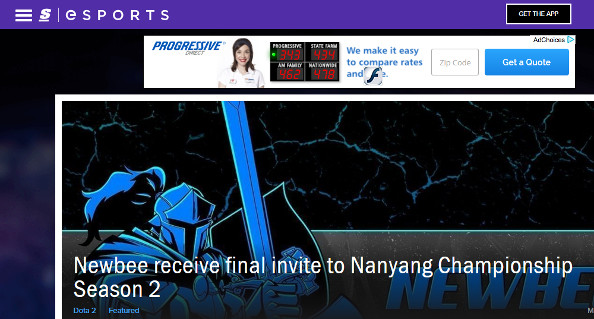 Competitive video gaming coverage has become a big part of the traditional sports media world recently, with Turner creating, covering and broadcasting the ELeague competition (Twitch streaming details for that were announced Friday) and ESPN, Yahoo, and Bleacher Report all launching eSports verticals. Those are all big media companies that have eSports as a small part of what they do, though. An interesting approach from the other side comes from Canada’s theScore, a much smaller media company that’s made eSports coverage one of its main focuses, and is employing more people specifically for eSports coverage than either ESPN or Yahoo. As Digiday’s Sahil Patel writes, eSports has become a critical part of The Score’s identity:

Toronto-based theScore is building a one-stop shop for all the news and stats about the booming industry.

In fact, of the 230 people employed by theScore, 45 are dedicated solely to covering eSports. This group spans reporters, editors, data entry specialists and video producers, all focused on providing the latest updates for all major gaming leagues including “League of Legends,” “Dota 2” and “Counter-Strike: Global Offensive.” This group is publishing between 20 to 30 pieces of content every day, with the number rising to as high as 50 during important competition days, according to Kyle Chatterson, director of eSports content and partnerships for theScore.

“Ultimately, eSports and traditional sports are the same thing,” said Chatterson. “I watch ‘League of Legends’ the same way I watch basketball or the UFC. So we want to treat it the same.”

…In addition to articles and videos covering the major leagues, teams and players, the app features a comprehensive database of the latest match results as well as team and player statistics. (The publisher’s eSports team includes 17 full-time data specialists focused on making sure all of the information is up to date.)

“If you look at something like ‘League of Legends,’ we’re covering data for North America, Europe, China, Korea and Southeast Asia — five regions and it’s just one game, so you need to devote significant manpower for it,” said Chatterson.

So, theScore is throwing a lot of people at this, and substantially more than their competitors. Patel’s piece says that IGN has only one person fully dedicated to eSports, albeit with 17 covering gaming in general, while Yahoo and Bleacher Report each have 12. ESPN numbers aren’t included, but given that they launched their vertical in January with just three named staffers, it seems unlikely they’re near 45. How successful is this eSports-focused strategy really proving, though? The numbers in Patel’s piece certainly aren’t bad, but they suggest that eSports still only accounts for about 10 per cent of theScore’s overall monthly uniques:

The move has been working out for theScore, which reached 7.5 million uniques in April, according to comScore. Its eSports vertical, which includes a mobile app launched in March of 2015, now has 750,000 monthly unique users, according to the company.

That’s certainly not insignificant traffic, but plenty of sites with much smaller staffs focused on much more specific areas have claimed way higher numbers. It’s also interesting that theScore’s uniques in general (which includes their coverage of traditional sports) seem way higher than their eSports content alone despite the staffing priorities; 45/230 is 19.6 per cent of their staff on eSports, but that’s drawing just 10 per cent of the traffic. comScore numbers are far from perfect, of course, and their eSports hub is still relatively new (as is eSports coverage from mainstream sports organizations in general), so there’s a chance its contribution to the traffic numbers and the bottom line could rise significantly over time, especially if the eSports coverage from other media organizations helps bring new fans to the sport.

This is just the latest rebranding and change in focus for theScore. They started life as a Canadian TV channel that broke into the market with a sports news emphasis, then branched out into a wide variety of other sports, including WWE, Canadian university football, basketball and more. They also had an aggressive digital strategy early on, including their still-prominent app and a network of websites (disclosure: I used to run/write for a couple of those), and they even landed the guys from The Basketball Jones (now NBA TV’s The Starters) for a combination of TV and digital content. 2012 saw the TV side sold to Rogers (it was later rebranded as Sportsnet 360) and the remaining digital side double down on content, including longform features, and they even hosted Blogs With Balls 5 in October 2012.

Since then, though, they’ve moved away from the features side and to more standard news and viral content that fits better with their app on the regular sports side. Beyond that, the overall company’s focus really appears to have shifted to eSports. Patel’s article notes that eSports in general “still has a lot of ground to make up in terms of revenue,” though, and that’s true on the coverage side as well. We’ll see if this ambitious bet on eSports pays off for theScore in the long run.