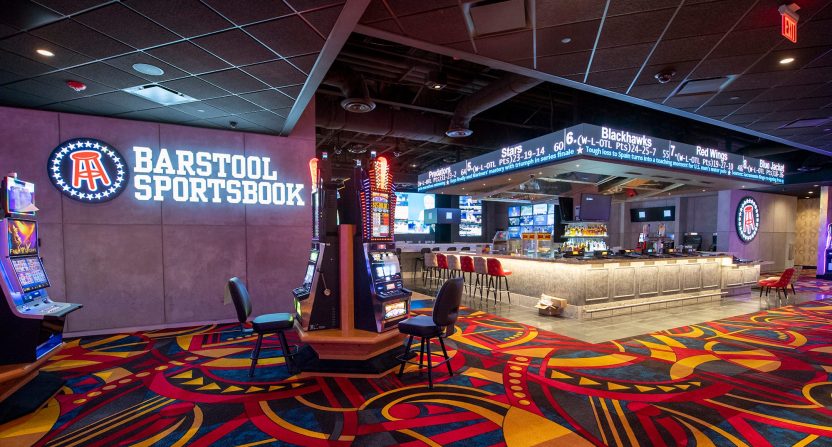 According to the Wall Street Journal, gambling regulators in both Nevada and Indiana are scrutinizing Barstool Sports and Penn National Gaming regarding the sexual misconduct accusations made against Barstool founder Dave Portnoy in recent months.

The investigations come as Penn National, which owns 36% of Barstool, is looking to fully acquire the sports media company, which includes a sports betting app.

Nevada Gaming Control Board chairman Brin Gibson said in a statement to the WSJ that the board’s obligation “is to protect the reputation of the state and the reputation of the state’s gaming industry.” Gibson said he requested information from Penn during a public board meeting in December because he was concerned about Barstool over the allegations initially reported by Insider.

Meanwhile, gambling regulators in Indiana told the WSJ it was conducting a review of Penn and Barstool “related to the recent news articles about Mr. Portnoy.” In a statement to the WSJ, the commission said “Penn is aware of the [Indiana Gaming Commission’s] ongoing concerns and we will continue to evaluate any new information that emerges.”

Penn Gaming Chief Executive Jay Snowden says that the company has answered regulators’ questions and is updating both boards with any new information.

Insider (formerly Business Insider) initially reported in November that Portnoy engaged in aggressive sexual encounters with multiple women and filmed some of them without permission.

“Insider spoke with more than two dozen people with direct experience with Portnoy and Barstool, including eight current or former employees,” wrote reporter Julia Black. “Some women, as young as 19 who had no professional connection to Portnoy, recounted having sexually explicit online exchanges with him. Three of these women said they had sex with Portnoy, now 44, and that the encounters turned into frightening and humiliating experiences that have taken a toll on their mental health. Two, including Madison, said Portnoy both choked and filmed them without advance permission; another, who has had depression, said she was suicidal after the two had sex.”

Portnoy strenuously denied the allegations with a two-part 12-minute video response followed by an extensive intimidation campaign that has become his and Barstool’s hallmark.

In January, Insider returned with a second report in which three more women alleged sexual misconduct by Portnoy. All three women echoed the earlier accusations, saying that Portnoy filmed their sexual encounters without consent. One of the women also claims that Portnoy broke one of her ribs during an encounter.

A letter from Portnoy’s attorney to Insider said that all of the described sexual encounters “have been entirely consensual” and that the Barstool founder “never filmed any sexual encounter surreptitiously or without the full knowledge and participation of his partners.” Portnoy later announced that he was suing reporter Julia Black and Insider.

On an investor call the week of the second report, Snowden confirmed his full support for the Barstool partnership, citing that Barstool is “unusually profitable in its field and grew its social media reach 25% last year.” In speaking with the Wall Street Journal, Snowdon reiterated that he stands by Portnoy, saying he finds the Barstool founder “to be very honest” and that he sees Barstool’s media appeal as essential to Penn’s future in sports betting and digital media.

While awaiting the outcome of these investigations, Becky Harris, a former chairwoman of the Nevada Gaming Control Board, told the WSJ that the kinds of allegations against Portnoy and Barstool could become a real problem as gambling regulators adopt and implement new policies aimed at preventing harassment “with regard to women” in particular.

The allegations, along with previous comments and controversies, may have also contributed to pushback from some universities that would have participated in the Arizona Bowl, which is sponsored by Barstool Sports. The game was eventually canceled due to COVID-related issues.