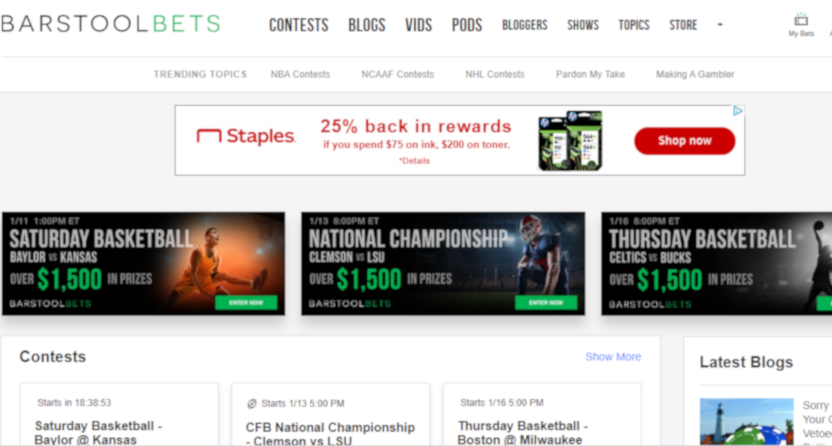 It appears that Barstool Sports is close to being sold to casino company Penn National Gaming. Back at the start of November, Ryan Glasspiegel of The Big Lead reported that The Chernin Group (which took a majority stake in Barstool back in January 2016 and then announced they were investing another $15 million in the company in January 2018) “was exploring the sale of Barstool to a gambling operator” and that one source said talks were in “advanced stages,” but no particular company was mentioned at that point. In early December, Branded Sports ran a piece headlined “Reports: Barstool Sports Has Been Sold To Philadelphia Based Company” with “A source close to the situation is reporting to Branded that Barstool Sports has been sold to the Conshohocken, PA based company, Penn Interactive Ventures. The amount of the sale was not yet been disclosed.” And now, Recode’s Peter Kafka is furthering the talk about Penn National with a piece titled “Barstool Sports is close to selling to a casino company you’ve never heard of“:

Sources say The Chernin Group, which currently owns Barstool, is in advanced talks to sell a majority stake in the company to Penn National Gaming, a publicly traded, regional gambling company that operates 41 properties in 19 states.

Barstool was last valued at more than $100 million, but a potential purchase price could be much higher, and might create the biggest media-gambling tie-up in the US since the Supreme Court legalized sports betting in 2018.

…The deal would tie Barstool, a well-known company with a passionate audience, to a casino company you may have never heard of, which is part of the logic of the tie-up: Industry observers expect Penn National, which operates properties like the Hollywood Casino in Bangor, Maine, and the Greektown Casino-Hotel in Detroit, to adopt the Barstool brand for at least some of its operations.

Meanwhile, Barstool founder Dave Portnoy gave Glasspiegel a statement that’s far from definitive, but one that does seem to indicate a tieup of some sort with a gambling company may come soon:

Asked for comment about Recode’s story, Dave Portnoy tells The Big Lead: “Same thing as I’ve publicly said since gambling was legalized in the United States. It’s a logical fit for us and we continue to speak or have spoken with everybody from Draftkings, to Fanduel to Stars to PointsBet to Penn to Willam Hill to MGM to Rush Street etc. I think that if we aligned ourselves with one company with a shared vision that company would have an extraordinary advantage in the race to becoming the leading gambling company in the United States.”

Barstool currently runs a freeroll gambling service, Barstool Bets (seen above), which they launched in September. They also incorporate gambling content throughout their website and their shows, including the specifically gambling-focused The Barstool Sports Advisors, which started as a split show between their website and TVG (owned by the same parent company as FanDuel) but then became a show solely on Barstool’s website. Back in July, they also hired David VanEgmond, formerly EVP/head of strategy at FanDuel, to be their head of strategy/corporative development. So there’s clearly a fair bit of gambling focus there, and having Barstool bought by a gambling company like Penn National could possibly be beneficial for both parties. That would let Barstool expand their actual gambling operations, and it would get Penn National a lot of publicity and presumably a lot of new users.

There of course have been plenty of controversies around Barstool over the years, and that’s ended some deals for them, most notably with the Barstool Van Talk ESPN show. Their controversies were also cited as a reason why their attempted bowl game sponsorship didn’t happen. So picking them up would carry some risk. It’s notable that there are still some issues out there between gambling operators and leagues, too, and acquiring Barstool certainly wouldn’t help an operator’s relationship with the NFL in particular given the history there. But the company does have a lot of avid fans, and their audience includes both current sports bettors and new bettors gambling companies are trying to attract, so it certainly would make some sense for a gambling operator to buy them. We’ll see if that winds up being Penn National or not.

This partnership will include a combined "digital experience" on SI.com, and a co-branded network of team sites.

Rich has been named to head the new "Deadspin," but there's little reason to believe it will share more than a name and a URL with the old site.

The history of the Von Erich family is filled with tragedy.

"We don’t want to make music docs that just cover the beginning, middle and end of someone’s career."

This partnership will include a combined "digital experience" on SI.com, and a co-branded network of team sites.

Rich has been named to head the new "Deadspin," but there's little reason to believe it will share more than a name and a URL with the old site.

The history of the Von Erich family is filled with tragedy.

"We don’t want to make music docs that just cover the beginning, middle and end of someone’s career."