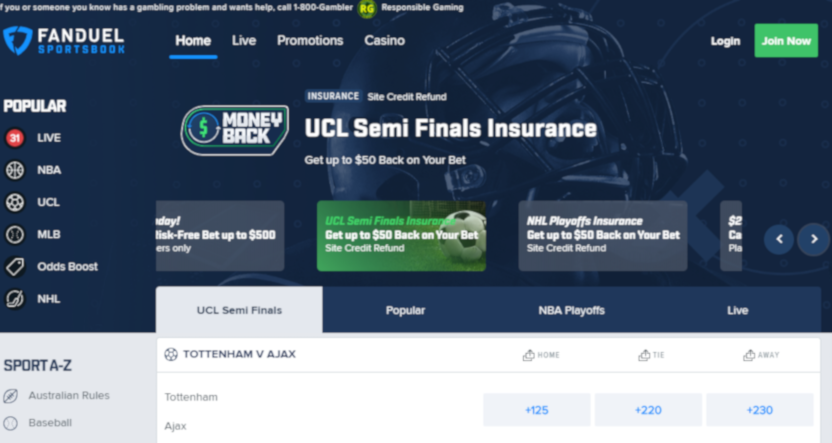 The news of FanDuel becoming the first U.S. sports betting operator to offer live game streams on their website and app is perhaps more interesting for what it might signal than for the actual rights they’ve acquired. These rights come from an expanded partnership with Sportradar, and they’re mostly for non-marquee tennis events and German Bundesliga games. But even though these rights aren’t top-tier and aren’t exclusive, this may just be the first U.S. step towards the idea of combining viewing and betting in the same interface.

As Eben Novy-Williams writes at Bloomberg, that approach is common in Europe and has found success there:

The sports are not top tier — mostly midlevel tennis and German Bundesliga soccer — but FanDuel believes the prospect of streaming and betting on a game on the same platform will draw more people to those options. In Europe, for example, gambling interest in specific events can double or even triple when odds are offered alongside live rights, according to Niall Connell, general manager of FanDuel Sportsbook.

“If you’re betting on something, you tend to want to watch the outcome of it,” Connell said in an interview. “It’d be a bit like betting on a horse race but not being able to see the actual race at all. Plus, a lot of this tennis content is matches that aren’t on terrestrial TV.”

…In European markets, offerings like this are common on anything from English Premier League soccer to National Basketball Association games. The video feeds are smaller, with lower resolution, so as not to infringe on the rights of media companies paying for the full rights packages.

The horse racing analogy is interesting, as showing horse races from all over at a place where people can bet on them has definitely paid off for numerous racetracks and casinos. (And FanDuel and parent company Paddy Power Betfair know that well, as they own and operate TVG and TVG2, two horse racing-focused channels that they’re now also airing betting shows on.) And while the base audience for these particular tennis and Bundesliga matches probably isn’t huge (judging from Fox’s Bundesliga ratings), there may be at least somewhat of an audience intrigued by watching contests and quickly making in-match bets on the same app. But this is probably a bigger deal as the first step in something that might feature larger sports properties down the line.

As Novy-Williams writes, top U.S. sports content is generally locked up in exclusive deals for the next several years, which has created hurdles for companies like DAZN that are trying to break into the market. So don’t expect to see top-tier U.S. leagues available under this kind of setup too soon. However, once those deals run out, U.S. leagues could possibly follow the European precedent and sell lower-resolution streaming-only packages to gambling providers in addition to their standard TV and streaming rights.

And it’s not likely to be just FanDuel interested in rights they can stream in their app. With these current rights being non-exclusive, Connell told Novy-Williams he expects competitors like DraftKings and William Hill to follow suit, and DraftKings has previously made some noises on that front. And if multiple companies get into streaming sports in betting apps, that further ups the incentive for leagues to sell gambling-focused rights packages; that could lead to either competitive bidding to be the sole partner of a league on this front, or in leagues selling the same package to multiple gambling providers, and either scenario could provide leagues with a revenue boost.

There are certainly potential hurdles towards that, including state-by-state challenges with sports gambling legalization and how regulators might feel about sports leagues selling gambling-specific rights packages. But this could be the first step on that road. And while nothing’s imminent with bigger leagues considering how their rights are locked in, you can bet they’ll be watching this experiment. And FanDuel may also get some advantages from being the first U.S. mover here, and from getting some time to test this out with smaller rights. That could let them see what kind of interest it draws and what features viewers want, and it could lead to a more polished in-app experience by the time there are larger rights available.