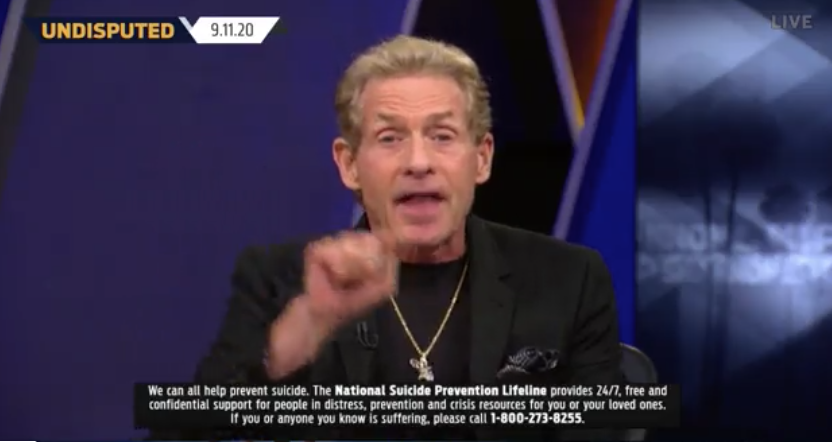 There is a very small chance today was Skip Bayless’s last day on FS1. His initial four year contract with Fox is reported to be ending this month. No extension has been reported at this time. Undisputed’s first episode aired this week four years ago. Perhaps his contract ends later in the month. Perhaps an extension has already been reached but not announced. Perhaps it’s still being worked out and he will or has been working without one until it’s finalized, but it’s been crickets. Nobody knows.

Back in May, a Friday episode of Speak For Yourself ended with little fanfare. The following Monday, Jason Whitlock wasn’t on the show. Hours later it was reported Whitlock was no longer with Fox. His contract had ended. There was no send-off. There was no announcement on social media. The hosts didn’t acknowledge on Monday that the longtime host of the program had moved on. This odd parting set a precedent that big name talent could just disappear into the ether from Fox at the end of any contract. That’s not usually how large departures are handled, but this is FS1.

There were whispers that Bayless was looking at other opportunities (including a return to ESPN, though “going to ESPN” is what everyone in sports media uses for leverage whether or not it’s a real option) though smart money was on a new deal with Fox.The real question was how much Bayless and his agent would be able to wrangle from Fox, an especially difficult task during a pandemic that has financially kneecapped the networks.

Bayless certainly didn’t do himself any favors yesterday as he went beyond his usual shtick and launched what was probably the most reviled, toxic take from a Fox tenure full of them. On National Suicide Prevention Day, no less! I’m not sure this could happen at another network, but this is FS1.

Bayless says a lot of dumb shit. It’s always been a feature, not a bug, for both his career and for Fox. This time, though, he touched a major nerve. It wasn’t his normal blend of contrarian, controversial, trolling, and stupid. It was offensive. REALLY offensive. It was now cleanup time for Bayless and Fox which, on the surface, shouldn’t have been impossible. Common decency, good PR, and Bayless committing to a sincere apology was a pretty clear path to this story disappearing over the weekend, but this is FS1.

Step 1- Bayless would tweet an apology last night, crafted by someone at Fox if he couldn’t bring himself to do it.

Step 2- Fox would issue some type of meaningful apology and perhaps even some discipline. Talent have been suspended for much smaller transgressions at other networks.

Step 3- Bayless would go on today humbled and dive right into how shitty his remarks were. A sincere apology, or at least one that would have looked and sounded sincere enough, regardless of who actually wrote it.

NONE of those things happened, because this is FS1. Bayless didn’t address any of it last night, instead tweeting about the Rockets and the Texans, a total of 8 times. Fox did put out a statement, one that nobody at Fox put their name on, and one without an apology to Dak Prescott or to viewers. 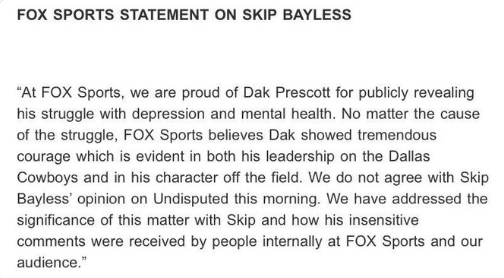 That left a lot of people waiting for Undisputed this morning to see how Skip would address the topic. The result shouldn’t have been surprising: Bayless didn’t give a shit. Nearly 90 minutes into the show, there wasn’t one mention of the raging controversy. It was business as usual, the show jumping from topic to topic while avoiding the elephant in the room. People were shocked, but they shouldn’t have been. This is FS1.

It is cynical for Undisputed with Skip not to address his Dak comments or indicate it will.

Bayless finally teased something was indeed coming, but not until Undisputed made viewers sit through another 20 minutes of debate comparing Tom Brady to Michael Jordan, because, well, this is FS1.

I’m about to comment on the Dak controversy. Now on @undisputed

And then, in a moment somehow both surprising and unsurprising: Bayless didn’t apologize.

With the absolute worse tone and body language, Bayless scraped the surface of the subject and never even got in the general vicinity of an apology. It was evident he was indignant at the idea he even had to address the controversy. No other sports network would have allowed such conversation about a major controversy to be so bankrupt, so insincere, and sandwiched by 90 minutes of normal contrived fluff on both sides, but again…this is FS1. In what could have been a story that was beginning to fizzle out now seems like a permanent stain on Bayless and the larger Fox Sports brand.

None of this is all too surprising. For better or for worse, Fox thumbs their nose at the norms that other networks employ. While competitors have firmed up social media policies for talent, Fox’s talent has routinely dabbled in divisive political discourse, including often outright Covid misinformation. While other networks have robust digital and news departments, Fox has decided the network can largely do without either.

Only at Fox do you find incidents where you’re exposed for writing fake comments touting Skip Bayless as “the man!!!”, but under the wrong account. Would another network’s former President float the ridiculous explanation that the comment was from a Facebook employee who hacked into the Skip Bayless account? How low are your standards and your general common sense when you think people will actually buy that a Facebook employee sitting on half a million dollars of stock options would randomly decide, “I’m going to post a comment as Skip Bayless on this video, delete it quickly and hope someone sees it and it goes viral.”

That’s the culture. Talent does what they want, with marching orders to get attention by any means necessary no matter how damaging the backlash is to the overall Fox Sports brand. When talent does wade into murky waters, drawing coverage from Awful Announcing and others, it’s often multiple days and emails before a no comment, if anything comes back. When shit hits the fan, there is no plan other than going into hiding and hoping people will move on.

Mark Silverman, President of Fox Sports National Networks, inherited this culture and these standards from outgoing President Jamie Horowitz and EVP of content, Charlie Dixon, who is still at the network and is most hands-on with FS1’s studio programming. The standards and culture at FS1 and the conflict it presents the larger Fox Sports was touched on in a 2017 Ringer article by Bryan Curtis when Horowitz’s tenure ended at Fox.

Fox Sports employees tended to look at Horowitz’s pirate crew with curiosity bordering on alarm. They’re so different than us. So … controversial. This critique didn’t just come from Troy Aikman, either. One longtime Fox announcer asked me: What are they trying to accomplish over there? How much rope does Jamie have?

Sixteen months ago Silverman seemed to indicate FS1 was going to change for the better.

“We’ve grown past ‘embrace debate.’ I think we’re a more mature network now,” said Mark Silverman, the president of Fox Sports national networks. “I think we have some shows with a little more element of debate and others that are smart, entertaining and interesting to sports fans.”

Insiders will tell you Silverman walked into a bit of a mess, was lukewarm on taking the job, and was inheriting a lot of believers in Horowitz’s content vision. In the year-plus since that quote, what’s changed? What’s better? The network is still mostly debate shows. Many of those re-air for hours in the afternoons and evening, presenting stale takes for games that already occurred later in the day while missing out on larger stories that have since developed.

Someone very familiar with FS1’s operations told me not too long ago that reality has set in for decision makers at Fox Sports. FS1 stumbled out of the gate, cut costs, had a lot of programming and executive churn, and has settled into its current state of low ambition. The exact quote: “They know FS1 is just a delivery vehicle for live sports and nothing else.”

If that’s the case, does FS1 need to pay Skip Bayless $5 million per year? Does it even need debate shows?

Before FS1 launched, Fox aired college football games on FX. If FS1 is going to be a network where they break even on studio content heavy on repeats at the cost of tarnishing Fox Sports overall, is a 24/7 sports network worth the hassle? Fox has already divested from their Fox Sports Regional networks. Would Fox be better served with a setup like Turner, in which big games air on TNT, TBS, and even TruTV but the network isn’t tasked with constantly churning out contrived debates to fill up the rest of the time? Airing Friends and Big Bang Theory reruns that rate better than sports debate shows seems like a much easier path if the rest of the economics were even.

While that’s purely conjecture (with a sprinkling of logic), there is no indication Fox has any interest in making such a move. However any sports rights deal that leaves the network, does begin to crack that door open a little bit more as the lesser amount of sports on the network lessens the need for such the bulky headache inducing studio operation.

Since he arrived at FS1, Bayless has been for better or for worse, the face of the network. The show is technically a success for FS1 although the show regularly averages around half the audience of its competitor and Bayless’s prior program, ESPN’s First Take. It’s often closer to 1/3rd the audience. But that bump in ratings comes with a tangible cost in Bayless’s bloated compensation alongside intangible damages to the Fox Sports brand.

With Bayless creeping up on 70, and  with a contract ending at the most convenient time imaginable, perhaps Silverman should take to heart the words of another Fox Sports icon in Troy Aikman and make good on his claim that FS1 was going to be a more mature network.

“I believe success is achieved by acquiring and developing talented, respected and credible individuals, none of which applies to Skip Bayless.”- Troy Aikman

I’d love to see it. Ultimately, though, it seems very unlikely given how Bayless’s shtick so closely matches the ethos of the network. This is FS1.