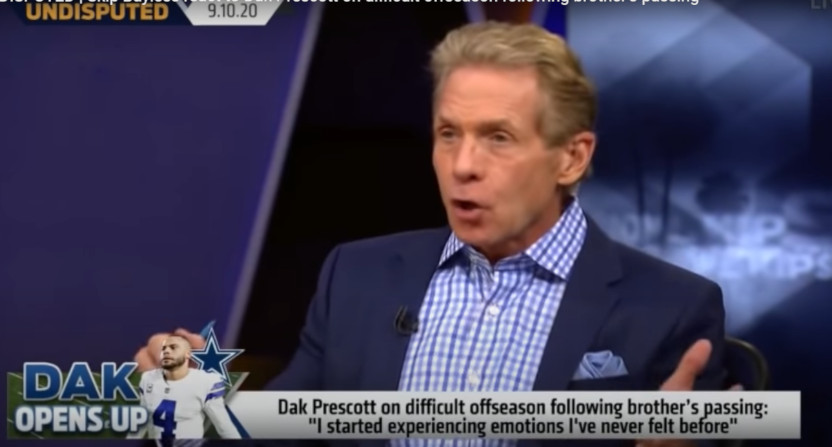 The professional sports world has made major progress on discussions of depression and other mental health issues over the past decade, with leagues like the NFL and NBA both announcing last year that every team would be required to employ a full-time mental health professional (something that had already been done by some teams in those leagues and in MLB). Other leagues like the NHL and MLS have also made mental health a focus in various ways, and the broadcasting world has gotten involved too, with commentators like Michael Landsberg, Mauro Ranallo, Kelly Hrudey, and many others being open about the mental health challenges they’ve faced and with companies providing support for mental health causes through initiatives like #BellLetsTalk. And yet, FS1 hot take artist Skip Bayless somehow managed to ignore all that Thursday and criticize Dallas Cowboys’ quarterback Dak Prescott for publicly discussing his battle with depression. (On World Suicide Prevention Day, no less.)

Bayless did that in an Undisputed segment that sunk even below his usual standards. Bayless and fellow Undisputed co-host Shannon Sharpe spent an entire 12-minute segment on Prescott’s telling Graham Bensinger about the depression battles he had earlier this year from the COVID-19 pandemic and then his brother’s suicide. And Bayless absolutely missed the entire point of these mental health discussions, saying “I don’t have sympathy for him going public” and “If you reveal publicly any little weakness, it can affect your team’s ability to believe in you in the toughest spots, and it definitely can encourage others on the other side to come after you.” The full segment was posted to YouTube on the Hoàng Bi channel, but has since been removed, and the official Undisputed account has not posted it (probably smart on their part), so here’s a Twitter video of the key part:

Here’s a transcription of Bayless’ remarks from the full (since-pulled) video:

“Okay, all well said from you, all very good points. I’m going to disqualify myself right up front on this question, I’m the wrong one to ask about this when it comes to him as the face of that franchise, of America’s Team. I’m going to ask our audience to feel free to go ahead and condemn me if you choose as cold-blooded and insensitive on this issue. I have deep compassion for clinical depression.”

“But when it comes to the quarterback of a NFL team, you know this as well as I do or better than I do, it’s the ultimate leadership position in sports, am I right about that? You are commanding an entire NFL franchise, what’s the roster at now, 53 guys? …And they’re all looking to you to be their CEO, to be in charge of the football team. Because of all that, I don’t have sympathy for him going public with ‘I got depressed, I suffered depression early in COVID, to the point that I couldn’t even go work out.'”

“Look, he’s the quarterback of America’s Team, and you know and I know, this sport that you play, it is dog-eat-dog. It is no compassion, no quarter given on the football field. If you reveal publicly any little weakness, it can affect your team’s ability to believe in you in the toughest spots, and it definitely can encourage others on the other side to come after you. You throw an interception, you’re going to hear ‘You depressed, number four?’ That sort of thing. You get sacked, ‘How’d that feel? You getting down about it?’ You just can’t go public with it, in my humble opinion.”

That’s an astoundingly bad take at any point, but especially in 2020, after all the conversations that have been had about the importance of sharing these battles publicly. It’s well-established that encouraging silence around mental health can contribute to suicide, and that open discussions of mental health can help combat that. And Bayless really should know that; as mentioned above, these conversations have been very prominent in the sports world. And his “go ahead and condemn me” preamble isn’t an excuse; he really shouldn’t have said anything beyond “I have deep compassion for clinical depression,” and should have stuck to disqualifying himself. Instead, he went out on an incredible ledge, and he’s received wide and justified criticism for that.

It should also be noted that Bayless’ personal experiences are not an excuse for his appalling commentary here, and the advice he offers on how he got through them is not universally applicable. Around the 4:50 mark, Bayless says “I had some really low moments in my childhood, and I just kept fighting, I fought through every one of them. I’ve had some low moments professionally, some dark times happened, and you’ve been through it too, and you know and I know, you just fight! You’ve got to fight back! You can’t give in to the depression. You try to rise above it, because it’s just how you’re built, it’s how I’m built. I believe it’s how that man [points at Prescott] is built. Rise above it! I’ve got to tell you, it’s been a long time since I’ve been more stunned by quotes than what he told, I think it was Graham Bensinger.” It’s good that “fighting back” and “rising above it” worked out for Bayless, but he is not a mental health professional, and there are plenty of people who need more help and more advice than those simple platitudes.

Sports are sometimes derisively described as “the toy box,” and while that’s not a fair overall assessment, there can be a little bit of truth to that. A lot of what happens on a sports field really doesn’t matter, and thus, a lot of Bayless’ ridiculous on-air comments don’t really matter. Whether it’s insults to LeBron James or blaming the wrong Eagles’ quarterback or even warring with players like Dez Bryant, it’s dumb and can be criticized, but it’s also part of the theater of the absurd that is Undisputed. But Bayless is wrong on a different level here.

Bayless’ comments that players like Prescott should hide their mental health struggles are wildly against the public positions that teams and leagues have taken on mental health, and his comments have the potential to do real harm. Bayless may be trying to limit his comments here specifically to Prescott and specifically to Prescott discussing this publicly, but it’s not really possible to do that. His comments portray that revealing you have mental health struggles is a sign of weakness, that it’s something that others will take advantage of, and that the real response should be to keep silent and “just fight!” That’s advice that goes against the recommendations for open discussions and seeking help from organizations like the National Alliance On Mental Health and the Suicide Prevention Lifeline. And it’s dangerous advice for Bayless to be putting out there.

Update: Fox Sports released the following statement on Bayless Thursday night, shortly after kickoff of the first game of the NFL season. Here’s that statement:

“At FOX Sports, we are proud of Dak Prescott for publicly revealing his struggle with depression and mental health. No matter the cause of the struggle, FOX Sports believes Dak showed tremendous courage which is evident in both his leadership on the Dallas Cowboys and in his character off the field. We do not agree with Skip Bayless’ opinion on Undisputed this morning. We have addressed the significance of this matter with Skip and how his insensitive comments were received by people internally at FOX Sports and our audience.”