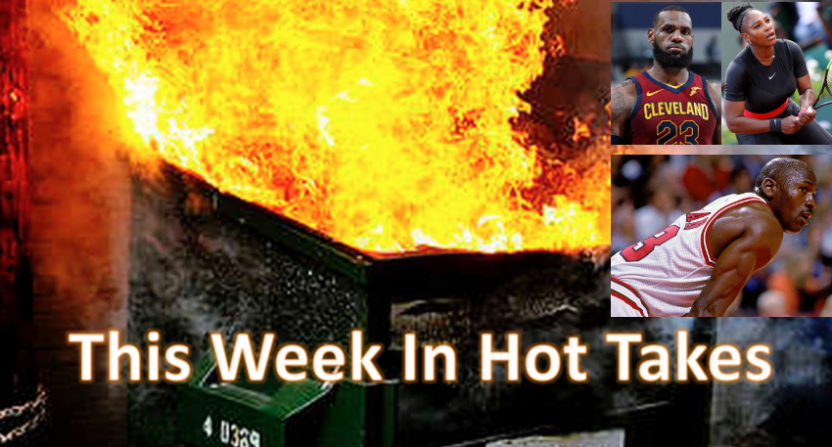 Welcome to another edition of This Week In Hot Takes, this time covering the hottest sports media takes from June 1-7.

5. Doug Gottlieb says J.R. Smith’s game would have been “fixed” if he played in college: There are always plenty of college basketball media suggesting that time at that level is necessary for players’ improvement, and Fox’s Doug Gottlieb brought the latest take on that front this week. But he did so about J.R. Smith, a player who’s been in the NBA since 2004, and not only suggested that time in college somehow would have let Smith avoid his end-of-game-1 gaffe, suggested that this was the “usual result” for someone not going to college:

JR Smith, always been crazy talented, missing some little things in his game. I think those things would have been fixed had he played at North Carolina. We skip steps, we rush the process, and this is the usual result

Gaffes still happen to those who play in college, during and after (Chris Webber’s phantom timeout was one of the most-cited comparisons to Smith’s error), and it’s also pretty ridiculous to say that one of the craziest and most obvious mistakes ever seen in the NBA playoffs is “the usual result” of players not attending college. Smith has a teammate who  famously didn’t go to college, one LeBron James, and James was the one yelling at him in the meme seen around the world. But sure, it’s a pity that Smith didn’t go to college and learn all the great lessons Gottlieb got from that experience, such as how to swipe other students’ credit cards.

4. Stephen A. Smith restarts ESPN’s LeBron to the Warriors nothingburger: There’s a lot of talk out there about where LeBron James will go in free agency, but a pretty inconceivable destination is the Warriors. This discussion started in February when ESPN took a Chris Haynes report that LeBron would “listen” to the Warriors if they had a max slot available (which, of course he’d listen, but in order to get there, they’d have to blow up a large part of their team and they’re unlikely to do that; even Haynes’ piece’s second line was “There is no indication that Golden State is evaluating such options to acquire the Cleveland Cavaliers star at this time”) and turned it into massive debate show fodder, and it came up again this week thanks to Stephen A. Smith.

Smith, in some weird potential mix of attempted reporting and punditry, went even further from Haynes’ “will listen” to say  “LeBron James will have a conversation with the Warriors this summer!” But he then didn’t offer anything to back it up, other than an argument that the Warriors would ditch Klay Thompson and Draymond Green to have a shot at maybe landing LeBron. And even his cohosts didn’t take him seriously:

That’s quite the take there, Stephen.

3. Colin Cowherd says LeBron should leave Cleveland because…his Finals record is a “blemish” on his career? Talking about LeBron’s record in the Finals, especially when compared to Michael Jordan’s 6-0 mark, is one of the dumbest takes out there. Beyond the issues with attributing wins and losses to individual players (and this series has really been great proof of how sometimes Cleveland can’t win even if LeBron is perfect), the argument presumes that it’s somehow better that Jordan lost in rounds before the Finals. It’s like talking about quarterbacks’ records in Super Bowls, and ignoring the playoff games that allow their teams to reach the Super Bowl. And Cowherd managed to take this even further, arguing that the Finals’ record not only “looks bad” and “is a blemish,” but also is a reason for LeBron to leave Cleveland:

"He's about to go 3-6 in the NBA Finals and when compared to the all-time greats, it looks bad. It is a blemish and there's only way to change that blemish: Move."@ColinCowherd explains why LeBron needs to leave Cleveland pic.twitter.com/Ma7DsBei7l

Sure, if LeBron leaves, it’s likely in pursuit of a better chance to win a championship. That would seemingly be pretty logical. But dragging the tired Finals record stat into this over and over again is a take we see far too often, and one that doesn’t actually mean anything.

2. Bill Simons waits 14 years to ask Serena Williams if Donald Trump’s theory about her being “intimidated” by Maria Sharapova’s beauty is accurate: We saw one of the dumbest sports media questions ever this week from Bill Simons, editor and publisher of Inside Tennis. Simons has been covering Serena Williams for a long time, as he made sure to note, but he somehow waited 14 years to ask her if a crackpot theory he heard from Donald Trump in 2004 was accurate:

I have never physically cringed as hard as when I read this in Serena’s transcript. Wow. pic.twitter.com/60wnSWG6En

Asking an athlete if they were “intimidated” by an opponent’s looks is bad enough under any circumstances, doing so in this convoluted way by referencing comments Trump made 14 years ago is worse, and the real kicker is how Williams had a 19-2 record against Sharapova going into this week. (She eventually withdrew thanks to injury, and Sharapova lost in the next round.) There’s no intimidation there. And there certainly isn’t a question worth waiting 14 years for.

1. Skip Bayless says “nobody ever even thought about MJ being tired,” forgets that he did exactly that: It’s well established by now that Bayless will take any excuse to criticize LeBron James, particularly in comparison to Michael Jordan. Bayless has built a TV punditry career mostly on that (especially now that he no longer has many reasons to gush about Tim Tebow), and he’s made millions for that from both ESPN and Fox for some reason. But it’s worth remembering that before Bayless was a professional shit-stirrer on television, he was one in print, causing Cowboys’ fights by printing ridiculous speculation like “Troy Aikman is gay” and causing plenty of controversy in Chicago. And this week, after Bayless made a particularly silly claim that LeBron is lesser than Jordan for discussions of him being tired, something “nobody ever even thought about MJ,” people pointed out that he not only thought it at one point, he printed it:

Think about this: Chauncey Billups just said on ABC that LeBron "looked a little tired." IT'S ONLY GAME 2 OF THE NBA FINALS. I covered Michael Jordan when he was year older than LeBron is now. NOBODY EVER EVEN THOUGHT ABOUT MJ BEING TIRED. That would've been blasphemous.