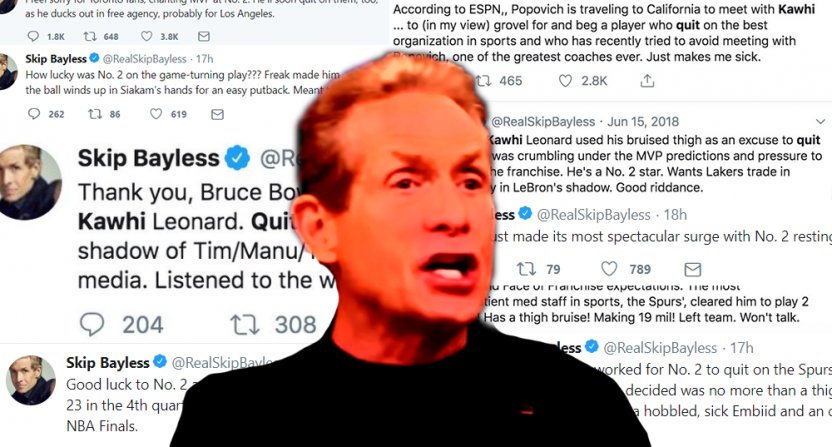 In case it wasn’t clear before this weekend, the July 2018 trade that sent Kawhi Leonard to the Toronto Raptors worked out very, very well for the NBA franchise. Leonard put the exclamation point on that with a 27-point, 17-rebound, seven-assist performance in Game 6 of the Eastern Conference Finals to send the Raptors to the NBA Finals for the first time in team history. Even if Toronto isn’t able to overcome the juggernaut that is the Golden State Warriors, it will have been worth it to unite the city and take themselves to the next level in the NBA.

And it’s not as though Leonard turned it on now. He’s been putting on a historic performance on the court all playoffs long. And while the strained relationship he had with the San Antonio Spurs beforehand left a bad taste in a lot of people’s mouths, pretty much everyone has moved on with the understanding that business is business and Kawhi is taking care of his.

Almost everyone has moved on, that is. Except for Skip Bayless.

Bayless tends to do this. He finds a popular guy that he can hate on for the sake of it, never wavering from his dumb opinion (that he probably doesn’t even believe) no matter what the evidence suggests. He’s practically made a career out of hating LeBron James. However, this season has been a real tour de farce performance by Bayless when it comes to his disdain for Leonard. He simply will not let go of the notion that Kawhi “quit” on the Spurs and makes sure to bring it up, Donald Trump-style, anytime he has to talk about the NBA superstar regardless of context.

USA Today’s Andrew Joseph compiled a collection of Bayless tweets going all the way back to April of 2018 to see when Skip’s obsession took hold and just how long he’s been going at it. Somewhere along the way, Bayless decided to even stop referring to Leonard by his name and just started calling him by his number in some kind of petty attack that clearly means something to him just makes him look like a creep and a loser.

There’s pretty much nothing Leonard can do to change Bayless’ mind (not that he should care in the slightest), proven by the video above and Bayless’ latest tweetstorm following the ECF finale. 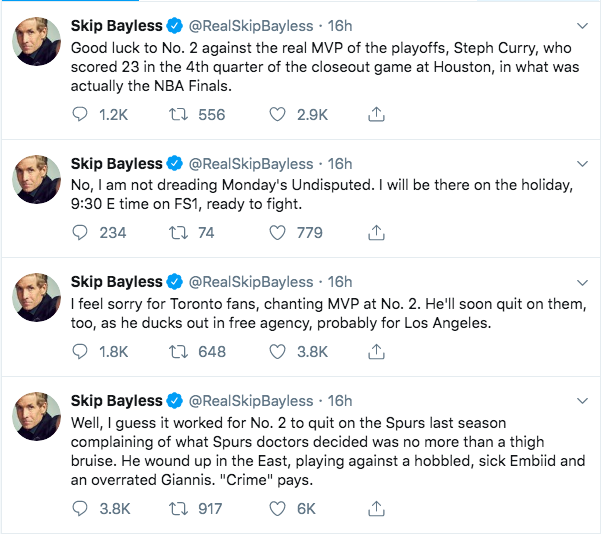 Give it a rest skip. Get some sleep man. Klaw is a monster. Get that hate out your heart https://t.co/IcdJXs2jM4

He won’t, of course. Either Bayless has gone off the deep end and thinks people care or he knows exactly what he’s doing and is just being a troll so we’ll all talk about him. Either way, there’s no real scenario here, aside from a mea culpa that will never come, where Bayless doesn’t come out of this looking pathetic. Though to be fair, that’s nothing new.