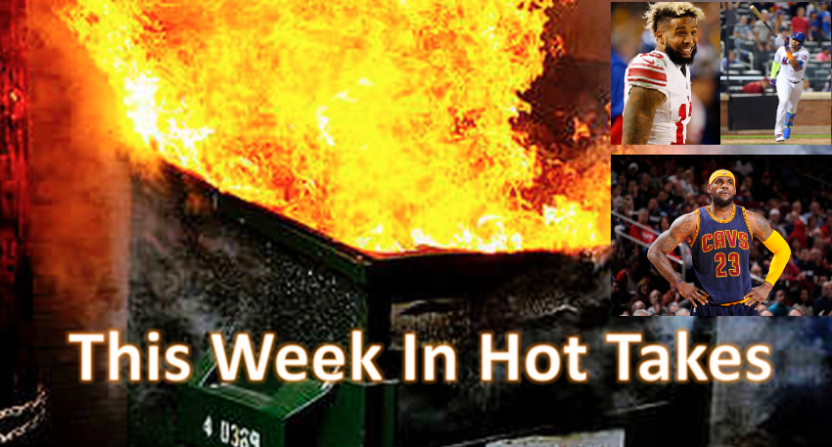 Welcome back to This Week In Hot Takes! We’re back after a one-week absence; consider yourselves reprieved, March 2-8 hot takers. This time around, we’re looking at the hottest takes from March 9-15.

5. Max Kellerman argues that Russell Westbrook should have gone to the Lakers, not to win titles but because “Where would you rather win a championship, in Oklahoma City or in Los Angeles for the Lakers?”

First Take is usually known for Stephen A. Smith’s hot takes, and we’ll get to one of those in a minute, but co-host Max Kellerman brought some fire of his own this week with a take that Russell Westbrook “should have left” Oklahoma City:

Opinionists telling players where to play is never a good look, but this one’s particularly weird because it just revolves around geography. If you make an argument that players should always choose where they have the best chance to win a championship, that’s still not a good argument, but there’s at least some logic to it. But the Lakers aren’t necessarily in any better position to win than the Thunder, and Kellerman’s just arguing that it’s better for anyone to live in L.A. than Oklahoma City, which is pretty insulting to his non-L.A. viewers. His point that the Thunder could have done more to surround Westbrook, Kevin Durant and James Harden with top talent while they had all three is valid, but the rest of this argument doesn’t make much sense.

4. Stephen A. Smith calls Odell Beckham Jr. video “inexcusable”: Speaking of First Take, Smith came up with a delightful take in the wake of a seven-second video of New York Giants’ receiver Odell Beckham Jr. surfacing Friday. The video involves Beckham and a woman in a hotel room, with a pizza box, a cigarette or perhaps a joint, and an unidentified white powder. But it wasn’t released by Beckham or anyone associated with him.

It was released by the woman, Laura Cuenca, a French Instagram model who said this was from when she met him in Paris and spent the night with him. And she told The New York Daily News “No. He did not take any drugs!” That’s still probably not the best look in the world for Beckham, but it’s not like he’s putting this out there himself, and it’s not like this has any firm evidence of him doing anything illegal. But that hasn’t stopped the likes of Smith from calling this “inexcusable” and “stupid”:

What’s funny here too is how Smith tries to spin this to be about Beckham’s contract rather than just moralizing. Could off-field behavior impact teams’ willingness to sign Beckham to a long-term deal? Maybe, but that’s far from certain given the long list of much more problematic behavior NFL teams have overlooked in the past. This feels like mostly just a pundit looking for a player to criticize, and finding one in Beckham.

3. Cris Carter on Beckham: Speaking of unsolicited advice from great role models, how about Cris “Get a fall guy” Carter? In addition to his punditry on FS1’s First Things First, Carter has apparently taken on the role of life coach, personally training and praising Beckham last year, but now going after him:

"I'm so disappointed & I expect better from him…If you want someone to pay you as the highest-paid receiver in the history of the game, damn act like it."@criscarter80 reacts to Odell Beckham Jr.'s viral video pic.twitter.com/40RVwf0pqq

“And this matters. Your image in sports will always matter. And you are in sports, you’re not some rapper.”

Look, is it better to not be in a video like this? Sure. But what exactly is the particular objection to Beckham’s behavior? That an unmarried pro athlete had a consensual fling with a model? If that’s the case, Carter et al will have a whole lot of the sports world to criticize. Maybe you can criticize him for finding someone who thought it was a good idea to post a video of him, but handing out non-disclosure agreements when meeting someone at a bar isn’t exactly the smoothest move in the world either. And it’s not like this is when Beckham’s supposed to be in camp; it’s the offseason, and he should be able to do what he wants.

Having what might be drugs in the room is maybe more problematic, but that video isn’t much proof of anything, especially with Cuenca saying Beckham didn’t take drugs. There’s nothing here that necessarily has to impact Beckham or his contract negotiations whatsoever, and if he goes out and has an incredible season, this will long be forgotten. This has sure been an opportunity for Carter and company to climb on their high horses, though.

(Oh, and did Carter publicly rant this way when his own son, CFL wide receiver Duron, was hit with offseason marijuana charges? Those aren’t necessarily a big deal either, especially with recreational marijuana soon to be legalized across Canada and with marijuana not banned by the CFL, but actual arrests and charges seem a little more notable than this seven-second video about Beckham, which hasn’t led to any charges. And Cris Carter has his own stories of drug and alcohol abuse during the early part of his NFL career, which led to the Eagles releasing him; that involves much more than Beckham has been accused of. If Beckham’s doing anything to actually threaten his career, then some of this criticism could be more deserved, but there’s no proof of that at the moment. For now, this just seems like Carter picking a target to lob some moral outrage at.)

2. Phil Mushnick can’t wrap his head around tanking: New York Post resident grumpy old man Phil Mushnick has something new to complain about this week, and it’s tanking. Now, plenty of people have complained about tanking before, but Mushnick takes it to a new level; it appears he can’t even understand how it works. Here are some highlights from his “Absurd logic for tanking falls apart under scrutiny” column this week:

So how would tanking work? Would it be like a spinoff of Mel Brooks’ “The Producers” — how do you ensure a flop that has already flopped?

The NBA has warned the 22-42 Bulls against “tanking” by sitting regulars. At 24-41, the Knicks should regard this as a warning. Both teams need volunteers to help them lose?

Those replacing the starters aren’t eager to prove their worth? By now, season’s ticket-holders might prefer a change of cast.

In theory, we get it. But in practice, we don’t. How does “tanking” work in professional sports?

How does management, seeking to improve its draft position, persuade its current players to lose? Why would players reduce their future value by trying to increase the team’s future value?

Why and how would a pro devalue his worth to serve such a cause? Or will teams provide players bonuses — severance — for intentionally playing so poorly that they lose the games and their jobs?

…Just how does tanking work? “Go out there and stink, thus reducing your value while potentially increasing ours!”

Why would professionals — including eager-to-please rookies and career subs — help facilitate such a plan?

Of course players don’t intentionally try to lose. Even if it might be best for the team, most players still tend to try their best and to put up stats that will help them with future contracts. But that’s completely ignoring how tanking happens; from teams purposefully taking on bad contracts or not signing good free agents, from teams resting top players, and from teams trading away stars. It’s much more at the general manager level, and sometimes the coach level, than the players’ level. And that’s well-known, so it’s not clear why Mushnick is treating this idea like it’s some new concept. Maybe he never read any of the many, many pieces about how tanking actually works. But hey, he can go back to his old well of tossing out some criticisms of players who he doesn’t think are trying hard enough (who, shockingly, are not white):

Our sports already include obvious tankers who are paid a ton in the wishful anticipation that they’ll cut it out.

Yoenis Cespedes has always played big league baseball as if it’s his other job — and he doesn’t need the extra money. Now at $110 million over four years, perhaps he doesn’t.

Last week he was observed goofing off during outfield drills, thus he’s still producing more, as Sandy Alderson explained Cespedes’ round of golf while on the injured list, “bad optics.”

The Mets want Cespedes to play winning baseball, but Cespedes has to be in the mood and/or encouraged. That fits my definition of tanking.

By last September, the 25-year-old star Orioles shortstop Manny Machado, paid a paltry $11.5 million, was playing with such conspicuous indifference that YES’ Michael Kay was moved to say, “He just doesn’t seem interested.” That fits my definition of tanking, too.

In an injury-plagued 2017 where he only played 81 MLB games, Cespedes still hit .292/.352/.540 and produced 1.6 wins above replacement, while Machado produced 2.8 WAR by Fangraphs mostly for his defensive play. Yes, both players suffered a drop-off relative to some of their past success, but they were still very good, and most teams would love to have them. Complaining that they’re tanking because they don’t “hustle” enough is ludicrous, but that’s Mushnick for you.

1. Skip Bayless says LeBron is “by far the biggest self-promoter in the history of sports,” and he’s only recording triple-doubles because Westbrook did: Bayless fired up the hot take machine on Undisputed this week, arguing that LeBron James’ 28-point, 13-rebound, 11-assist game against Phoenix shouldn’t count because the Suns are lousy, but more notably, that LeBron’s engaging in “over-the-top, unbecoming self promotion” and only posting triple-doubles because Russell Westbrook did:

LeBron James sat back last year and noticed Russell Westbrook averaging a triple-double, and started thinking, 'Gee, I have to start getting triple-doubles because everybody loves triple-doubles.'

Bayless’ history of criticizing of LeBron for ridiculous things is well-established by this point, but this is one of the silliest takes in a while. LeBron wasn’t putting up the best stats he could until he saw Westbrook doing it? Oh, and if anyone knows what’s actually “over-the-top, unbecoming self promotion,” it’s Bayless; that’s been his entire career, especially when it comes to blasting LeBron. This is very the pot calling the kettle black from him.