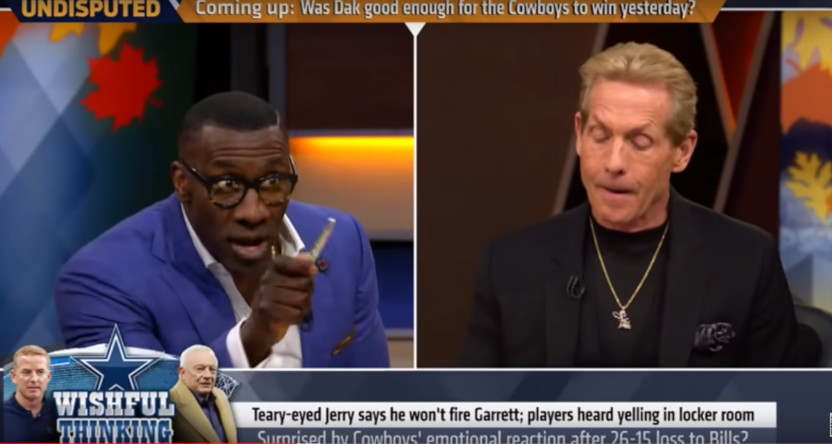 While Fox is currently trying to promote their Big Noon Kickoff ratings and claim they’re beating ESPN’s College GameDay there (they’re not, unless you use a very specific set of assumptions that only looks at the last hour, includes an extra six minutes for Fox running into the start of the game, and discounts the ESPNU simulcast, and a network TV show that’s at the biggest game of the week bragging about beating a cable show available to 35 million-ish less households would come with a grain of salt anyway), it’s worth looking back at one of their other attempted rivalries with ESPN and how poorly that’s going. That would be Undisputed vs. First Take, which really showed off a giant gap this week.

Back when Fox launched FS1 (Fox Sports One in those days) in 2013, they talked about being “an alternative to the establishment” and “the one for fun.” Two years in, they made a hard pivot to debate with the hire of controversial ex-ESPN personality Colin Cowherd, and they really embraced debate in 2016 when they brought in another ex-ESPNer, Skip Bayless. That (and the decision to schedule Bayless’ Undisputed head-to-head with his former show, ESPN’s First Take) made it clear they were taking aim at ESPN’s debate show, but they never managed to pose much competition. That was true even while First Take was on ESPN2, but it became especially true after ESPN moved it to their main network in January 2017.

(It’s disputed how much of a role Undisputed played in that move. Some inside ESPN have said moving First Take to the main network was planned before Undisputed‘s launch, but giving First Take an even bigger platform made its numbers seem even better relative to Undisputed, and that may have been part of the thinking there as well. If it wasn’t part of the given reasoning, it was certainly a nice bonus.)

In any case, Undisputed hasn’t gotten anywhere near First Take‘s numbers since the latter show moved to ESPN. And while Fox has claimed some ratings victories for Undisputed, those have been over programming on ESPN2 (usually SportsCenter), and have still paled in comparison to what First Take has drawn on ESPN. (The first link in that last line is from January 2017, shortly after the ESPN moves; the day in question there has First Take beating Undisputed 530,000 average viewers to 122,000, while Undisputed edged SportsCenter 122,000-121,000. And that link also mentions that FS1’s best Undisputed numbers to date at that point were 196,000 average viewers on Jan. 2, 2017, a day when many people were off work and a day before First Take actually moved to ESPN.

The good news for Fox is that Undisputed has continued to grow since then. In fact, they tweeted a graphic Wednesday talking about how last week was not only their best week ever for the show, but also their best day ever (on Black Friday, Nov. 29):

In a vacuum, those numbers aren’t terrible for Undisputed, and they’re certainly better than any other non-game programming on FS1. They also mark quite a bit of progress since the early days when Undisputed was regularly averaging less than 100,000 viewers. However, they’re not great by the standards of sports studio programming. As per Mitch Metcalf of Showbuzz Daily, Undisputed‘s best day ever Friday pulled a 0.14 rating in the key demographic (adults 18-49), tied for 38th amongst all cable network programming that day, and behind seven different ESPN studio shows (plus several live games on ESPN).

And all of those studio shows (plus a lot of the whole Top 150 list there; Undisputed seems to actually do better in the key demo than in overall viewers, at least relative to a lot of cable programming) handily beat Undisputed in viewers, including First Take. First Take averaged 700,000 viewers that day, not even a record for them; that record appears to be 851,000 on Jan. 16, 2017, unless they’ve beat that since January 2018). Yep, Undisputed‘s “best day ever” only pulled 52 percent of First Take‘s audience. And that appears to be closer than these shows regularly get; Front Office Sports’ Michael McCarthy wrote earlier this year that First Take averaged 472,332 viewers in June to Undisputed‘s 180,232, 38.2 percent of the First Take audience.

Again, that’s not necessarily awful for Fox. Undisputed is doing by far the best out of their FS1 studio programming (FS1 only appeared two other times on that Black Friday top 150 cable shows list, with a college basketball game tied for 115th with a 0.05 key-demo rating and 267,000 viewers, plus First Things First, also tied for 115th with a 0.05 key-demo rating but 103,000 viewers), and that isn’t nothing. But the question becomes how worthwhile it is, especially considering that they’re reportedly paying Bayless around $25 million over four years ($5.5 million a year, plus a $4 million signing bonus) and that his contract expires next summer. (It’s unknown how much they’re paying co-host Shannon Sharpe, but he did receive an extension this fall, and even reports that he makes less than half of what Bayless does would still mean he’s getting quite a bit.)

It’s clear that Undisputed isn’t catching First Take any time soon, at least under current trends. And McCarthy wrote last month that it’s possible that Bayless could return to ESPN when his contract expires and reunite with former debate partner Stephen A. Smith (who ESPN just paid a massive amount of money to stick around) on First Take. We’ll see whether that happens or not, but it is clear that Fox’s attempt to challenge First Take by hiring Bayless has produced their best-rated studio show, but one that’s still regularly drawing half or less the viewers First Take gets. And that’s the most favorable comparison to ESPN you can make for FS1’s studio programming.

So that really illustrates that in most metrics, FS1-ESPN is currently, as Cowherd would say, “not a rivalry…this is hammer meets a nail.” Cowherd said that about LSU-Alabama before Alabama went and lost that game, though, so maybe there’s hope for FS1 yet. But at the moment, it’s not only not a rivalry, it’s two cable sports channels that aren’t even playing in the same league. FS1 can compete with ESPN2 and NBCSN (they beat the former and lost to the latter in total viewership last year), but even their best studio show’s getting beaten by a lot of ESPN studio programming, and even by some lower-tier live programming (for example, 31 MLS matches on ESPN and ESPN2 this year averaged 246,000 viewers, close to this “best week ever” average of 249,000 viewers for Undisputed and above the Undisputed audience on average this year). And that raises questions about where FS1’s going to head with its studio programming, especially with Bayless on an expiring contract.