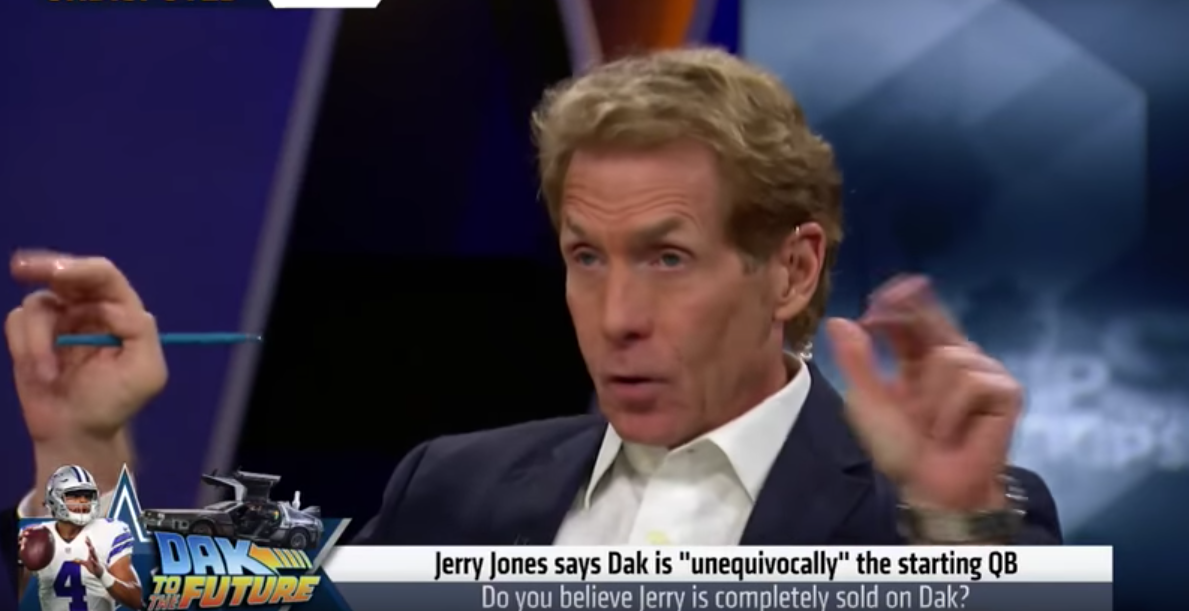 On Monday, we wrote about this oddity, which was posted the first time Skip Bayless did a Facebook Live video.

While the internet got off and running with the assumption that Bayless was just patting himself on the back, we actually verified the screenshot was indeed authentic and threw out some theories on what really happened. What we were fairly certain of was someone at FS1 was attempting to leave the comment with a fake profile (likely one of many) that they would utilize to basically inflate engagement and steer a more positive sentiment about Bayless and the lowly rated Undisputed. You’d have to imagine that if the sketchy social media tactic was in use for Undisputed it likely was something done for other FS1 programs that are struggling to get ratings (all of them).

We didn’t reach out to Fox on this one because they’re pretty selective on what type of inquiries they’ll answer (and to whom), something that isn’t lost on most folks covering sports media.

I even joked in my initial writeup:

“Bayless and Fox aren’t going to cop to this, and we’ll spare their PR department an inquiry, given they ignore these kind of inquiries and are primarily focused on sending out press releases and leaking fluff stories to the Sporting News.”

The story garnered a lot of attention on social media, and while I had my money on Fox ignoring the story, they finally gave a response. And guess what… in a shocking development, Sporting News got that exclusive story, continuing an impressive streak of exclusive Fox stories that let’s just say skew very favorably to Fox and FS1.

So anyways here is the spin, if you’re interested.

“Bayless had zero to do with that message, according to Horowitz.

Instead, it was written by one of the staffers at FS1 or Facebook involved in the Facebook Live chat, he said.”

Obviously. I was told by someone in the know “No way Skip does social media of any kind.” But who did leave this comment then?

“While Horowitz said Bayless didn’t write the comment, he’s still not sure who did.

Even after Horowitz reassured possible FS1 staffers involved there would be no repercussions, nobody stepped forward to claim the now infamous “U the Man! comment.

As for Facebook, forget it. They never give up their own.

“There was a bumpy start with the first one,” admitted Horowitz. “It was a post by someone working on ‘Facebook Live.’ That person is not in trouble — because the sentiments expressed are correct. Skip Bayless is the Man. And we do love him on ‘Undisputed.'”

Someone at Facebook? Yeah pretty sure one of those engineers sitting on a half a million dollars of stock options and knowing the company has been getting shit on for mishandling controversies like trending topics and the rise of fake news just decided I’m going to post a comment as Skip Bayless on this video, delete it quickly and hope someone sees it and it goes viral. Very plausible!

Looks like we got a REAL WHODUNIT HERE GUYS! Could be anyone… and by anyone I mean one of probably-less-than-a-handful of people who were admins on this Facebook page and were assigned to keep an eye on the video. Also, someone who likes exclamation marks.

The cute little “Skip Bayless is the man, we do love him” (from the guy who brought him over and paid him $6 million a year) joke is a nice touch, but it’s really a smokescreen for those who are put off by Bayless and didn’t react well to this story.

Horowitz is jumping on the grenade here and making that comment specifically to distract people from the issue central to the original story.  He’s basically like Jeff Goldblum in Jurassic Park lighting a flair and hoping those who really loathe Bayless and the content strategy he’s implementing at FS1 (the T-rex) will turn their attention to him instead of Bayless, the show and FS1’s social media tactics.

It’s kind of brilliant actually, as is a lot of stuff Horowitz does. Of course, I don’t buy at all that FS1 really tried to figure out how this happened and who did it, because I think it’s generally a practice they’re okay with and probably encourage in a discrete way.

If I am come off a little prickly writing this one up, I’ll just say covering FS1 during the Horowtiz era is terribly frustrating and predictable. It’s a cycle that just repeats itself and includes:

– The network bringing in controversial personalities who have some following but are disliked by the general public by a huge margin.

– Bashing ESPN and claiming they are on the brink of toppling them. Any minute now. Don’t look away. It’s about to happen. ESPN is screwed because _(insert whatever low hanging fruit there is)__. Meanwhile their strategy is bulletproof. Jason Whitlock in a fedora is destined to beat ESPN in the ratings at some point, right?

– Having programming that gets panned (expected) that doesn’t move the needle much in terms of buzz and ratings.

– Engaging with those in the industry at a frequency on par with Trump and press conferences.

– Leaking a few crumbs to the Sporting News and getting a favorable story to keep their preferred narrative going.

Unlike others, I’m not really offended by the path FS1 has opted to go down in terms of content strategy. It’s not for me, and that’s fine.

That said, the tired predictability of how they operate, respond to criticism, and engage with media as well as sports fans has worn thin. Maybe in the end, all of this will work in their favor, and we’ll certainly give them a fair shake if all of this bears fruit, but for now it’s just comes off as terribly scripted and obtuse behavior for a network that should be trying to make inroads in becoming an alternative to ESPN. I’ll go out on a limb and say Skip Bayless doing more Facebook Live videos with or without fake comments, isn’t going to change that.