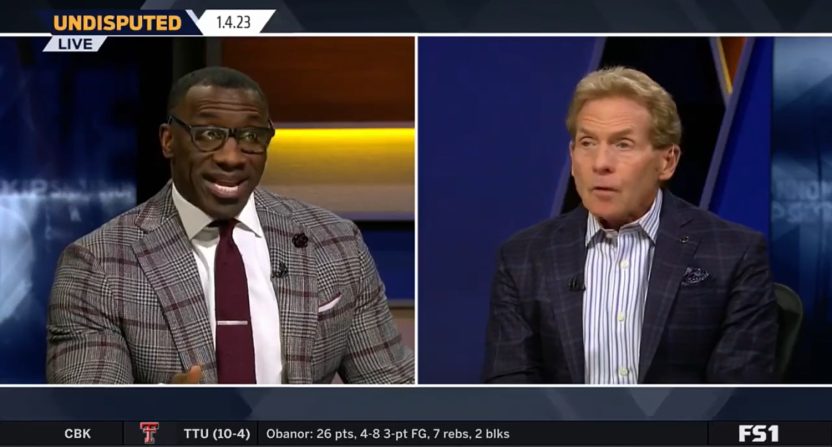 The relationship between Shannon Sharpe and Skip Bayless is reportedly on thin ice, and the FS1 duo didn’t do much to mask it Wednesday morning.

After Sharpe skipped Tuesday morning’s episode of Undisputed, speculation about his future with the show began. But he returned Wednesday morning, and promptly addressed his absence.

“There’s been a lot of speculation on why I wasn’t on-air yesterday, and I won’t get into speculation or conjecture or inuendo,” Sharpe began. “But I will say this, in watching that game on Monday night, what happened to Damar Hamlin struck me a little different.”

Buffalo Bills safety Damar Hamlin tragically went into cardiac arrest during Monday Night Football and needed his heartbeat restored on the field. He remains in critical condition at the University of Cincinnati Medical Center.. Sharpe explained that while he’s seen many devastating injuries as a former NFL player, “I’ve never seen anybody have to be revived and fight for their life on the field.”

As the Monday Night Football game was suspended, Sharpe’s Undisputed co-host Skip Bayless abhorrently sent a tweet asking how the NFL could postpone or cancel the game considering the impact it would potentially have on playoff seeding. Bayless was blasted for the insensitive tweet with people calling for him to delete it, which he hasn’t.

“Skip tweeted something and although I disagree with the tweet, and hopefully Skip will take it down,” Sharpe admitted Wednesday morning.

Bayless immediately interrupted Sharpe’s monologue and declared that he won’t be deleting the tweet because, “I stand by what I tweeted.”

Sharpe quickly erupted over the fact that Bayless would interrupt him as he was offering a monologue to explain why he missed the show a day earlier.

“I didn’t know you were gonna bring up this,” Bayless interrupted again. “I was under the impression you weren’t going to bring this up because nobody here had a problem with that tweet.”

When Bayless uncharacteristically hosted Undisputed Tuesday morning by himself, it appeared as though Sharpe may have refused to go on the show because of his co-host’s controversial tweet. Bayless was presented with the opportunity to apologize and show remorse, instead, he informed the audience that he only clarified the tweet at the request of his boss from Fox.

“Clearly, the bosses wanted you to offer explanation,” Sharpe said Wednesday morning, alluding to the fact that despite Skip’s denial, there are people at Fox who had an issue with the tweet.

“No they did not,” Bayless fired back, ignoring the fact that just 24 hours earlier he stated his boss suggested he clarify the controversial tweet.

Sharpe abruptly ended his monologue and sent the show back to their moderator Jen Hale to begin Undisputed’s planned rundown of topics. Bayless and Sharpe began their run on Undisputed in September 2016, and after more than six years as debate partners, it’s fair to wonder how much longer the show will go on.

“Thoughts and prayers remain with Damar Hamlin,” said Hale, reiterating where the focus should have been all along.