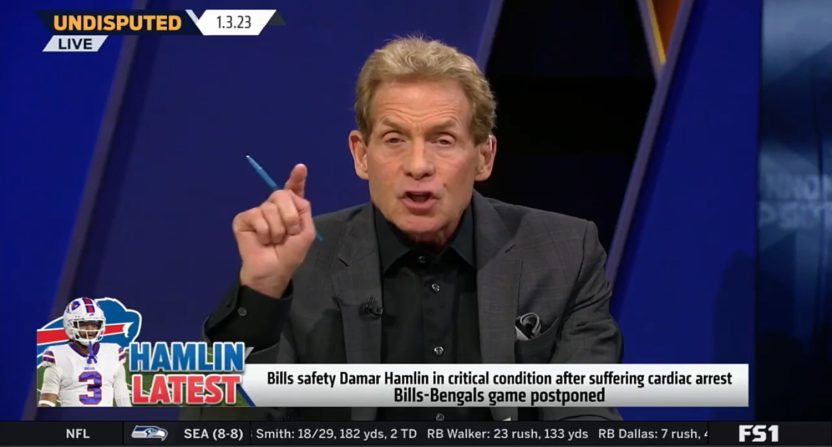 Buffalo Bills safety Damar Hamlin collapsed during their Monday Night Football game against the Cincinnati Bengals and is now listed in critical condition. Hamlin reportedly suffered a cardiac arrest, needing to have his heartbeat restored on the field.

As everyone wondered how the NFL could even consider playing football after the tragic scene unfolded, Fox Sports host Skip Bayless abhorrently wondered how the league could suspend the Monday Night Football game.

While many people hoped Skip’s tweet might knock him off the airwaves, it wasn’t Bayless who was off-air Tuesday morning, it was his co-host Shannon Sharpe. Bayless hosted Tuesday’s episode of Undisputed without his debate partner and fleetingly addressed his absence by stating, “Shannon Sharpe is not here today, I look forward to seeing him tomorrow.” Maybe Sharpe’s absence was coincidental, but the timing of his off-day was glaring considering it occurred hours after Bayless angered the entire country with a moronic take.

“We wrestled through much of the night whether to even do a show today because it felt like, in our minds, we almost can’t win with this because the last thing we want to try to do is come off as insensitive to what this young man is going through in a life-or-death situation,” Bayless continued. “The last thing we want to do is offend anyone by trying to do what we always do which is talk about sports.”

But Bayless already came off as insensitive, and he already offended millions of people Monday night when he did what he’s trained to do and acted as the contrarian, wondering how the NFL could cancel a game in the wake of tragedy. 52 minutes after his controversial take, Bayless finally sent another tweet attempting to clarify his opinion, which he later admitted was a directive from one of his bosses at Fox.

“And then came my third tweet, which I believe was widely misconstrued, misinterpreted,” Bayless said of his controversial take Tuesday morning on Undisputed. “I don’t follow what’s happening on Twitter, I just tweet. But my boss here at Fox called and said, ‘Hey, people are really reacting strongly to your tweet, maybe you should clarify.’ Which I immediately did.”

“I made the point that this late in the season, with a game of this magnitude, it’s very difficult to postpone it, yet the end of my tweet was, all of which suddenly seems so irrelevant,” Bayless attempted to explain. “For the first time in the history of the NFL, my point was, it was all rendered irrelevant by what was happening on the football field in front of all those football players…they were shaken to their foundations.”

Bayless spent nearly the first 20 minutes of Undisputed talking about the Hamlin tragedy while sitting behind a desk by himself reading from a piece of paper. Not once during those 20 minutes did he actually apologize for his disrespectful tweet. Not once did he sound remorseful or regretful.

There is a trend with the 71-year-old hot take artist. Say something offensive, lack remorse, and repeat. Bayless doesn’t break character. And so long as he continues to receive a platform from Fox, there’s no reason to think he’ll change.