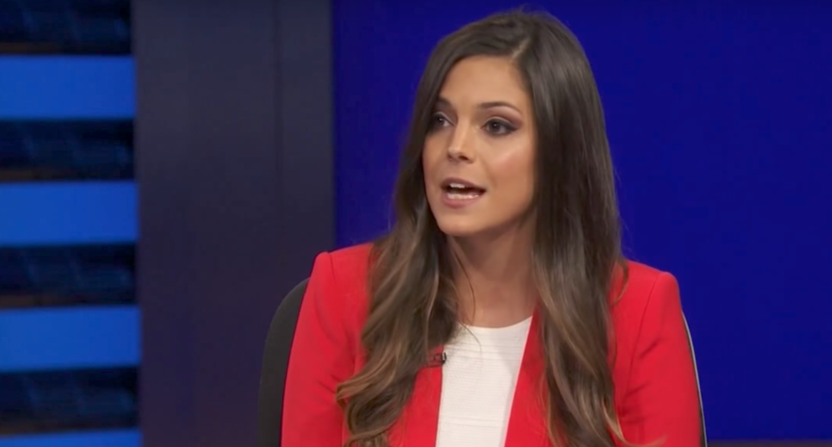 Three months after leaving FS1 for ESPN, Katie Nolan has explained what sparked the long-rumored jump.

Speaking to Richard Deitsch on the Sports Illustrated Media Podcast, Nolan said she and Fox executives had quibbled over the particulars of a possible new show and that she was hesitant to sign a new contract without having those details ironed out. When Fox Sports president Jamie Horowitz was abruptly fired amid sexual harassment allegations, she felt her show was too far down the network’s to-do list and decided she was best off leaving.

After the Super Bowl, those were the last “Garbage Time” episodes we did. We didn’t know those were gonna be the last “Garbage Time” episodes we did. We were put on hiatus. The plan was for us to move out to L.A., expand the show, which would obviously mean changing the format, and I think we would also have to leave the name because we’d be leaving the production company we’d been working at, which was Embassy Row, based out of New York. We disagreed a bit, Fox and I, on creative points and format changes, one of which being that if we were gonna expand and do five days a week we needed co-hosts. I was pretty adamant on making sure we were using co-hosts that I had chemistry with. I think chemistry is one of the most important things, especially in sports television that if you don’t have it you can’t force it. So whatever, I got caught up on that.

They wanted me to sign a new deal for a number of years and move out to L.A., then develop the new show. And I, and this is probably backwards, I wanted to make sure, I still have a couple months left on my deal, let’s develop the show now, and when we develop a show that I like, I’ll sign another deal. But we weren’t on the same page on that.

And then, of course, there were leadership changes at the organization, and I just knew they had bigger things to deal with that were going to take precedence over figuring out my contract and my creative — things that probably seemed to them like little things but to me were my future and my career. And so I talked to Eric Shanks. We had a very difficult phone call, not because of anything he did — I have so much respect for him, and we have a great relationship — but it was difficult because it’s really hard to stand up for yourself in a situation like that and say, like, “Hey, I get it, we’re not seeing eye to eye, it’s been seven or eight months at this point that I’m not working, and I’m starting to go insane.”

Nolan explained that after years of focusing intently on her work, she struggled in adjusting to sitting idle as she waited for a new show. She said she was anxious to work again and felt she’d be able to do so more quickly at ESPN than at Fox.

I’m starting to get really disoriented about who I was, what mattered, if I was worth it, if I was ever going to work again. It started to get really irrationally dark for me for a while. So I talked to Shanks and said, “You’ve got a lot on your plate obviously, you’re doing the jobs of multiple people now, given what happened, and I know I’m not going to be your top priority, and I understand that, but you have to let me go. I just have to get back to work.”

And he wasn’t like, “Go ahead, bye,” he was like, “We would love to keep you, and I don’t want to let you go, but I hear you, I understand you, and if what you’re saying is that this is really what you want, then we’ll let you go.” It was really, really tough. It was probably one of the toughest conversation that I’ve had, but to be honest I was pretty proud of myself that I had the guts.

Deitsch also asked Nolan about the comments on Desus & Mero about Donald Trump  that earned her a scolding from ESPN higher-ups. She said the incident taught her about how intense of a microscope ESPN finds itself under.

I recently learned he lesson that there is a lens on ESPN that I certainly misjudged or underestimated in this current moment that people are focusing on, looking for, interested in seeing people confirm what they already think about this network. So if I were to say I don’t feel as free, that’s not because I feel like I can’t say what I want. I would say it’s because I feel like people are waiting for me to say something so they can use it to prove a belief they already have.

ESPN, of course, has faced the claim of liberal bias over the past few years, with Jemele Hill’s comments on Trump last summer the most recent flare-up of a right-left culture war over the network’s “politics.”

With that firestorm seemingly in mind, Nolan told Deitsch she regrets calling Trump a “fucking stupid person,” saying she didn’t give the remark much thought and was just “talkin’ to my friends.”

If I could go back I would have just not said it. It isn’t an opinion that I hold so strongly and need the world to know that I was standing on a soapbox and taking a stand. If I was going to make an argument about anyone, I would make a much stronger, more informed argument.

There’s obvious no excuse to dismiss what I said, but I will say I was just talkin’ to my friends and just off-hand dismissed him in a way that — I curse a lot, and I did.

Nolan has appeared on numerous ESPN shows since joining the network in October, including Highly Questionable and SportsNation. Her new podcast “Sports?” debuted Wednesday, and ESPN has announced she will have a digital show as well.